PARASTRATIOSPHECOMYIA stratiosphecomyioides, Micropachycephalosaurus hongtuyanensis, Aquila chrysaetos simurgh. Put yourself in Noah’s position, when he had the tedious task to select two of every kind for his Ark. Would you be able to spell, let alone identify this fly, dinosaur and eagle?
It might be a bit easier for the bug Orizabus subaziroI, which can be read either forward or in reverse direction, the beetle Agra schwarzeneggeri, the spider Calponia harrisonfordi or the ant Proceratium google. But have you ever heard of them?
Unlike Noah in the Genesis, you could now just flash your smartphone, open the DNA Barcode App, scan every animal passing by, the name would pop up on your screen, and you could tick it off the list.

This app works just like the scanner of a supermarket, which distinguishes, for instance, different cans of tomato soup and shows their price, using the little black stripes of the Universal Product Code (UPC).
Instead of the black stripes on a can, this new gimmick uses snippets of the DNA, the genetic information of every living being, to tell you whether you deal with the cicada Zyzza or the sponge Zyzzya. Two items may look, or sound, very similar to the untrained eye or ear, but in both cases the barcodes are distinct. Filling the Ark is dead easy now.
The world’s oldest profession
SOUNDS a bit too much like science fiction? Sorry to say, you are right. Even though science has made tremendous progress and we now have an electronic catalog of almost all known plants and animals, such scanner of the “Barcode of Life” is still a long way ahead. More on this later. For now, luckily the good old taxonomists are still out there to help you.
Read on...
Posted by Jon Downes at 12:51 PM No comments:

Oll Lewis has been forced to withdraw from this year's lineup for family reasons. We wish him well.

His replacement will be announced in the next few days. However, his absence leaves us with another issue. For some years he has been the man behind the cameras filming the show. Can I have a volunteer?

We provide the cameras, all you have to do is sit comfortably, watch the talks and point the cameras in the right general direction....
Posted by Jon Downes at 12:42 PM No comments:

A REPORT ON THE RYEDALE AQUARIST SOCIETY OPEN SHOW 2013

Text and photographs by Dr. David Ford of Aquatic Services

Sunday 19th May was the usual date for the North Yorkshire Aquarium Fish Club, Ryedale Aquarist Society, to hold its Open Show & Auction, held as before in the Old Malton Memorial Hall in Malton ("no smoking and no alcohol", but two large halls and good parking).

However, the Club Committee were worried about attendance because it coincided with the annual Malton Food Lovers Festival (over 150 stalls of exotic foods from Yorkshire and the World) and Scottish clubs' Open Shows, taking aquarists from and Teesside as well as . But there are many supporters of this busy Club and over 100 turned up for the 13 ‘lot’ Auction, with 213 exhibits entered over 40 Classes in the Open Show- more than previous years at this venue. 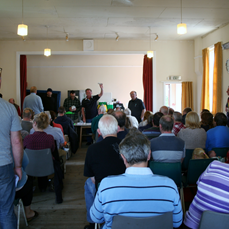 There was hot & cold food available all day and an aquarium accessories  stand by Fishphilosophy of Worksop. Many sponsors supplied prizes and free samples for this Open Show including Seaquarium, Waterlife, Reef One, JMC, Ferrybridge Aquatics, SAK fish foods, as well as the FBAS Support Packs by Tetra and . 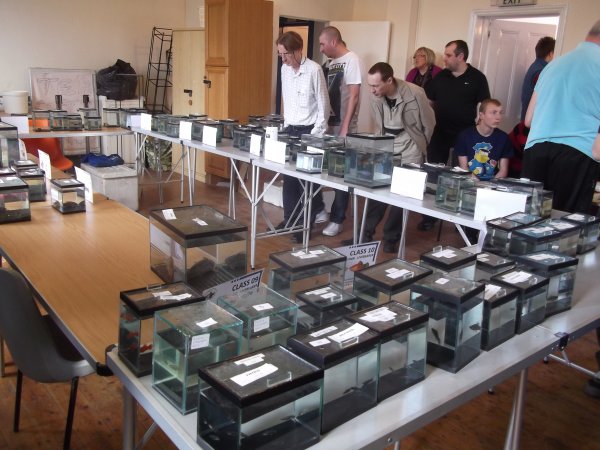 Part of the busy Show hall.

is actually part of the Yorkshire Association of Aquarist Societies and it was their judges that pointed the fish: Trish Jones, Trevor Douglas, Kevin Webb and Paul Brown.

The Best in Show winning cichlid.

Show Secretary Mr. David Marshall asked if I would thank, on behalf of the Ryedale members, the small army of helpers from both the Y.A.A.S. and Caer Urfa (South Shields) A.S. for their wonderful help, the exhibitors who brought along their best fish, the people who brought their auction ‘lots’, aquatic industry and tourist attractions for their generous support, to all the friends of the Society who made the journey to take part in the day and the large number of interested visitors from the Ryedale area and beyond who came along to view the fish exhibits.

As stated, is a busy fish club and if you are a Northern aquarist you would be welcome at their monthly meetings - the venues change but are always around the area. - details from www.ryedaleaquaristsociety.co.uk .

A special open event will be held on Sunday 8th September 2013 when the Ryedale A.S. will be holding a 'Fun Day' at Middleton Village Hall, ,
YO18 8PA. Start time 10.00am. Reptile and amphibian expert Mr. Martin Lees will present a talk entitled 'creating a vivarium with running water' and the PRO from The Deep at will be presenting a talk on the work of the Aquarium. 10 Class fish Open Show plus much more.

Next week, Richard Freeman, my old friend and colleague of the past 16 years is off to Sumatra for the fifth time. He will be accompanied by artist Adele Morse and film maker Christophe Kilian, and they will spend the next two and a bit weeks searching for evidence of the elusive orang pendek, which - if you didn't already know - is a semi-mythical upright walking ape which has been reported from the island for hundreds of years. They will be going to Gunung Tuju but also visiting the Kubu people, and there will be reports on the CFZ blogs as we get them.

*  Jon Downes, the Editor of all these ventures (and several others) is an old hippy of 53 who - together with his orange cat (who is currently on sick leave in Staffordshire) and two very small kittens (one of whom is also orange) puts it all together from a converted potato shed in a tumbledown cottage deep in rural Devon which he shares with various fish, and sometimes a small Indian frog. He is ably assisted by his lovely wife Corinna, his bulldog/boxer Prudence, his elderly mother-in-law, and a motley collection of social malcontents. Plus.. did we mention the orange cat?
Posted by Jon Downes at 12:00 PM No comments:

On this day in 1840 Samuel Morse received the patent for the telegram, which led to the invention of the telegraph, the last of which will be sent at the end of this month in India.
And now the news:


A scene from the rather good film “Clue” that illustrates the death of the telegram:
http://www.youtube.com/watch?v=Ui337e5D50E
Posted by Jon Downes at 11:00 AM No comments: