The Real Story Behind The Loch Ness Monster Hoax

Cryptonewsology
The myth of the Loch Ness Monster has always overshadowed any real evidence of its existence. And though many elaborate hoaxes have been ... 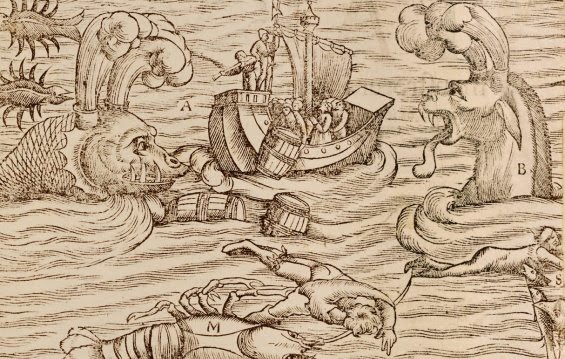 CryptoSightings
Bigfoot sightings 2015 has a new report from the Mogollon Rim area of Northern Arizona. The sighting of Bigfoot contains some very interesting ...

Sasquatch Chronicles
Dale Graham recounts the details of a bigfoot sighting from the remote spot where it happened. If the video doesn't play below, click here.
Posted by Jon Downes at 11:50 AM No comments:

www.gonzomultimedia.co.uk/about.html
Seventeen years ago, Graham and I made a film in Mexico, and we both fell in love with the place. We have warm memories of the places and the people (except for one bunch of bent policemen who tried to shake us down for ten grand in permits). Cinco de Mayo (Spanish for "fifth of May") is a celebration held on May 5. It is celebrated in the United States and in Mexico, primarily in the state of Puebla,where the holiday is called El Día de la Batalla de Puebla (English: The Day of the Battle of Puebla). Mexican Americans also often see the day as a source of pride; one way they can honor their ethnicity is to celebrate this day.The date is observed to commemorate the Mexican army's unlikely victory over French forces at the Battle of Puebla on May 5, 1862, under the leadership of General Ignacio Zaragoza Seguín.
Así que en nombre de mis amigos y colegas mexicanos, que todos tengan un feliz cinco de mayo.
THE GONZO TRACK OF THE DAY: Steve Hackett Acoustic...
http://gonzo-multimedia.blogspot.co.uk/2015/05/the-gonzo-track-of-day-steve-hackett.html
Oliver Sheppard Interviews Steve Ignorant (Intro)
http://gonzo-multimedia.blogspot.co.uk/2015/05/oliver-sheppard-interviews-steve.html
THOM THE WORLD POET: The Daily Poem
http://gonzo-multimedia.blogspot.co.uk/2015/05/thom-world-poet-daily-poem_5.html
Steve Howe - The making of 'Yours is no disgrace'
http://gonzo-multimedia.blogspot.co.uk/2015/05/steve-howe-making-of-yours-is-no.html
Merrell Fankhauser: Calling from a Star - US Book ...
http://gonzo-multimedia.blogspot.co.uk/2015/05/merrell-fankhauser-calling-from-star-us.html
The Gonzo Weekly #128
www.gonzoweekly.com
Kingsmen, Lou Reed, Iggy Pop, Camel, Gong, Daevid Allen, The Invisible Opera Company of Tibet, Gretchen Peters, Roy Weard, Dogwatch, That Legendary Wooden Lion, Ibeyi, Ringo Starr, Malachite, Hawkwind, Jon Anderson, and Yes fans had better look out!
The latest issue of Gonzo Weekly (#128) is available to read at www.gonzoweekly.com, and to download at http://www.gonzoweekly.com/pdf/. It has the greatest rock song of all time on the cover, a potted history of the Louie Louie story inside, together with a backstage look at the recent Drones for Daevid concert by Tracy from the Invisible Opera Company, the story of Camel and The Snow Goose by Doug Harr, new columnist Lee Walker on Gretchen Peters, Jon critiquing Ibeyi and Ringo Starr, as well as the new Lou Reed biography, the legendary Roy Weard starts a regular column.We send the lovely Babz from Malachite to a desert island, Neil Nixon reports on an even stranger album than usual, Wyrd gets down with the kids, Xtul gets even more peculiar, and there are radio shows from Strange Fruit and from M Destiny at Friday Night Progressive, and the titular submarine dwellers are still lost at sea, although I have been assured that they will hit land again soon. There is also a collection of more news, reviews, views, interviews and pademelons trying to choose (OK, nothing to do with small marsupials having difficulty in making choices, but I got carried away with things that rhymed with OOOOS) than you can shake a stick at. And the best part is IT's ABSOLUTELY FREE!!!
This issue features:
Jack Ely, Johnny Cash, Paul McCartney, The Grateful Dead, Ringo Starr, Noel Gallagher, Black Sabbath, Marillion, Strange Fruit, Friday Night Progressive, Keith Harris, Guy LeBlanc, Marty Napoleon,B.E.King,  Mick Abrahams & Sharon Watson, Tommy James, Hugh Hopper, Third Ear Band, WMWS, David Peel, Strawberry Alarm CLock, Eliza Carthy & Jim Moray, Tracy Austin, Invisible Opera Company of Tibet, Camel, Lee Walker, Gretchen Peters, Roy Weard, Hawkwind, Malachite, Yes, Steve Howe, Rick Wakeman, Chris Squire, Steve Hackett, Billy Sherwood, Wyrd, Stargrace, Jaz Rogers, Peter Banks, Stephen Hawking, Zayn Malik, Elton John, Jimi Hendrix, David Bowie, Elvis, Yes, Lou Reed, Xtul, Ringo Starr, Ibeyi, Laurie Anderson, Nine Treasures


* Jon Downes, the Editor of all these ventures (and several others) is an old hippy of 55 who - together with an infantile orange cat named after a song by Frank Zappa puts it all together from a converted potato shed in a tumbledown cottage deep in rural Devon which he shares with various fish, and sometimes a small Indian frog. He is ably assisted by his lovely wife Corinna, his bulldog/boxer Prudence, his elderly mother-in-law, and a motley collection of social malcontents. Plus.. did we mention the infantile orange cat?
Posted by Jon Downes at 11:40 AM No comments:

ON THIS DAY IN 1494 - Christopher Columbus sighted Jamaica on his second trip to the Western Hemisphere. He named the island Santa Gloria.
And now some more recent news from the CFZ Newsdesk

AND TO WHISTLE WHILE YOU WORK... (Music that may have some relevance to items also on this page, or may just reflect my mood on the day, and as it is a Tuesday it is chosen by Jessica not me honest)
Posted by Jon Downes at 9:43 AM No comments: