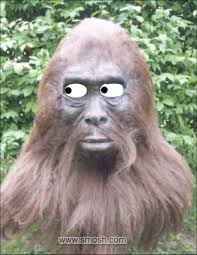 The first thing that I saw when I opened my emails this morning was Loren's well reasoned announcement that it has been claimed that Melba Ketchum's long awaited paper describing the sequencing of the sasquatch genome was to be finally published this week in the Journal of Advanced Multidisciplinary Exploration in Zoology.  The details are.

The second thing I received was a bunch of venomous emails deriding Dr Ketchum from people that I have never heard of. I deleted them and got on with my morning activities.

However, events have trundled on, and now an online publication called Denovo claims to be publishing the paper. The Journal of Advanced Multidisciplanary Exploration in Zoology certainly seems to exist (despite claims on the internet) but their website is rudimentary and the links are dodgy. It seems to be published by a bunch called SCHOLASTICA (who sound somewhat like a Britpop band from twenty years ago) who claim to provide a service whereby you can...

"Manage and publish your existing journal, or lead the Open Access movement in your field by starting a new journal. Scholastica makes it easy to collaborate on a journal and publish scholarship at the click of a button. Scholastica puts control over scholarly publishing back into the hands of scholars."


Gosh. And Denovo? They appear to be a website which it is claimed is owned by Melba Ketchum. I tried to log in to their press room, but I have no press card, and apparently as I am not a journalist I am not trustworthy enough to have access. I used to do contract work for the News of the World so my honesty and probity should be above suspicion. So I wrote:

To whom it may concern:

Whilst I do not have an accredited press card, I am the editor of the world's oldest cryptozoological journal, and the daily online magazine http://forteanzoology.blogspot.com/ which gets hits of between 2-5,000 every day. I also present a monthly webTV show about cryptozoology, which has preoduced more than 60 episodes.

Would it be possible for me to have access to your press room?

Yours faithfully,
Jon Downes
(Director of the Centre for Fortean Zoology)


I totally agree with Loren who writes that he looks forward to reading the entire paper. So do I. And, I would like to state publically that no-one would be happier than me if this paper does prove the existence of the elusive North American manbeast. However, the confusion surrounding the journal which is doing the publication, the fact that the original citation says that the paper was published last month, the fact one of the journals claimed for publishing the thing seems to be a website owned by the main author, and the other appears to be an open access POD operation which doesn't actually show the title in its catalogue does not do the credibility of the paper any favours.
I want to stress that I am not mud slinging. No-one knows better than me that the internet is a bloody bear pit, and that it is very easy to become the sacrificial victim of a self righteous mob. I have been in that position on several occasions, and it is not a pleasant place to be. I would urge everyone to sit back and wait for the paper to be published. The personal attacks on Dr Ketchum are completely out of order, and I think that those responsible should be ashamed of themselves.
Posted by Jon Downes at 1:48 PM 1 comment:

Last week I was taking time off because of a medical condition. Its time for me to get back to regular blogging now.

New at the Frontiers of Zoology:
http://frontiersofzoology.blogspot.com/2013/02/julia-pastrana-comes-home.html
And Benny has a Valentine's Day theme at his blog for Thelma Todd:
http://benny-drinnon.blogspot.com/2013/02/happy-valentines-day.html
(Benny says he might do a second one at his other blog tomorrow)
Posted by Jon Downes at 1:36 PM 1 comment: 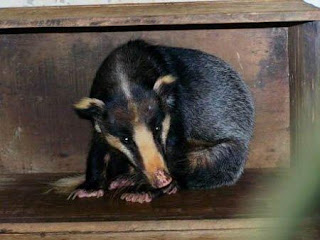 I know nothing about this at all except I found it on China`s equivalent of Google, baidu.com. When I clicked on it I was taken to a hairless civet cat!

JON: I believe it is a balding masked palm civet
What do you think?
Posted by Jon Downes at 1:33 PM 3 comments:

I seem to spend my whole time writing about the status of my computers and internet access. It is not just that the aetiology of it all is rather interesting, and that the progress of events is even more so, but that in only a few short years we have all become so completely reliant on computers that we are really up the proverbial gum, tree without them. Yesterday, the promised improvements from BT came to pass, and I went from .20mbps to over 160 (which is about half of what it should be, but still a massive improvement). Dave B-P did some other telephone stuff and prepared to leave, but by the time he went the clocked rate had plummetted to nearly zero, and it stayed there until about 10:00PM when it rose slightly. This morning it was over 100mbps which was somewhat encouraging, but it has been dropping slowly ever since. Like Dave says, it seems that whatever BP did to fix the line has come undone...

*  Jon Downes, the Editor of all these ventures (and several others) is an old hippy of 53 who - together with his orange cat (who is currently on sick leave in Staffordshire) puts it all together from a converted potato shed in a tumbledown cottage deep in rural Devon which he shares with various fish. He is ably assisted by his lovely wife Corinna, his bulldog/boxer Prudence, his elderly mother-in-law, and a motley collection of social malcontents. Plus.. did we mention the orange cat?
Posted by Jon Downes at 1:24 PM 1 comment:

On this day in 1542 Catherine Howard, the 5th wife of King Henry VIII was executed at his behest. She is reputed to haunt Hampton Court Palace.
And now the news:

The ghosts of Hampton Court Palace:
http://www.youtube.com/watch?v=3PUlimd-VKY
Posted by Jon Downes at 12:23 PM No comments: