A deadly black widow spider Latrodectus mactans is settling into a new life at Stratford-upon-Avon Butterfly Farm after being found in a VW campervan imported from California, USA.

The campervan was imported from Sacramento, California, last October by a couple (who do not wish to be named) who bought it from the states unaware of its potentially dangerous passenger. 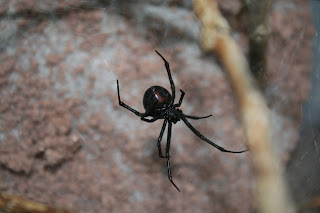 The deadly find was discovered by a mechanic working underneath the vehicle, who after power washing the underside noticed a small black spider with a red hourglass marking on the underside of its abdomen.

We then collected the unwanted stowaway and it now resides in my "nasties" tank - a locked and alarmed biological hazard enclosure devoted to venomous species located in Arachnoland, near Insect City. 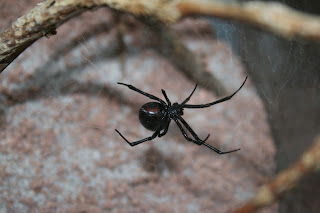 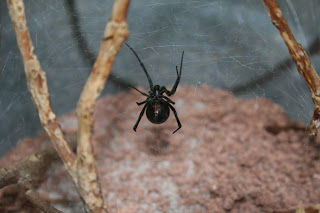 Black widows are extremely venomous and though they do not always cause death, because they only inject a small amount of venom, their bite is extremely painful and symptoms can last for several weeks if one is lucky enough to survive. 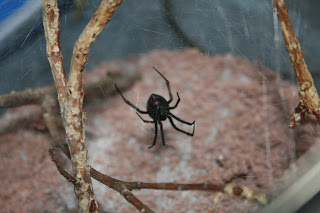 Also a few weeks ago I was asked to collect a "small banded snake" from an elderly gentleman's garden in Stratford which turned out to be a harmless baby corn snake Pantherophis guttatus; obviously an escaped pet!

Both of these unusual visitors can now be viewed in complete safety at Stratford Butterfly Farm.

For more information visit
www.butterflyfarm.co.uk
Posted by Jon Downes at 1:55 PM No comments:

Blog Talk Radio
Twenty-three years ago I saw my first Bigfoot footprint in the woods. ... This book is a compilation of my experiences in the forests where Bigfoot lives.

SC EP:141 Sasquatch running down the hill
Blog Talk Radio
Twenty-three years ago I saw my first Bigfoot footprint in the woods. ... This book is a compilation of my experiences in the forests where Bigfoot lives.

Man Thinks He Found Mother And Baby Bigfoot Tracks
Bigfoot Evidence - Blogger
When people think about bigfoot,t hey naturally think about giant feet, but bigfoot isn't born that way. This man believes he has found the tracks of a ...

Bigfoot filmed at Bluff Creek 2008...The Story of How We Got this Important Footage
Squatchable
Friday, August 28, 2015. This is a record of the events that led up to the filming of the Sasquatch only .2 of a mile from the Patterson Bigfoot film site.

This Finland Bigfoot Story Is Really Creepy (Video)
Before It's News
The Fear Channel on Youtube shares this creepy bigfoot story all the way from Finland. Have you ever heard of a bigfoot running down a wall like a ...

The Patterson-Gimlin Film of Bigfoot: What Skeptics Still Struggle to Explain
The Ghost Diaries
In the 40+ years since the release of this alleged Bigfoot documentation dozens of brains have picked over its every detail. Some such as the late Dr.
Posted by Jon Downes at 1:00 PM No comments:

THE GONZO BLOG DOO-DAH MAN HAS A HOLIDAY FROM BANKING

www.gonzomultimedia.co.uk/about.html
I rather like wet Bank Holiday Mondays. Autumn is my favourite time of year, season of mists and mellow fruitfulness and all that jazz. But I am very much aware that this is y last Bank Holiday until what is euphemistically known as the "Festive Season", and then it all begins again. Jessica and I are still sorting out the office, so be aware that this is another week in which blogs may well come in at unusual times...
THOM THE WORLD POET: The Daily Poem
http://gonzo-multimedia.blogspot.co.uk/2015/08/thom-world-poet-daily-poem_31.html
THE GONZO TRACK OF THE DAY: The Boomtown Rats - Li...
http://gonzo-multimedia.blogspot.co.uk/2015/08/thom-world-poet-daily-poem_31.html
YES AND TOTO'S REPLACEMENT PLAYERS HAD A NIGHT OF ...
http://gonzo-multimedia.blogspot.co.uk/2015/08/yes-and-totos-replacement-players-had.html
How Can Frank Zappa's Colorful Life Possibly Fit i...
http://gonzo-multimedia.blogspot.co.uk/2015/08/how-can-frank-zappas-colorful-life.html
Fairport Convention and stars of folk in Ilfracomb...
http://gonzo-multimedia.blogspot.co.uk/2015/08/fairport-convention-and-stars-of-folk.html
Gonzo Weekly #145
www.gonzoweekly.com
Hawkwind, Twink, Stackridge, Alice Cooper, Robert Plant, Roy Weard, Dogwatch, That Legendary Wooden Lion, Hawkwind, Jon Anderson, and Yes fans had better look out!
The latest issue of Gonzo Weekly (#145) is available to read at www.gonzoweekly.com, and to download at http://www.gonzoweekly.com/pdf/. It has Dave Brock from Hawkwind cutting his birthday cake (picture courtesy Brian Tawn) on the front cover together with a round up of what is coming up for the Grand-daddys of Space Rock, We also have an exclusive interview with Twink about his new album - a sequel to the legendary Think Pink, and a look at the history of Stackridge to tie in with the band's last ever gigs. Doug looks at Alice Cooper, Lee at Half Man Half Biscuit, Jon muses about Robert Plant. Thom waxes all poetical like, whilst the legendary Roy Weard continues his regular column. And there is a radio show from M Destiny at Friday Night Progressive, and the first of four Strange Harvest radio specials from the folk wot bring you Strange Fruit. There is also a collection of more news, reviews, views, interviews and water opossums with something to lose (OK, nothing to do with small marsupials planning to pray to St Anthony of Padua for an intercession, but I got carried away with things that rhymed with OOOOS) than you can shake a stick at. And the best part is IT's ABSOLUTELY FREE!!!
This issue features:
Robert Plant, Kenney Jones, Rufus Wainwright, The Who, Barbara Dickson, Bob Dylan, The Zombies, Steve Hackett, Strange Fruit, Friday Night Progressive, Russell Henderson, Rick Wakeman, The Boomtown Rats, Karnataka, Twink, Alice Cooper, Stackridge, Ade Macrow, Lee Walker, Half Man/Half Biscuit, Roy Weard, Hawkwind, Dave Brock,
Lemmy, Motorhead, Jess Heard, Bee and Flower, Beatles, Elvis, Haight-Ashbury, Neil Nixon, William Basinski, Huldre
Read the previous few issues of Gonzo Weekly:
Issue 144 (Percy Jones cover)
http://www.flipsnack.com/9FE5CEE9E8C/gonzo143.html
Issue 143 (Billy Sherwood cover)
http://www.flipsnack.com/9FE5CEE9E8C/gonzo143.html
Issue 142 (Daevid Allen and Spirits Burning cover)
http://www.flipsnack.com/9FE5CEE9E8C/gonzo142.html
Issue 141 (Rick Wakeman cover)
http://www.flipsnack.com/9FE5CEE9E8C/gonzo141.html
Issue 140 (Jaki Windmill cover)
http://www.flipsnack.com/9FE5CEE9E8C/gonzo140.html
Issue 139 (Raz cover)
http://www.flipsnack.com/9FE5CEE9E8C/gonzo139.html
Issue 138 (Galahad cover)
http://www.flipsnack.com/9FE5CEE9E8C/gonzo138.html
Issue 137 (Chris Squire cover)
http://www.flipsnack.com/9FE5CEE9E8C/gonzo137.html
Issue 136 (Neil Nixon cover)
http://www.flipsnack.com/9FE5CEE9E8C/gonzo136.html
Issue 135 (FNP cover)
http://www.flipsnack.com/9FE5CEE9E8C/gonzo135.html
All issues from #70 can be downloaded at www.gonzoweekly.com if you prefer. If you have problems downloading, just email me and I will add you to the Gonzo Weekly dropbox. The first 69 issues are archived there as well. Information is power chaps, we have to share it!
You can download the magazine in pdf form HERE:
http://www.gonzoweekly.com/pdf/
* The Gonzo Daily is a two way process. If you have any news or want to write for us, please contact me at jon@eclipse.co.uk. If you are an artist and want to showcase your work, or even just say hello please write to me at gonzo@cfz.org.uk. Please copy, paste and spread the word about this magazine as widely as possible. We need people to read us in order to grow, and as soon as it is viable we shall be invading more traditional magaziney areas. Join in the fun, spread the word, and maybe if we all chant loud enough we CAN stop it raining. See you tomorrow...
* The Gonzo Daily is - as the name implies - a daily online magazine (mostly) about artists connected to the Gonzo Multimedia group of companies. But it also has other stuff as and when the editor feels like it. The same team also do a weekly newsletter called - imaginatively - The Gonzo Weekly. Find out about it at this link: www.gonzo-multimedia.blogspot.com/…/all-gonzo-news-wots-fit…
* We should probably mention here, that some of our posts are links to things we have found on the internet that we think are of interest. We are not responsible for spelling or factual errors in other people's websites. Honest guv!
* Jon Downes, the Editor of all these ventures (and several others) is an old hippy of 56 who - together with an infantile orange cat named after a song by Frank Zappa, and a small kitten totally coincidentally named after one of the Manson Family, purely because she squeaks, puts it all together from a converted potato shed in a tumbledown cottage deep in rural Devon which he shares with various fish, and sometimes a small Indian frog. He is ably assisted by his lovely wife Corinna, his bulldog/boxer Prudence, his elderly mother-in-law, and a motley collection of social malcontents. Plus.. did we mention the infantile orange cat, and the adventurous kitten?
Posted by Jon Downes at 12:30 PM No comments:

ON THIS DAY IN 1823 - Ferdinand VII was restored to the throne of Spain when invited French forces entered Cadiz. The event is known as the Battle of Trocadero.
And now some more recent news from the CFZ Newsdesk