Ely Cathedral, proud and strong, stands atop her island surveying all below her.  In the bright sunshine she can be seen from miles away but when the mist rolls in and wraps its vaporous fingers around the fenlands, she is like a galleon in full sail riding atop the mist; she becomes the ‘Ship of the

The fenlands were once a place full of foreboding, and the boundaries – where the land gave way to the water-logged marshes – became the stamping ground of many a thief who lay in wait for unwary pilgrims on their way to the Isle of Ely to give thanks to God in the great cathedral, or for travellers who were hoping to sell their wares, make deals or just rest awhile before continuing on their journey.  The threat of eternal damnation in the fires of hell that many victims warned of whilst their meagre purses were emptied affected these robbers not. Travellers and merchants were easy prey, and the clergy were as much to be despised as the conquering Norman invaders. Such things caused these robbers no concern, for in their eyes the Lord had long since banished them from his charity.  They were already damned; the raging fires had already scorched the soles of their feet.  And when offered salvation they would merely crack a disdainful smile and laugh in the face of those who presented such weak and panic-stricken last deals.

Read on
Posted by Corinna at 1:39 PM No comments:

*  Jon Downes, the Editor of all these ventures (and several others), is an old hippy of 54 who - together with his orange cat (who is currently on sick leave in Staffordshire) and two very small kittens (one of whom is also orange) - puts it all together from a converted potato shed in a tumbledown cottage deep in rural Devon, which he shares with various fish, and sometimes a small Indian frog. He is ably assisted by his lovely wife Corinna, his bulldog/boxer Prudence, his elderly mother-in-law, and a motley collection of social malcontents. Plus... did we mention the orange cat?
Posted by Jon Downes at 12:01 PM No comments:

A RATHER DODGY PIECE OF JOURNALISTIC PRESTIDIGITATION 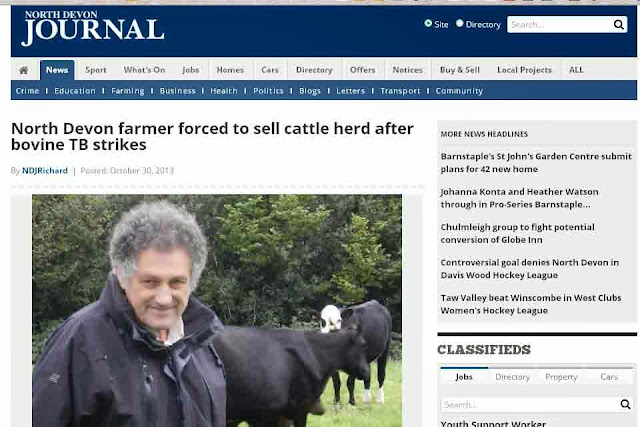 I don't like having a go at The North Devon Journal because on the whole I have had a pretty good relationship with them over the years. But this article cannot be let go without a comment. At the moment, especially in Devon and Somerset, Bovine Tuberculosis is one of those buzz words sure to cause a reaction, being the main rationale between this current government's ethnic cleansing of the badger population. So the immediate reaction many people will get from this headline is 'Poor curly-haired farmer driven into insolvency by those nasty disease-ridden mustelids.'

But that isn't what the story says at all.

Mr Pile's farm tested positive for bTB in March but 'even though the farm has gone clear after recent tests Jim has decided to wind down the cattle enterprise and concentrate on his prize-winning Border Leicester sheep'. He states that he doesn't know whether it has anything to do with badgers because he isn't a scientist and admits that he was already thinking about reducing the number of cattle he was keeping so he could concentrate on sheep.

Good luck to him.

But the way the story is presented gives a totally wrong impression.
Check out the original story


1. The Universe next Door by Judge Smith (2)
2. The Great Yokai Encyclopaedia by Richard Freeman (3)

Last month's positions in this pinky colour, which I think is called cerise. Sales in the US were about normal, but in the UK they were terrible - possibly the worst October ever. Hopefully they will improve as we approach what is euphemistically known as the "Festive Season"....
Posted by Jon Downes at 11:16 AM No comments:

Happy Halloween. Have a good one.
And now the news:


My recommendation for a horror movie to watch tonight is The Woman in Black; it's properly scary unlike most modern horror films that just shove a load of cheep actors in a house with really poor quality cameras and a vague plot outline then claims to be the scariest film of the year. Anyway The Woman in Black is a good film; watch it on lovefilm or something tonight:
http://www.youtube.com/watch?v=dPYMUnJGURI
Posted by Jon Downes at 6:01 AM No comments: