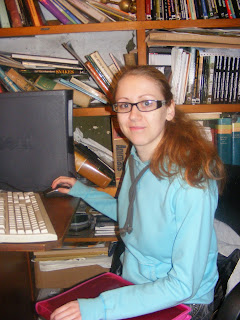 There was an earlier start to actual work today, but only slightly. I completed all of my work placement hours, for college, by 2 o’clock. I worked until 9 o’clock anyway, because there was little use in me just sitting around all day.

Saskia and Riley came by again, and she and I conducted the animal round, while Riley resumed the painting. Saskia eventually joined him. I had completed what I was doing with the Eberhart book and went back through it to check for things I had missed. I’m convinced somebody had messed up my columns as I definitely had them arranged nicely the day before.

When I had finished this, and setting up some of Karl Shuker’s book, I just faffed for a while and waited for tea. Luckily, “Shooting Bigfoot” arrived today, so I was able to watch it before going home. It was hilarious. I didn’t expect it to be feature length and it was upsetting when the poor doggy had its throat cut, but overall, I enjoyed watching it. I then had to convince the dog to get off me, so I could go to bed.
Posted by Jon Downes at 4:24 PM No comments:

blogspot.com
Someone just posted this screenshot from the recent Japanese Bigfoot video, showing what appears to be a man in suit wearing shoes and trousers

ARE you worried that your bees are suffering from diarrhoea?

ARE you worried that your bees are suffering from diarrhoea?
If so help is at hand as the Exeter Beekeepers’ Association is holding a special day on Saturday April 12 to detect nosema, as the condition in bees is known.
According to committee member David McLarin, nosema is becoming more prevalent in the South West and that is not good news as bees with the problem hardly produce any honey.
It accelerates their metabolism so that if they get to the end of the summer having produced very little honey meaning they could starve during the winter.
Beekeepers wanting their bees tested should take them along to Topsham Rugby Club between 10am, and 3pm on April 12.
For the test to be carried out some 25 to 30 bees have to be killed, by trapping them in a bag and freezing them to death in a freezer.
They will then be ground up and traces of gut put onto a slide and examined under a microscope.
If nosema is detected the only treatment is for the bees to be given a new hive.
Read more: http://www.exeterexpressandecho.co.uk/Exeter-Beekeepers-8217-Association-hold-day/story-20752347-detail/story.html#ixzz2xkEugXQ6
Posted by Jon Downes at 12:54 PM No comments:

www.gonzomultimedia.co.uk/about.html
My Robot Army of the Undead and I are working ourselves ever closer to World Domination. A clutch of eggs from the Columbian giant ramshorn snail and Corinna (bless her) is sorting out accommodation for them. She went out and bought me a palatial breeding cage for them yesterday; they will need it because they will only be match-head sized when they hatch. Sheri left with Graham this morning on the first stage of her long journey back to Yorkshire. Graham, however, is going to the laboratory supplies place in Stoke Canon following which he will be fitting new doors to my house in Exeter. In the meantime, Andrea will be here imminently and lots of exciting things involving this weekend's issue of Gonzo Weekly, Karl Shuker's new book, and Volume Two of George Eberhart's Mysterious Creatures, and Ian Abrahams' biography of The Waterboys will transpire. Oh what an exciting life we have...
Jon Anderson progresses into solo artist
http://gonzo-multimedia.blogspot.com/2014/04/jon-anderson-progresses-into-solo-artist.html
THOM THE WORLD POET: The Daily Poem
http://gonzo-multimedia.blogspot.com/2014/04/thom-world-poet-daily-poem_10.html
How ANS Founder, Dan Wooding, ‘accidentally’ Launched the career of Monty Python
http://gonzo-multimedia.blogspot.com/2014/04/how-ans-founder-dan-wooding.html
GONZO TRACK OF THE DAY: DAEVID ALLEN'S UNIVERSITY OF ERRORS
http://gonzo-multimedia.blogspot.com/2014/04/gonzo-track-of-day-daevid-allens.html
02.04.14 - Hawkwind to play Wildlife Rocks
http://gonzo-multimedia.blogspot.com/2014/04/020414-hawkwind-to-play-wildlife-rocks.html
The Kinks’ guitarist Dave Davies set to play his first London gig for many years
http://gonzo-multimedia.blogspot.com/2014/04/the-kinks-guitarist-dave-davies-set-to.html
The new issue of Gonzo Weekly is here. It features interviews with Erik Norlander on the new Rocket Scientists album, Judge Smith on the early days of Van der Graaf Generator, and Jakko Jakszyk on the forthcoming ELP reissue and the King Crimson rehearsals. There are also features on The Psychedelic Warlords, Keith Levene, Acid Mothers Temple, Galahad and more news, reviews, views, interviews and Matschie's tree-kangaroos (OK, no arboreal macropods from New Guinea, but I got carried away with things that rhymed with OOOOS) than you can shake a stick at. And the best part is IT's ABSOLUTELY FREE!!!
Check it out at www.gonzoweekly.com or http://gonzo-multimedia.blogspot.com/2014/04/gonzo-weekly-72.html
Read the last issue here
http://gonzo-multimedia.blogspot.com/2014/03/gonzo-weekly-71.html
To make sure that you don't miss your copy of this and future issues make an old hippy a happy chappy and subscribe
http://eepurl.com/r-VTD
PS: If you are already a subscriber but think that you haven't been receiving your copies please check your spam filters. For some reason known only to the Gods of the internet, some e-mail programmes automatically count the magazine as 'spam' probably because it comes from a mass mailer. Either that or they are just jealous of our peerless content
PPS: WARNING: If you are If you are a subscriber using Outlook, Hotmail or Outlook Express, some notifications and previous issues of the magazine may come out with formatting errors.
*  The Gonzo Daily is a two way process. If you have any news or want to write for us, please contact me at  jon@eclipse.co.uk. If you are an artist and want to showcase your work, or even just say hello please write to me at gonzo@cfz.org.uk. Please copy, paste and spread the word about this magazine as widely as possible. We need people to read us in order to grow, and as soon as it is viable we shall be invading more traditional magaziney areas. Join in the fun, spread the word, and maybe if we all chant loud enough we CAN stop it raining. See you tomorrow...

*  Jon Downes, the Editor of all these ventures (and several others) is an old hippy of 54 who - together with an orange kitten named after a song by Frank Zappa puts it all together from a converted potato shed in a tumbledown cottage deep in rural Devon which he shares with various fish, and sometimes a small Indian frog. He is ably assisted by his lovely wife Corinna, his bulldog/boxer Prudence, his elderly mother-in-law, and a motley collection of social malcontents. Plus.. did we mention the orange kitten?
Posted by Jon Downes at 12:41 PM No comments:

On this day in 1953 the film House of Wax was premièred. House of Wax was the first major studio release filmed in 3D. 3D films have their detractors (usually the sorts of people who claim never to go to the cinema or own a TV because they erroneously think it will make them appear intelligent rather than just a skinflint) but 3 dimensions will improve even the most mediocre of films... Unless you only happen to have one eye, in which case it is a bit of a downer.

Saw this in 3D last week, highly recommended:
http://www.youtube.com/watch?v=NLWsK1ZFunA
Posted by Jon Downes at 9:41 AM No comments: