19. El Salvador
After what seems like a break we find ourselves in El Salvador. What can we say about the country? Well it’s the smallest and most densely packed of the Central American countries. It is also the only Central American country that doesn’t have a Caribbean coastline, but for today’s cryptid that doesn’t matter because our mystery animal turned up on the country’s other coast in the Gulf of Fonseca.

It was reported that in June 1928 a rather large rotting lump drifted ashore, serpentine in shape and 89 feet long, so far so good. The creature was marked with black and white stripes and had a horn protruding from its head. Sadly there isn’t much more known of this mystery animal from the deep, but as the original source stated that the remains were ‘exceedingly corpulent’ it perhaps isn’t any wonder that no one got close to the beast, just imagine the smell.
Posted by Jon Downes at 8:32 PM No comments:

I have the Frontiers of Anthropology new blog posting up already when I notice I had left something out before-
http://frontiers-of-anthropology.blogspot.com/2011/10/another-tasty-snack-from-lemurian-realm.html

Richard Freeman should be happy to know that I included the Sea Shepard emblem on the next Cedar and Willow blog entry, the one featuring Brigitte Bardot:
http://cedar-and-willow.blogspot.com/2011/10/cookie-daughter-of-willow-and.html

Posted by Jon Downes at 7:53 PM No comments:

ANDREW MAY: The Loch Ness Monster, a cloned sheep and a dubious dog

As mentioned in my previous post, the second half of Paul and Melanie Jackson's honeymoon was spent in Scotland. It comes as no surprise, therefore, to hear that they had an encounter with the Loch Ness Monster... or at least a reasonable simulacrum of Scotland's most famous cryptid

Dipu Marek is a person not a place, and there ain't no snow in the Garo Hills. But otherwise SHE IS SPOT ON! Kate's new song is a corker...

They call you an animal, the Kangchenjunga Demon, Wild Man, Metoh-Kangmi.
Lying in my tent, I can hear your cry echoing round the mountainside.
You sound lonely.
While crossing the Lhakpa-La something jumped down from the rocks.
In the remote Garo Hills by Dipu Marak we found footprints in the snow.

New blog entry at the Frontiers of Zoology with Tyler Stone as guest blogger again:
http://frontiersofzoology.blogspot.com/2011/10/tyler-stones-update-on-freshwater.html

Being an update on his theory of freshwater monkeys as accounting for Kappa-type reports (this time from North America)
Posted by Jon Downes at 12:01 PM No comments:

http://cryptozoologynews.blogspot.com/
On this day in 1901 Annie Edson Taylor became the first person to survive going over Niagra falls in a barrel. She was 64 years old when she preformed the stunt too!

People are still doing the stunt to this day:
http://www.youtube.com/watch?v=6m9DUUjNlTU 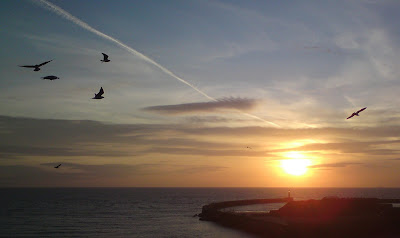 I was up bright and breezy yesterday so I thought I'd take some photos of the pier and lighthouse at sunrise.The seagulls were milling about so I fed them some bread I had taken with me.

Then lo and behold the legendry famous flying duck billed platypus swooped down and picked up some bread in it's bill.Legend says that if 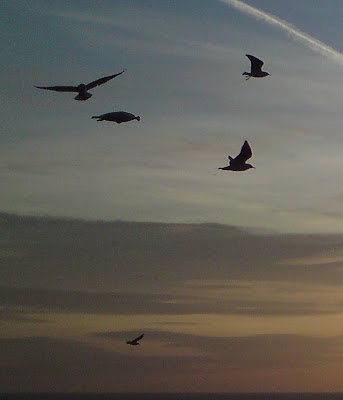 you see the flying platypus within 3 days you'll be carted off to the funny farm!

This month Japan has confirmed its whaling fleet will be returning to the Southern Ocean Whale Sanctuary to slaughter whales again despite international disgust and condemnation. In an act of cowardice that beggars belief the Japanese government has boosted security for the fleet by 17 million pounds! This makes no financial sense and it seems to have been done just to spite other countries.

“It now seems the Japanese government is simply obsessed with killing whales not for need, and not for profit, but because they believe they have the right to do what they wish and kill whatever they wish in an established international whale sanctuary, just for the sake of defending their misplaced ‘honour’. It's a disgrace”.

Anyone can see there is no ‘honour’ from the people, who at an international meeting on whaling last year tried to buy the votes of delegates from third world countries with bribes of money, alcohol and women.

Sea Shepherd will return to the remote waters for their Eighth Antarctic Whale Defense Campaign with a stronger anti-whaling fleet in early December 2011 to protect the whales.

Sea Shepherd will return to the remote waters for their Eighth Antarctic Whale Defense Campaign with a stronger anti-whaling fleet in early December 2011 to protect the great whales.
‘They will have to kill us to prevent us from intervening once again,' said Captain Watson. ‘Are the Japanese people ready to take human lives in defense of this horrifically cruel and illegal slaughter of endangered and protected species of whales? Do we have to die to appease Japanese honour?

'If so, my answer to the Japanese government is "hoka hey" - Lakota for ‘it's a good day to die' - and we will undertake whatever risks to our lives will be required to stop this invasion of arrogant greed into what is an established sanctuary for the whales.'

Operation Divine Wind will send more than 100 volunteers to the Southern Ocean Whale Sanctuary to defend the whales. ‘We intend to stop them and we will stop them - that's a promise,' said Peter Hammarstedt, first officer on Sea Shepherd ship Bob Barker.

800 whales were saved by last year’s Se Shepherd operation.
Posted by Jon Downes at 10:04 AM No comments: