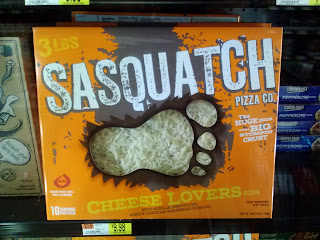 Found this at Wal-Mart yesterday.

I just had to buy it. There's even a punch out sasquatch on the back of the box!

Elizabeth
Posted by Jon Downes at 3:54 PM No comments:

VIDEO: Has the Loch Ness Monster gone on holiday to London?

Press and Journal
The age of camera phones and social media was welcomed by crypto-zoologists everywhere in the hope that definitive proof of Bigfoot, Aliens, ...
Posted by Jon Downes at 1:30 PM No comments:

If it seems 'Squatchy,' you might be on trail of Bigfoot
The Herald Journal
The existence of Bigfoot, according to many, is a fact! In a 2014 AP poll, 22 percent of Americans surveyed reported believing in Big Foot or ...

New Bigfoot Video Comes Out Of Western Australia
Bigfoot Evidence
This video has been making the rounds this week. Posted by the youtube channel Father Hamley, the video seems to show an upright creature hiding ...

Deputy Sheriff Terrified By Pacing Bigfoot In Treeline
Bigfoot Evidence
This is really cool! This is a walkie-talkie exchange from November 2005, at a BFRO outing that took place in Michaux State Forest, Pennsylvania.

New Possible Bigfoot Structures Show Up In Active Area
Bigfoot Evidence
These are some new structures I found in the area I have been investigating for about a year. New things are added to this area all the time. Thanks for ...

Possible Sasquatch Tracks In Snow Filmed In Utah
Bigfoot Evidence
Youtuber Utah Sasquatch posted this video of a possible bigfoot track find in the show in Utah. Finding trackways like this are rare, and in the snow is ...

Klamath Tribes to be featured on 'Finding Bigfoot'
Herald and News
Finding Bigfoot is a reality show documenting the search for hard evidence of the creature's existence. It premiered in 2011 and began its eighth ...
Posted by Jon Downes at 12:56 PM No comments:

ON THIS DAY IN - 1199 - English King Richard I was killed by an arrow at the siege of the castle of Chaluz in France.
And now some more recent news from the CFZ Newsdesk