Tonight on the Crypto-Kid, Colin will be joined by a mystery, fan favorite guest to discuss popular Halloween monsters and the folklore behind them. This is going to be a fantastic, not to miss episode.
Make sure you don’t miss out on the spooky good time tonight at 8 pm EST by going to www.wcjvradio.com/live 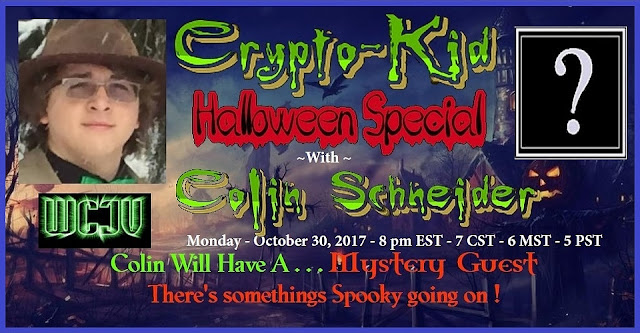 Posted by Colin Schneider at 1:25 PM No comments:

The Scotsman
The Loch Ness monster is not only a mystery but also a tourist attraction this model of Nessie is a feature at the Loch Ness Centre and Exhibition, ...
Loch Ness Monster tops poll of spooky British mysteries - HeraldScotland
Full Coverage

RobOHara.com
This month marks the 50th anniversary of the most famous Bigfoot footage of all time, shot on October 18, 1967, by Roger Patterson and his friend Bob ...

Bear, Brenda and Navajo update
Sasquatch Chronicles
Duke writes "Caveman tells us about the Bigfoot Outlaws wagon train to his area, His epic first meeting with Bear, how the conference with the Outlaws ...

ON THIS DAY IN - 1817 - The independent government of Venezuela was established by Simon Bolivar.
And now some more recent news from the CFZ Newsdesk