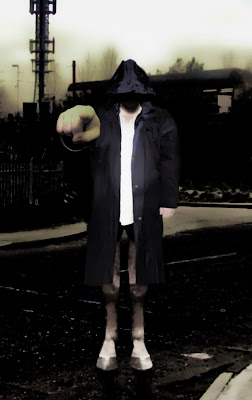 First of all I'd like to apologise for yet another long hiatus between my Geordie Monster blogs. This is due to severe on-going health problems – my own and others concerning Jackie, who is currently waiting for surgery on her spine. I'm hoping to post more regularly from now on.

Back in January I posted a story regarding a bizarre cryptid known as the Bede Horseman, a creature that is (or at least appears to be) human from the waist up, but is distinctly equine south of the border. The Bede Horseman is consistently described as having the legs of a horse or donkey.

Intriguingly, creatures of this kind can be found in many of the world's cultures including those of the Japanese, the Phillipinos, the Celts and the Arabs. In parts of Kenya the horse-man is called Mgou Wa Punda. The consistency of such reports leads me to think that it is the same phenomenon; the same species of cryptid.

So, what is the Bede Horseman and just where did he gain his odd monicker?

Well, South Tyneside also plays host to the finest local train system in the land, colloquially called “the Metro.” The carriages are always immaculately clean, the trains always run on time and the staff are incredibly helpful. I don't know what we'd do without it. The Tyneside M 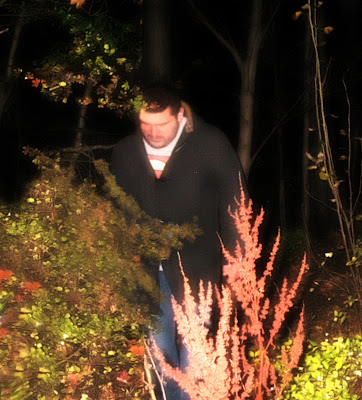 etro system serves the populace on both the north and south sides of the River Tyne, and is peppered with dozens of local stations. One of these, Bede Metro Station, can be found at Jarrow in the heart of an industrial estate. It is here where, allegedly, the Bede Horseman has made numerous appearances.

Firstly, I think it is safe to say that the creature is some sort of elemental entity. I have noticed that events of this kind tend to be more common at locations with a strong spiritual history attached to them. Only a stone's throw away from Bede Metro Station are the remains of Bede's Monastery and the ancient St Paul's Church, a place where the Venerable Bede, as he was called, penned a number of his memorable works. Adjacent to these is a park known as Charlie's Park – more correctly called Drewett's Park – which has a long history of hauntings and other ghostly phenomena.

In Arabia, particularly the Yemen, stories of a female creature called the Sayad abound. Sayad is a Jinn: an elemental creature that features heavily in Islam. Her upper half is stunningly beautiful, but her legs are those of a donkey. A similar entity to the Sayad is the Um Duwais, which also possesses the legs of a donkey or horse.

Intriguingly, the Sayad is said to disappear as soon as her secret – possessing the legs of a donkey – is discovered. The Bede Horseman is sometimes said to do the same thing. Personally, I believe that the Bede Horseman fits the description of a Jinni. The Jinn were, according to Islamic belief, created at least 2,000 years before humans. They are able to shape-shift and take on the form of humans, animals, plants and even non-living, inanimate objects. The human/equine presentation is a common one.

There is a story common in Islamic tradition about a farmer who was working in his field one day when he was approached by a man who asked for work. The farmer agreed to employ him but then noticed that his new-found labourer had the legs of a donkey. Frightened, the farmer realised that he was in the presence of a Jinn and ran away as fast as he could. After leaving his field he carried on running at full pelt down a nearby road. Then he saw someone walking towards him: a man in a long cloak with a hood, which obscured most of his face. He approached the man and in between gasps, related what had just occurred. “Honestly,” he said, “he had the legs of a donkey!” The man promptly lifted up his garment and said, “What, like these?” He too had the legs of a donkey and was also, presumably, a Jinni.

It may suprise some readers to hear me suggest that a elemental creature so intrinsically connected to Islam could pop up in an industrial estate in the north-east of Engalnd, and I sympathise. However, certain facts should be taken into consideration before rushing to judgement. Firstly, although it is generally accepted that the Jinn are divided up into clans and tribes, and are for a number of reasons restricted geographically regarding how far they can travel from their own area, they are believed to be a global phenomenon. Secondly, the Jinn do not restrict themselves to attacking (or even appearing to) Muslims. In fact, there is some anecdotal evidence that the majority of humans they interact with are not Muslim at all.


On Tuesday last, I ventured out with John Triplow, Kelly Williams and Darren W. Ritson to see if we could espy the Bede Horseman. We did not. However, I did manage to take some pictures of our expedition, two of which are included. One is an artist's impression of the Bede Horseman as he is said to appear. The other is of John Triplow as he does appear. (The differences are subtle, but easily identifiable. John, for instance, isn't wearing his hood... :)
Posted by Jon Downes at 12:37 PM No comments:

On this day in 1888 Mary Jane Kelly, the final ‘canonical’ victim of Jack the Ripper was murdered.
And now the news:

You should (you can in the UK, but I don’t know what the copyright situation is internationally) be able to watch both parts of a recent C5 documentary on JTR by clicking the following link. They supposedly faithfully recreated the murder scenes and the lighting on it so you can see just how easy it was for the killer to evade capture. It’s well worth watching:
http://www.youtube.com/show?p=Rwuj8SqfWZ8&tracker=show0
Posted by Jon Downes at 12:35 PM No comments:

DALE DRINNON: Part Three of the Sundaland series/One Million BC

Part 3 of the Lemuria=Sundaland series is up today. This is more or less a set of representative samples but I think each one is important. Most could be connected to the Frontiers of Zoology blog as well but I thought it best to keep the series together:
http://frontiers-of-anthropology.blogspot.com/2011/11/some-diagnostic-traits-of-sundaland.html

And on another note, I do have my blog up for One Million BC (the original) on Cedar and Willow:
http://cedar-and-willow.blogspot.com/2011/11/loana-cavewoman.html