Beachcombing promised a month ago a mermaid text from the Isle of Man that would amaze one and all. And what Beachcombing particularly likes about the following eighteenth-century description is the way that the we have not only mermaids but also a ‘submarine’, using the word very loosely, that makes an appearance a century before such vehicles had became part of the popular imagination.

http://www.natureconservancy.ca/site/News2?page=NewsArticle&id=14463&news_iv_ctrl=0&abbr=sk_ncc_
Posted by Jon Downes at 12:44 PM No comments:

Once again we are looking for Sponsors for the Weird Weekend.

For the second year running we're pleased to say that Tell Tale Travel have again kindly donated prizes for our raffle, including an elephant-lovers pack including a fantastic book and DVD, a £200 gift voucher towards their wildlife holidays in Thailand or a wildlife holiday in Sri Lanka as well as a £500 gift voucher towards any family adventure holiday in Thailand , all of which include the opportunity to get up and close to elephants and some weird and wonderful creatures.

Mothman, a new winged-thing, a synchronicity, and a parcel in the post... http://monsterusa.blogspot.com/2011/03/new-winged-humanoid-report.html
Posted by Jon Downes at 12:35 PM No comments:

In ‘Fortean 5s’, Forteans from around the world get the chance to pick 5 Fortean, paranormal or just unusual events that they find personally fascinating. It’s like a weird version of ‘Desert Island Disks’. If you would like to submit your 5 and I haven’t got round to emailing or facebook messaging you yet please email it to fortean5s@gmail.com , There is no need to go into quite the amount of detail I have, a sentence or two for each one is fine too I just got carried away. Without further ado, here are my selections of 5 fascinating Fortean events (in no particular order):

On the 19th of April 1828, after his wife, Ann Marten, saw visions of her step daughter Maria's ghost in a dream, Thomas Marten was persuaded to dig in search of her body. Thomas discovered his daughter's corpse in a grain barrel at the Red Barn in Sufolk, England and her former lover, who had been sending the family letters, supposedly from Maria, for the past year was convicted and hanged for her murder.

Elvis Presley’s road to Damascus moment was a very strange one and appears to make very little logical sense at all. On the 7th of March 1965 whilst taking a quick break during a trip across the desert with a few hangers on in tow, Elvis Presley claimed to have seen a vision of 'God' in the clouds, a formation that morphed from looking like Joseph Stalin to looking like Jesus Christ. According to the witnesses Elvis was visibly shaken by the event and took it as a sign that he should be acting more like Jesus and less like Stalin, who had been, with the cold war, America’s number 1 bogeyman. To my knowledge Presley could hardly be called Stalin-like, there was a distinct lack of a Gulag at Graceland, but the experience did cause Elvis to take his life more seriously after that and led Elvis to join a religious group called the Self-Realization Fellowship. As to whether he saw a legitimate sign that day in the clouds or if it was just a case of seeing vague shapes in the clouds and putting two and two together and getting 5 it doesn’t matter that much but it makes for an interesting story.

The Pied Piper of Hamelin:

On this day in 1962 the character actor Mimsy Baraclough was born. And now the news:

And here he is:

http://www.youtube.com/watch?v=tP_Ay-KXIEA
Posted by Jon Downes at 12:34 PM No comments:

DALE DRINNON REVISITES THE CASE OF THE PAULINE SEA SERPENT

http://frontiersofzoology.blogspot.com/2011/04/repost-cfz-blog-on-pauline-ss.html This is a repost of something he did some years agon, but still jolly interesting...
Posted by Jon Downes at 12:29 PM No comments: 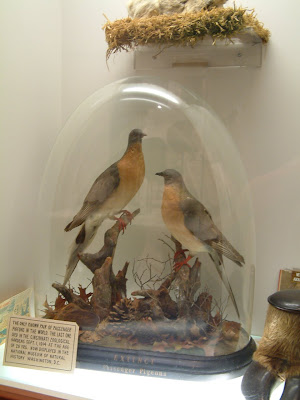 I took this picture of mounted passenger pigeons whilst in San Antonio during November 2004. It comes in useful now, as Karl Shuker writes a blog on the subject (passenger pigeons not my trip to SA)