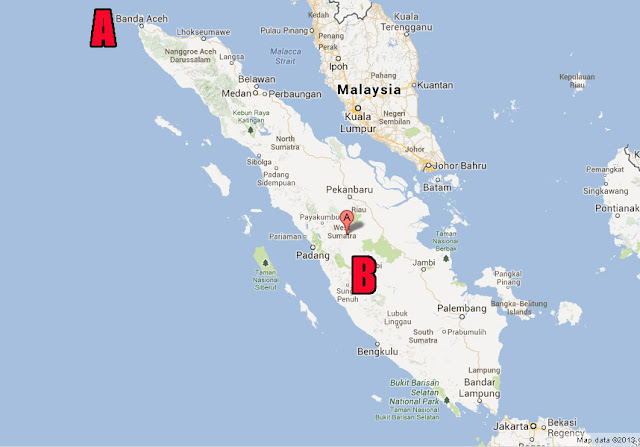 A few minutes ago I read an email from Steve Jones telling me that there has been an earthquake in Sumatra and that over twenty people have been killed. I have heard nothing from Richard, Adele and Christophe, nor do I expect to, and there is no way that I can get in touch with them.

The epicentre of the earthquake seems to be in Aceh (A) which is about 1,000 miles from Kerinci Seblat (B) where the expedition is underway. As far as I am aware there is no earthquake damage reported from that part of the island, so I hope and pray that they are OK.

Back in 2007, when the CFZ expedition to Guyana was underway, there was a minor skirmish between Guyana and (as far as I remember) Venezuela. The British tabloids elevated the status of this minor incident to that of a small war, and cryptopundits who really should have known accused me of "putting CFZ explorers lives at risk by not recalling them immediately", conveniently ignoring the fact that there was no way that I could have done so. The same applies now. I am not in contact with the team, and do not expect to hear from Richard again until he gets back to Singapore airport, late next week.

In the meantime, my thoughts and prayers are with them, and I promise that should I hear anything I will let you all know.

Posted by Jon Downes at 8:54 PM No comments:

“I found a fossilized Bigfoot skull.”
A journalist can go his or her entire life waiting to hear those six magic words. And yet, on a recent weekday afternoon, that very thing happened.
Todd May, of Ogden, dropped by the offices of the Standard-Examiner to see if someone would be interested in a story about a fairly impressive fossil find. After showing off a couple of digital photos, May offered six even more compelling words — “Do you want to see it?” — followed by the motherlode of sentences: “It’s out in the trunk of my car.”

May says he found it in the mouth of Ogden Canyon, Utah. He thinks it’s a skull because he has run into the real thing, he says, in his outdoor excursions before. First, we are asked to believe he has actually seen a Bigfoot in real life. Then, we are asked to accept that this piece rock is not just a fossil but a fossil skull. And not just a fossil skull, but a skull of Bigfoot. Talk about a stretch of credulity.

It could be a fossil. It is not a skull and it is not Bigfoot. There is a mistaken assumption that you can create lithified bone in just a little while. It takes millions of years. Here is the video of his find. He notes that HE SEES features of soft tissue, like tongue and nose. That would make this even more dubious since tongues don’t fossilize. They may mummify – but there is nothing (like bone) from a tongue that would be mineralized and end up a fossilized.

I am two thirds of the way through reading Jonathon Green's 'Days in the Life: Voices from the English Underground, 1961-71'. I read his 'All Dressed Up' some years ago and was mightily impressed, and have been meaning to read this one ever since, but never got around to it. However I was so unimpressed by Maconie's 'The People's Songs' last week, and was so unimpressed I decided that I needed some proper oral pop history. This book is not only excellent but so funny in places that it made me laugh out loud. The description of how Mick Farren tried to get a band together called 'The Pink Fairies', but merely went to gigs, got horribly drunk and harangued the audience until the audience threw things at them was priceless, and reminded me of some of the less succesful earlier episodes in my own career.

*  Jon Downes, the Editor of all these ventures (and several others) is an old hippy of 53 who - together with his orange cat (who is currently on sick leave in Staffordshire) and two very small kittens (one of whom is also orange) puts it all together from a converted potato shed in a tumbledown cottage deep in rural Devon which he shares with various fish, and sometimes a small Indian frog. He is ably assisted by his lovely wife Corinna, his bulldog/boxer Prudence, his elderly mother-in-law, and a motley collection of social malcontents. Plus.. did we mention the orange cat?
Posted by Jon Downes at 12:33 PM No comments:

American researchers believe a high-tech airship created by a company located in the Alberta hamlet of Lac La Biche could solve the mystery of the sasquatch once and for all.
Utah-based bigfoot researcher William Barnes is trying to raise $300,000 to buy a helium-filled airship that would quietly float over dense North American forests and use thermal-imaging equipment to film footage of the legendary – not to mention elusive – creature.
An official fundraising drive for the venture, which has been dubbed The Falcon Project, kicked off last Saturday in Oregon with an all-day symposium.

After a personal encounter with bigfoot in 1997 and more than a decade spent researching sasquatch researchers, the project’s founder came up with the idea to use unmanned aerial surveillance to record the fast-moving nocturnal primate.
“We don’t want to bother them, we just want to study them,” Barnes said.
That’s where Stephen Barkley, the president of Remote Aerial Tripod Specialists Inc. (RATS), fits in.
Posted by Jon Downes at 12:27 PM No comments:

CRYPTOLINK: After more than 40 years Bigfoot is still a topic in S.W. Clark County

This old advertisement from the Gurdon Times says it all. Everything old is new again in the Southwestern part of Clark County. Bigfoot Field Research Organization's Regional Investigator Tal Branco, the Arkadelphia Siftings Herald Head Reporter Joe Phelps and The Gurdon Times Reporter Sherry Kelley have done some preliminary...

On this day in 1938 the world speed record for a steam locomotive was set at 203 Kilometres per hour by the British Mallard.
And now the news:


Peter Griffin's one man production of Starlight Express:
http://www.youtube.com/watch?v=KgMOZR_oKzg
Posted by Jon Downes at 11:33 AM No comments: