We received this news story yesterday, and didn't know whether we should laugh or cry at the gloriously inept piece of decision-making by educationalists who, for reasons known only to themselves, decided to mix up their mathematics and social studies programmes. 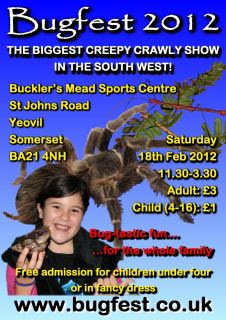 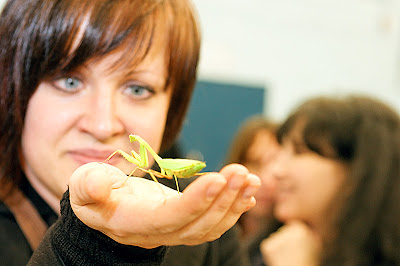 The new year sees preparations for Bugfest 2012 firmly underway. Bugfest is Yeovil’s own creepy crawly show and has gone from strength to strength from humble beginnings in a church hall in 2008. Last year’s event saw an impressive 860 visitors attending where activities ranged from arts and crafts and face painting for the little ones, to impressive stands displaying invertebrates and reptiles, and interactive informational stands. With stalls on sale now from as little as £10, this event is a great way to network, share information and sell.

Bugfest are already taking bookings from independent and established traders and are very keen to welcome small hobbyists to sell and display their livestock. Volunteers are also once again required and in return, you get free entry to the event. All booking details are on the website www.bugfest.co.uk, by emailing nick@bugfest.co.uk or calling Nick on 01935 433185.
Posted by Jon Downes at 2:23 PM No comments:

Email ThisBlogThis!Share to TwitterShare to FacebookShare to Pinterest
Labels: bugfest 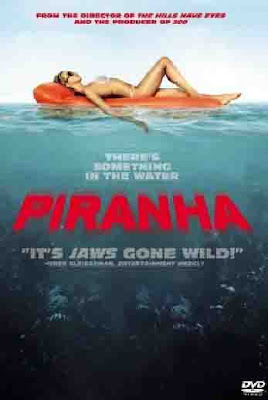 The plot (if you can call it that!) is a simple and straightforward one. After a minor earthquake opens up an underwater cave on Lake Victoria, scientists dive down to explore this new cavern. But when they are attacked by a pack of piranha (finally being released from the cave) the local sheriff has no option but to shut down the lake. However, it is also American Spring Break with thousands of college students all looking for fun on and in the water.

Right from the start you can tell this is not going to be a cinematic great but rather a tongue-in-cheek homage to monster and B-movies of the 70s and 80s. Any attempt at seriousness is left well and truly alone with the main aim being to create a fun film. This is done brilliantly and you can’t help but smile when you see the little in-jokes and references that come up on screen. The film starts out well and introduces you to all the main characters, back stories and plot quickly so it can get on and show you as much piranha-induced gore as possible in 88 fairly fast-paced minutes. The acting is decent (given that the only emotions needed are scared, terrified and dead) and when the film gets going the action scenes are gory with a touch of humour added to lighten the mood. The special effects are pretty good throughout (all relying on CGI) and the plot does its best to keep you entertained. Having seen this only in good old-fashioned two dimensions, I cannot comment on the 3D; however, I have heard that some of the scenes do (try to) jump out at you. My one criticism is that any tension that could be used is forsaken for humour and over-the-top gore. This is a shame as there are some moments when, had things been done differently, this would have been a tense and decent horror film.

At a time when monster movies seem to be about trying to scare or disgust you with gore, Piranha 3D goes down a different route and tries to provide a modern day equivalent of the old-style monster films from the 70s and 80s; and I think that it has done just that. It is definitely not a contender for best film but it is lighthearted and fun. If you are looking for a true horror film you will be disappointed. However, if you take it as it is meant you will get a fairly entertaining way to spend an hour and a half.

On this day in 1970 Biafra capitulated to Nigeria ending the Nigerian civil war (all right; not a very Fortean anniversary today but it’ll make sense when you watch today’s sign-off vid).

SIMON REAMES:Life next to a volcanic vent

Life next to a volcanic vent:

DALE DRINNON: More from the world of 'Cedar and Willow'

The link to the posting below got lost in the shuffle. Not really a problem because today's link is a sort of a sequel:
http://cedar-and-willow.blogspot.com/2012/01/not-power-girl-but-wonder-gran.html
Posted by Jon Downes at 9:00 AM No comments: