ONE OF THE NICEST BLOGS I HAVE SEEN IN AGES

I plan to regularly update this blog with practical details of how I created a mini “wildlife garden” on my tiny balcony, together with regular photos of the wildlife I’ve attracted so far.
I hope it inspires readers to think about how all of us can take practical steps to encourage and support our urban wildlife, and to see how easy it is to bring our fascinating “natural world “to the bleakest window box or inner-city balcony.

JON'S JOURNAL: We shall pick up an existence by its frogs

As regular readers of my rambling will know, I have been following the progress of the poor unfortunate froggies of two areas just outside the village - Kennerland and Huddisford. Lots of them jollily tripped out to procreate at the end of January, and all the resultant spawn was killed in the bitterly cold snap a few weeks ago and is now rotting away.

The resultant yucky mess (to use the official scientific terminology) is now rotting away and in some cases appears to acually be fouling the water of the little ponds and ditches where it was deposited by Mr and Mrs Frog the other week.

Now Mr and Mrs Frog seem to have got in the romantic mood again (or at least one couple have - perhaps because it was Valentine's Day last week), because there is one lone batch of frogspawn in the Huddisford ditch. Ironically (if this is the word) it has been laid next to a piece of decaying dead spawn.

It seems to be developing normally, which is good news. However, could the decline in the frog population be due to the fact that so many of them pursue their biological urges too early in the year for the spawn to hatch?

Isn't it a pity that it seems to be illegal now to collect spawn from the wild; because it might be a boost to the population as a whole if someone collected some of the January spawn (which is doomed anyway), raised it in captivity and released the resulting tadpoles when the cold weather is over?

What a pity there aren't any anarchist zoologists about who have a healthy disregard for the law and want to do something good for the environment. Hmmmm 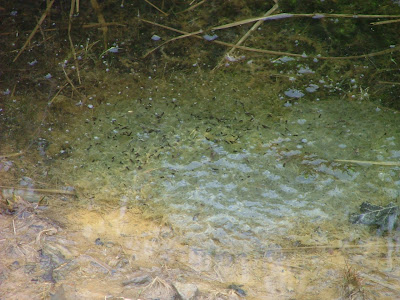 IS THIS THE BEST PHOTOGRAPH OF BIGFOOT EVER?

A blogger by the name of Melissa Hovy has been maintaining a Bigfoot blog for quite some time now. It wasn’t until recently that the Sasquatch community caught wind that Melissa could be holding the ultimate photo of all ultimate photos depicting the big guy.

The story goes than four years ago Melissa was contacted by someone who claimed to have a clear picture of Bigfoot on a trailcam. The witness sent Mellisa the picture but wouldn’t allow her to publish it…until now, that is.

Here is the photo along with commentary from Melissa herself:

In early 2008 I was contacted via email by a person claiming to have photographed a Bigfoot. The photo is posted above.

The American Bigfoot Society holds the copyright for this image for any and all purposes. As stated in the last article, if and when the true owner of this photo steps up, we will turn the copyright over to them, and they can cover this.

Frank Tunbridge is one of the good guys. He talks sense, and his research is - as far as we can tell - carried out on straight and logical lines. We wish him all the best in the world. And here he is again, accompanied by another good guy, Rick Minter...

And now another outing for the other main big cat stories of recent days, the Carlisle one that so attracted Jan Edwards' oppropbrium yesterday.

I don't think this is claws for concern
Posted by Jon Downes at 7:27 PM No comments:

The saga of The Beast of Smallthorne refuses to quietly go away. Nick Redfern writes: 'I'm very glad to see the majestic New Street Station got a mention. May we please see the cat at the foot of the Rotunda?'

Well, of course the CFZ, being the world's largest mystery animal research group, has nothing better to do than to indulge the stupid whims of ex-patriate Brummies with no hair.

Perhaps you would like to see 'The Beast of Smallthorne' in some other well known West Midlands landmarks. How about in an industrial estate in Dudley, or outside B&Q in Wolverhampton... 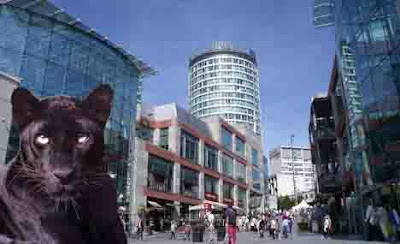 On this day in 1943 George Harrison was born.
And now the news:

New on the Frontiers of Anthropology, a questioning of the ethics regarding the elimination of a candidate
"Pre-Clovis" culture:

New on Frontiers of Zoology, a continuing series of articles on Giant Bats, this time focusing on the Oriental ones:

And New on Cedar and Willow a Yahoo News Item about an "Elvis Girl" who became a Nun (One of the candidates for a Nylon Commando, no less):

http://cedar-and-willow.blogspot.com/2012/02/delores-hart-on-yahoo-news.html
Posted by Jon Downes at 12:32 PM No comments:

IT IS ALWAYS GRATIFYING WHEN PEOPLE SAY NICE THINGS ABOUT YOU...

Is the 'Texas Blue Dog' a Chupacabra? (Photo)
Gather.com
A stuffed and mounted dog with blue skin and eyes may revive the legend of the Chupacabra in the Southwest after the myth was largely debunked last year as merely coyotes with a severe case of mange. But an extremely scholarly, investigative report by ...
Posted by Jon Downes at 12:08 AM No comments: