It will probably come as no surprise to anyone to hear that, because Richard had to pull out of the Tasmania expedition at the last minute, Lars Thomas will be delivering the Saturday night expedition report.

Richard will be giving his talk on dragons that he did to twelve people at the first Weird Weekend in Exwick village hall fifteen years ago...

I suspect that him, me, Graham and Nichola are the only people who will be at this year's event who were still there then.
Posted by Jon Downes at 2:41 PM 1 comment:

Syd Henley phoned me late last night
Complaining about our website
He said the new design just stinks
Cos he couldn't find any links,
And I realised I'd have to think
because there was no front page link
to the back postings from all the blogs
about expeditions, cryptids and CFZ dogs
but that has now been rectified,
I'm sorry Syd (at least I tried)
And of you look at the graphic below
it will tell you where to go.
Syd also sounded quite irated
that the Weird Weekend site's not updated
so the details can all be seen
about the event for 2015
more apologies from this humble freak
it probably will be done next week... 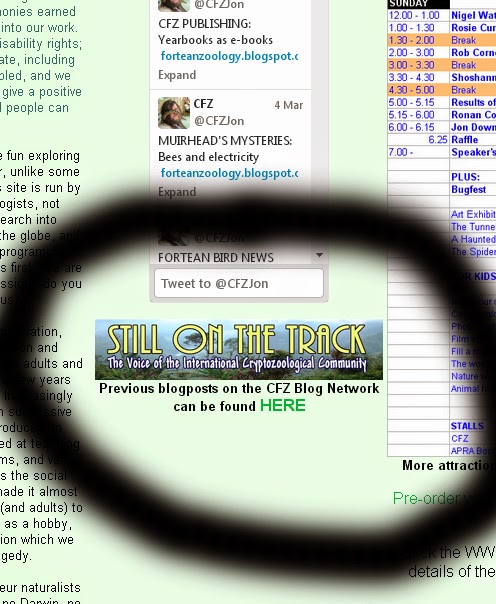 'Mountain Monsters': The AIMS Team Comes Across a Huge Bigfoot Nest and It's Terrifying
Yahoo
The AIMS team is on the hunt for the Kentucky Bigfoot, the Midnight Whistler. During their first night investigation, the team comes across the monster's

Ex-murder detective to shine light on mysteries in South Shields
Shields Gazette
He aims to uncover the real truth behind things like psychics, the Bermuda Triangle, the Lost City of Atlantis, UFOs, Bigfoot, mermaids and allegations ...

Bigfoot Disturbingly Photobombs Australians
WakeUpTheMasses.com
Either bigfoot, the yowie, a monster, ghost, or some sort of extremely disturbing humanoid being is captured on camera sixty years ago.Ever taken a

Watch out for Bigfoot: researcher in a gorilla suit studies reactions.
The Saint
A man had been dressing up in a big foot costume in order to see how people would react, as part of a scientific study
Posted by Jon Downes at 12:57 PM No comments:

www.gonzomultimedia.co.uk/about.html
The full moon kicked in a little early this month, and I was hors de combat for most of yesterday. Today, working my way through the entire canon of work by Daniel Johnston, and trying to put together a Frank Zappa special for the weekend, seems a little better. Yesterday evening the Riders came round. Nor the Four Horsemen, but Steve and Andy P. A jolly time was had by all. Later last night the tortoises (Testudo graeca) were getting amorous, and it was the first time I have ever seen the mating ritual of this species as described by Gerald Durrell in 'My Family and Other Animals'. My jokes about "50 Shades of Graeca" were sadly unappreciated by my wife and mother in law.
THOM THE WORLD POET: The Daily Poem
http://gonzo-multimedia.blogspot.com/2015/03/thom-world-poet-daily-poem_5.html
Rig Rundown - Yes' Chris Squire & Steve Howe
http://gonzo-multimedia.blogspot.co.uk/2015/03/rig-rundown-yes-chris-squire-steve-howe.html
THE GONZO TRACK OF THE DAY: The Future [Homeostasis]
http://gonzo-multimedia.blogspot.co.uk/2015/03/the-gonzo-track-of-day-future.html
Jack Bruce - The Man Behind the Bass (BBC Documentary)
http://gonzo-multimedia.blogspot.co.uk/2015/03/jack-bruce-man-behind-bass-bbc.html
Special Fairport Convention and Sandy Denny evening
http://gonzo-multimedia.blogspot.co.uk/2015/03/special-fairport-convention-and-sandy.html
The Gonzo Weekly #119
www.gonzoweekly.com
Eliza Carthy, Arthur Brown, Simon Phillips, Daevid Allen, Gilli Smyth, Jon Anderson, Hawkwind and Yes fans had better look out!
The latest issue of Gonzo Weekly (#119) is available to read at www.gonzoweekly.com, and to download at http://www.gonzoweekly.com/pdf/. It has Eliza Carthy on the front cover with an interview with her inside. Doug Harr reports on legendary drummer Simon Phillips, and we send Liz Lenten to a Desert Island. Neil Nixon reports on singing drug addicts, Wyrd goes acoustic and Xtul gets freakier than ever. Jon does some reporting from the field, and there are radio shows from Strange Fruit and from M Destiny at Friday Night Progressive, and the titular submarine dwellers are still lost at sea, although I have been assured that they will hit land again soon. There is also a collection of more news, reviews, views, interviews and pademelons trying to choose (OK, nothing to do with small marsupials having difficulty in making choices, but I got carried away with things that rhymed with OOOOS) than you can shake a stick at. And the best part is IT's ABSOLUTELY FREE!!!
This issue features: Wilko Johnson, Noel Gallagher, Paloma Faith, Bjork, Radiohead, Massive Attack, Arthur Brown, Daevid Allen, Gilli Smyth, Bob Marley, Karnataka, Strange Fruit, Friday Night
Progressive,Leonard Nimoy, Warsaw Pakt, Hugh Hopper, Orlando Monday Allen, Dee Palmer, Badfinger, Ant-Bee, Billy Cobham, Tony Palmer, Homeostasis, Nolan Porter, Galahad, Mick Abrahams Band, Eliza Carthy, Jim Moray, Protocol, Liz Lenten, Hawkwind, Yes, Jon Anderson, Steve Howe, Tony Kaye, Alan White, Joey Molland, Robben Ford, George Harrison, Xtul, Elvis, Justin Bieber, Marillion, Metallica,
Beatles, Spurious Transients, The Relationships, Rocket Scientists, The Brits, Chasing Violets, Pest, Eliwagar
Read the previous few issues of Gonzo Weekly:
Issue 118 (Daevid Allen cover)
http://www.flipsnack.com/9FE5CEE9E8C/gonzo118.html
Issue 117 (Daevid Allen cover)
http://www.flipsnack.com/9FE5CEE9E8C/gonzo117.html
Issue 116 (Empire cover)
http://www.flipsnack.com/9FE5CEE9E8C/gonzo116.html
Issue 115 (Edgar Froese cover)
http://www.flipsnack.com/9FE5CEE9E8C/gonzo115.html
Issue 114 (Barbara Dickson cover)
http://www.flipsnack.com/9FE5CEE9E8C/gonzo114.html
Issue 113 (Rick Wakeman cover)
http://www.flipsnack.com/9FE5CEE9E8C/gonzo113.html
Issue 112 (Rocket Scientists cover)
http://gonzo-multimedia.blogspot.com/2015/01/gonzo-weekly-112.html

* The Gonzo Daily is a two way process. If you have any news or want to write for us, please contact me at jon@eclipse.co.uk. If you are an artist and want to showcase your work, or even just say hello please write to me at gonzo@cfz.org.uk. Please copy, paste and spread the word about this magazine as widely as possible. We need people to read us in order to grow, and as soon as it is viable we shall be invading more traditional magaziney areas. Join in the fun, spread the word, and maybe if we all chant loud enough we CAN stop it raining. See you tomorrow...
* The Gonzo Daily is - as the name implies - a daily online magazine (mostly) about artists connected to the Gonzo Multimedia group of companies. But it also has other stuff as and when the editor feels like it. The same team also do a weekly newsletter called - imaginatively - The Gonzo Weekly. Find out about it at this link: www.gonzo-multimedia.blogspot.com/…/all-gonzo-news-wots-fit…
* We should probably mention here, that some of our posts are links to things we have found on the internet that we think are of interest. We are not responsible for spelling or factual errors in other people's websites. Honest guv!
* Jon Downes, the Editor of all these ventures (and several others) is an old hippy of 55 who - together with an infantile orange cat named after a song by Frank Zappa puts it all together from a converted potato shed in a tumbledown cottage deep in rural Devon which he shares with various fish, and sometimes a small Indian frog. He is ably assisted by his lovely wife Corinna, his bulldog/boxer Prudence, his elderly mother-in-law, and a motley collection of social malcontents. Plus.. did we mention the infantile orange cat?
Posted by Jon Downes at 12:25 PM No comments:

ON THIS DAY IN 1623 - The first alcohol temperance law in the colonies was enacted in Virginia.
And now some more recent news from the CFZ Newsdesk


AND TO WHISTLE WHILE YOU WORK... (Music that may have some relevance to items also on this page, or may just reflect my mood on the day)
Posted by Jon Downes at 2:30 AM No comments: