POLITICS: beliefs in aliens and other conspiracies

Interestingly, it seems that close to 60% of GOP voters believe global warming is a hoax compared to 23% of Democrats.

And as for Bigfoot and those shape-shifters?

NATURAL WORLD: Grasshopper is a shadow of his future self?

A bright green grasshopper emerges from its old skin, leaving a perfect replica of itself behind. 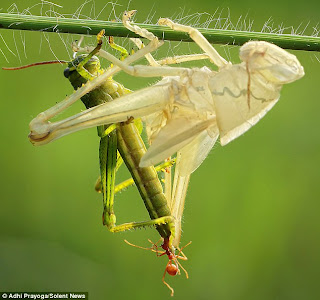 Photographer Adhi Prayoga, 41, watched the transformation in his back garden in Indonesia and caught the moment on camera when a grasshopper shed its old skin, leaving behind a perfect replica of itself.

THE GONZO BLOG DOO DAH MAN IS ON AN ANABASIS

Graham here, with today's updates. I've more or less recovered from seeing Hawkwind play in Seaton the other night, and the post-gig hissing in my ears has almost gone. I won't be seeing 'em again til August, now.

Jon and Corinna are still away, currently traversing the English midlands this sunny but rather cold Wednesday lunchtime, so I've looked "anabasis" up in the dictionary and then completed the Gonzo updates.

A sneak peek at Mimi Page's guest appearance on this Friday’s episode of Ghost Adventures.
http://gonzo-multimedia.blogspot.co.uk/2013/04/mimi-page-writes.html

Korean haircuts and rockets from Thom the World Poet
http://gonzo-multimedia.blogspot.co.uk/2013/04/thom-world-poet-daily-poem_3.html

Today's Gonzo Track of the Day is from Gong - "Oily Way"
http://gonzo-multimedia.blogspot.co.uk/2013/04/gonzo-track-of-day-gongs-oily-way.html

*  Jon Downes, the Editor of all these ventures (and several others) is an old hippy of 53 who - together with his orange cat (who is currently on sick leave in Staffordshire) and a not very small orange kitten (who isn't) puts it all together from a converted potato shed in a tumbledown cottage deep in rural Devon which he shares with various fish, and sometimes a small Indian frog. He is ably assisted by his lovely wife Corinna, his bulldog/boxer Prudence, his elderly mother-in-law, and a motley collection of social malcontents. Plus.. did we mention the orange cats?
Posted by Jon Downes at 1:03 PM No comments:

On this day in 1924 Peter Hawkins was born. Hawkins was an actor best known for his fantastic voice over work and has a vast list of credits including the Daleks and Cybermen from Doctor Who, Bill and Ben the Flowerpot Men, Penfold from Danger Mouse, Zippy from Rainbow, Big Ears in Noddy, the Narrators in Superted and Jimbo and the Jet Set, and provided ALL the voices for the Adventures of Tintin, the Family Ness and Captain Pugwash.

He also spawned Silas Hawkins who inherited his father's acting talent and has appeared at many CFZ Weird Weekends bringing a diverse range of characters back to life including Charles Fort and most famously P.T. Barnum.

Some of Peter Hawkins' work: