I have recently been doing a bit of research into the Peak District (morespecifically The Roaches) wallabies, which escaped from a private zoo in1939/40 along with other species of animals, such as yaks.I have seen a web site - www.roaches.org.uk/memories5.html 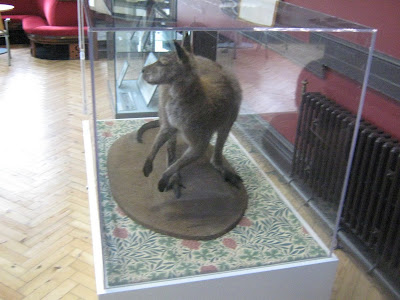 which claims that a Mrs Pickford saw a wallaby in August 2011 in this area.
The Evening Sentinel, a Leek newspaper
ek newspaper dated June 23rd 1972 says:

"WALLABY MAY GO ON BRI
TI
abies from a private collection belonging to Sir Philip Brocklehurst, land-owner and former explorer, of Swythamley Hall,near Leek, may lead to this species being recognised as a British mammal.SH LIST"
The roamings of some of the wall
It is believed that during the war years a number of wallabies escaped from Sir Philip`s land between Leek and Buxton which includes the Roaches, and settled in the Peak District where a large colony has subsequently developed...

[The population reached a maximum size of about 60 in 1975 according to Wikipedia.-R]

...It has been their survival there over the last 30 years during which there have been several severe winters which inspired research by zoologists who are expected to advance the theory that wallabies can now also be recog 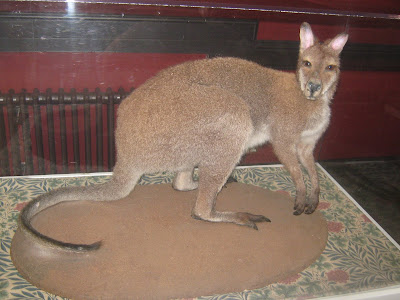 nised as British. The reaction of Sir Phillip now 85, was mainly concerned with the welfare of the animals. He told The Sentinel:
"The wallabies in the peak district are certainly descendants of those belonging to me. It is all right so long as people leave them alone. Some members of the public try to chase them." Despite the number which left the Leek area wallabies - which are between 2 foot 6 ins and 3 foot in height are still seen on the more remote parts of Sir Philip`s land."(1) 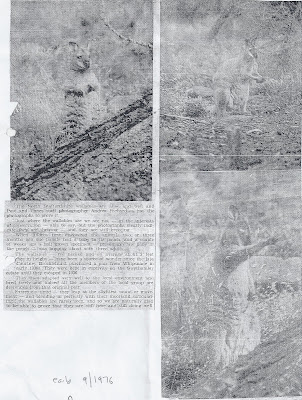 In early Sept 1976 the Leek Post and Times published the following along with 3 accompanying photos:

When Andrea first discovered the animals two or three months ago one female had a baby in its pouch, and a couple of weeks ago a half grown specimen - presumably the baby in the pouch - was hopping about with three adults. The wallabies - red necked and on average about 3 feet in height - have been a source of wonder since the late Courtenay Brocklehurst purchased a pair from Whipsnade in the early 1930s. They were kept in captivity on the Swythamley estate until they escaped in 1936 [N.B. This contradicts other opinions, see above that say they escaped in 1939/40-R]

They then adapted very well to the local environment and bred freely and indeed all the members of the local group are descended from that original pair. Extremely timid - they leap at the slightest sound or movement - and blending in perfectly with their moorland surroundings , the wallabies are rarely seen, and so we are naturally glad to be able to prove that they are
still here and still doing well. (2)

In July 2012 I took 2 colour photos of "Wally", a wallaby stuffed and contained within a glass case in Leek Local Studies Library. He was found dead on December 19th 1993 by Mr Graham Ives of Gradbach as he walked through Lud`s Church,which isn`t a church but a rocky outcrop. It was stuffed by a professional taxidermist for £580. In Feb 2012 "Wally" re-appeared at the National Trust Education Centre at Illam who donated it to the Leek Library.
“A friend of mine,Darren, as a child in about 1979 saw an albino wallaby at a rocky outcrop, called `Lud`s Church` in the Peak District. I have a vague memory of seeing a letter in the BBC Wildlife magazine several years ago mentioning albino wallabies there in the 1950s. Inbreeding?

It is another one of those greyish days which doesn't seem able to make its mind up whether it is going to rain or shine. Graham has gone into Bideford and I am hoping to have one of my gaggle of adopted nieces in the office for the afternoon, which will not only brighten up my day, but will make things easier..

A new biography of Motorhead apparently gives lotsa information (some of it unpublished) about Lemmy's tenure in Hawkwind. I am looking forward to reading it, so I must do myt best to blag a copy.
http://gonzo-multimedia.blogspot.com/2012/08/link-motorhead-biography.html

Trevor Rabin is one of the most unjustly overlooked Yes alumni. Not only did he make an unforgettable contribution to the band itself, but he has had a long, varied and interesting solo career. Herewith an interview.
http://gonzo-multimedia.blogspot.com/2012/08/link-interview-with-trevor-rabin.html

I'm not sure how Rick Wakeman, who is a devout Christian feels about being described as a 'God'. In fact I don't know how I (who am also a Christian, albeit of a rather Zen type) feel about describing Rick as a 'God' despite the fact that he plays keyboards like an angel (oh dear this is getting confusing...)
http://gonzo-multimedia.blogspot.com/2012/08/rick-wakeman-deified.html

For those of us males of a certain age the vision of a 6 foot tall naked Valkyrie dancing on stage with Hawkwind, is one of the defining images of our smutty adolescence. But what happened to Stacia after she put her clothes back on and left the band?
http://gonzo-multimedia.blogspot.com/2012/08/hawkwind-whatever-happened-to-stacia.html

A couple of days ago Michael Des Barres was back on the Andy Dick show. Here is a backstage picture to prove it. Golly, I hope that there is video...
http://gonzo-multimedia.blogspot.com/2012/08/i-told-you-that-michael-was-back-on-any.html

And finally, its our daily visit to the Universe of Thom the World Poet.
http://gonzo-multimedia.blogspot.com/2012/08/thom-world-poet-daily-poem_30.html

The Gonzo Daily is a two way process. If you have any news or want to write for us, please contact me at jon@eclipse.co.uk. If you are an artist and want to showcase your work, or even just say hello please write to me at gonzo@cfz.org.uk. Please copy, paste and spread the word about this magazine as widely as possible. We need people to read us in order to grow, and as soon as it is viable we shall be invading more traditional magaziney areas. Join in the fun, spread the word, and maybe if we all chant loud enough we CAN stop it raining. See you tomorrow

Posted by Jon Downes at 2:38 PM No comments:

On this day in 1797 Mary Shelley, the author of Frankenstein, was born.

An early silent film of Frankenstein:

Posted by Jon Downes at 9:46 AM No comments:

I consulted with Tracey Dixon about the latest mystery bug, or bugs in this case, and we agree that they are probably nymphs of some species of true bug (maybe an assassin or wheel bug) and the "dung" most likely the eggs from which they hatched.

We also agree that they are cute.

There just isn't enough detail to go further than that. Also, in the future, it would be easier if people included a little information about where the mystery bug's picture is taken.

Thoreau’s journal entry of June 14, 1857 describes a Sea Monster sighting off of the coast of Duxbury, Massachusetts By Daniel Webster and his boatman Seth Peterson. Having some of Daniel Webster’s property in my family I feel a connection to Daniel Webster and some of his close friends, My dad bought Webster’s Boathouse from the Peterson family. They were descendants of Daniel Webster’s original boatman and lived across the street from my uncle Charlie, who used to joke about fixing up my 90-year-old grandmother with the elder Peterson with the nickname Vinegar. My grandmother would laugh and tell him to shut up. Along with the boathouse came the lobster traps and buoys which Dad and I fished with the old Peterson colors black and yellow...
Read on...