THE JOURNAL OF CRYPTOZOOLOGY #3 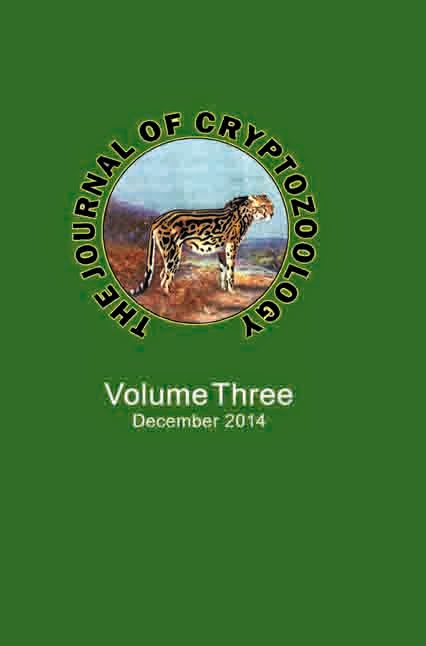 For years people have been complaining that since the demise of the ISC there has been no peer-reviewed cryptozoological journal. So, three or four years ago I decided that we ought to start one, so I approached Dr Karl Shuker with the idea and the rest is history.

As regular readers of my daily ramblings will know, Volume Three of the Journal of Cryptozoology came out earlier this week. They have sold out on Amazon already and will be having more copies in soon.

However, if you want to buy it direct from us, you can get it at a special discounted price of £5.99 plus a quid's postage direct from www.journalofcryptozoology.com. C'mon guys, dig deep.

New Footage Is This Either A Bigfoot Or A Human? (Video)

Before It's News
While investigating an area, Scott Carpenter captures footage of something that he can only describe as either bigfoot or a man. “On April 12th, 2015 ...
Posted by Jon Downes at 1:41 PM No comments:

www.gonzomultimedia.co.uk/about.html
I felt terrible when I woke up about two hours later than I should have done, but two large breakfasts and a healthy dose of the Sleaford Mods later, I am feeling far better than I have any right to do, and am actually rather enjoying today.
For years people have been complaining that since the demise of the ISC there has been no peer-reviewed cryptozoological journal. So, three or four years ago I decided that we ought to start one, so I approached Dr Karl Shuker with the idea and the rest is history. As regular readers of my daily ramblings will know, Volume Three of the Journal of Cryptozoology came out earlier this week. They have sold out on Amazon already and will be having more copies in soon. However, if you want to buy it direct from us, you can get it at a special discounted price of £5.99 plus a quid's postage direct from www.journalofcryptozoology.com. C'mon guys, dig deep.
THE GONZO TRACK OF THE DAY: Strawberry Alarm Clock
http://gonzo-multimedia.blogspot.co.uk/2015/04/the-gonzo-track-of-day-strawberry-alarm.html
THOM THE WORLD POET: The Daily Poem
http://gonzo-multimedia.blogspot.co.uk/2015/04/thom-world-poet-daily-poem_23.html
Yes guitarist Steve Howe talks about his love affair with the guitar
http://gonzo-multimedia.blogspot.co.uk/2015/04/yes-guitarist-steve-howe-talks-about.html
45 Years Ago: Stephen Stills Hits a Parked Car
http://gonzo-multimedia.blogspot.co.uk/2015/04/45-years-ago-stephen-stills-hits-parked.html
Michael Des Barres releases ‘Key to the Universe’ as a love letter to rock
http://gonzo-multimedia.blogspot.co.uk/2015/04/michael-des-barres-releases-key-to.html
The Gonzo Weekly #126
www.gonzoweekly.com
Atkins-May Project, Judas Priest, Judge Smith, Peter Hammill, Van der Graff Generator, Edgar Allan Poe, 4th Eden, Phil Collins, Genesis, Monika, Hawkwind, Jon Anderson, and Yes fans had better look out!
The latest issue of Gonzo Weekly (#126) is available to read at www.gonzoweekly.com, and to download at http://www.gonzoweekly.com/pdf/. It has The Atkins-May Project  on the cover, and inside yours truly interviews Paul May about the new Anthology project. Doug writes about Phil Collins, Jon eulogises over Monika, and Michael Des Barres' new album, and interviews 4th Eden, and the director of a new staging of Peter Hammill and Judge Smith's classic opera 'The Fall of the House of Usher'. Jon critiques a book about 4Chan. Neil Nixon reports on an even stranger album than usual, Wyrd goes avant garde, Xtul gets even more peculiar, and there are radio shows from Strange Fruit and from M Destiny at Friday Night Progressive, and the titular submarine dwellers are still lost at sea, although I have been assured that they will hit land again soon. There is also a collection of more news, reviews, views, interviews and pademelons trying to choose (OK, nothing to do with small marsupials having difficulty in making choices, but I got carried away with things that rhymed with OOOOS) than you can shake a stick at. And the best part is IT's ABSOLUTELY FREE!!!
This issue features:
Black Sabbath, The Polyphonic Spree, Bill Wyman, Abbey Road Studios, Paul McCartney, The Who, Percy Sledge, Ronnie Carroll, Gunter Grass, John Shuttleworth, Hugh Hopper, Rocket Scientists, Tommy James, Birmingham Sunday, Inner City Unit, Mick Abrahams, OneRepublic, Ellie Goulding, Florence and the Machine, Brantley Gilbert,Paul May, Al Atkins, Phil Collins, Colin Watkeys, Peter Hammill, Judge Smith, Hawkwind, Richard Freeman, Steve Hackett, Toto, Yes, Chris Squire, Rick Wakeman, Jon Anderson, 4th Eden, Xtul, The Beatles, Ozzy, Michael Jackson, Elvis, Kate Bush, Muddy Waters, NSync, Michael des Barres, Monika, America, Furor Gallico
Read the previous few issues of Gonzo Weekly:
Issue 124 (Karnataka cover)
http://www.flipsnack.com/9FE5CEE9E8C/gonzo123.html
Issue 123 (Cream cover)
http://www.flipsnack.com/9FE5CEE9E8C/gonzo123.html
Issue 122 (Anthony Phillips cover)
http://www.flipsnack.com/9FE5CEE9E8C/gonzo122.html
Issue 121 (Annie Haslam cover)
http://www.flipsnack.com/9FE5CEE9E8C/gonzo121.html
Issue 120 (Frank Zappa cover)
http://www.flipsnack.com/9FE5CEE9E8C/gonzo120.html
Issue 119 (Eliza Carthy cover)
http://www.flipsnack.com/9FE5CEE9E8C/gonzo119.html
Issue 118 (Dave Brock cover)
http://www.flipsnack.com/9FE5CEE9E8C/gonzo118.html
Issue 117 (Daevid Allen cover)
http://www.flipsnack.com/9FE5CEE9E8C/gonzo117.html
All issues from #70 can be downloaded at www.gonzoweekly.com if you prefer. If you have problems downloading, just email me and I will add you to the Gonzo Weekly dropbox. The first 69 issues are archived there as well. Information is power chaps, we have to share it!
You can download the magazine in pdf form HERE:
http://www.gonzoweekly.com/pdf/


* Jon Downes, the Editor of all these ventures (and several others) is an old hippy of 55 who - together with an infantile orange cat named after a song by Frank Zappa puts it all together from a converted potato shed in a tumbledown cottage deep in rural Devon which he shares with various fish, and sometimes a small Indian frog. He is ably assisted by his lovely wife Corinna, his bulldog/boxer Prudence, his elderly mother-in-law, and a motley collection of social malcontents. Plus.. did we mention the infantile orange cat?
Posted by Jon Downes at 12:35 PM No comments:

ON THIS DAY IN 1348 - The first English order of knighthood was founded. It was the Order of the Garter.
And now some more recent news from the CFZ Newsdesk


AND TO WHISTLE WHILE YOU WORK... (Music that may have some relevance to items also on this page, or may just reflect my mood on the day)
Posted by Jon Downes at 1:35 AM No comments: