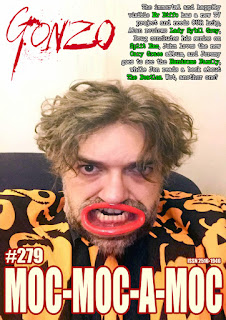 Gonzo Weekly #279
THE DIGI-ME-DO ISSUE
http://www.gonzoweekly.com/
In this magnificently peculiar issue, The immortal and happily visible Mr Biffo has a new TV project and needs OUR help, Alan reviews Lady Sybil Grey, Doug concludes his series on Split Enz, John loves the new Cary Grace album, and Jeremy goes to see the Handsome Family, while Jon reads a book about The Beatles. Wot, another one?
#Hail Eris!
And there are radio shows from Strange Fruit, AND Mack Maloney, AND Friday Night Progressive, there are columns from all sorts of folk including Neil Nixon, Kev Rowlands, Roy Weard, C J Stone, and Mr Biffo AND the irrepressible Corinna. There is also a collection of more news, reviews, views, interviews and southern dibblers who have gone for a snooze (OK, nothing to do with small marsupials who have probably got hangovers and have decided to have a little rest, but I got carried away with things that rhymed with OOOOS) than you can shake a stick at. And the best part is IT'S ABSOLUTELY FREE!!!

* The Gonzo Daily is a two-way process. If you have any news or want to write for us, please contact me at jon@eclipse.co.uk. If you are an artist and want to showcase your work, or even just say hello please write to me at gonzo@cfz.org.uk. Please copy, paste and spread the word about this magazine as widely as possible. We need people to read us in order to grow, and as soon as it is viable we shall be invading more traditional magaziney areas. Join in the fun, spread the word, and maybe if we all chant loud enough we CAN stop it raining. See you tomorrow...


* Jon Downes, the Editor of all these ventures (and several others) is an old hippy of 58 who - together with a Jack Russell called Archie, an infantile orange cat named after a song by Frank Zappa, and two half-grown kittens, one totally coincidentally named after one of the Manson Family, purely because she squeaks, puts it all together from a converted potato shed in a tumbledown cottage deep in rural Devon which he shares with various fish. He is ably assisted by his lovely wife Corinna, his bulldog/boxer Prudence, his elderly mother-in-law, and a motley collection of social malcontents. Plus.. did we mention Archie and the Cats?
Posted by Jon Downes at 6:24 PM No comments:

Posted by Liv McCarthy at 3:03 PM No comments:

This is a bit late but on 4th January I dived with sharks at the Blue Planet Aquarium. It was lot's of fun and I really enjoyed it. I loved watching the sharks and the random fish that kept coming closer and closer to me. I got salt-water in my mouth, which was really disgusting.

There were reef sharks, guitar fish, unicorn fish and a puffer fish. My favourite, though, was the black-tipped reef shark.

In order to be allowed to dive I had to learn kind of sign language to be able to talk to the diving instructor whilst we were underwater. I learned signs for different kinds of creatures and also for when I needed a break from the water, or to say I was OK.

Here are some pictures from the trip: 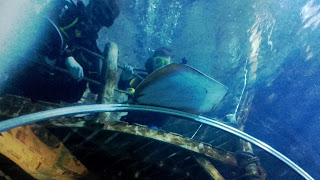 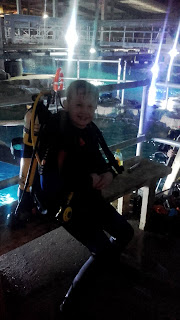 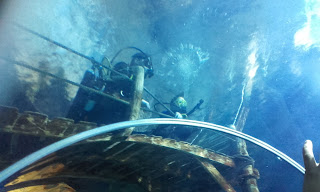 ON THIS DAY IN - 0421 - The city of Venice was founded.
And now some more recent news from the CFZ Newsdesk