New at the Frontiers of Zoology:
http://frontiersofzoology.blogspot.com/2013/11/ridge-watcher-bigfoot.html

New at Cedar and Willow:
http://cedar-and-willow.blogspot.com/2013/11/starhawk-and-starhawk-chronicles.html

www.gonzomultimedia.co.uk/about.html
Yesterday was the most unpleasant day in the Capitalist Year. Yes, boys and girls, it was Black Friday. Even though the British don't celebrate Thanksgiving, we have started to celebrate the day after, when unbridled Consumerism hits the streets. As Loren Coleman so rightly says on his blog: "...in recent years, it has become capitalism's version of "Devil's Night," chiefly associated with the serious vandalism and arson seen in Detroit, Michigan from the 1970s to the 1990s. Violence has been frequent news byproduct of reports on Black Fridays, since 2006, and the media appears to be enjoying detailing every fight, shooting, or near riots on Black Fridays". Horribly, yesterday I had emails from members of the public wanting to know whether I was going to be doing massive savings on purchases of the Journal of Cryptozoology for Black Friday. My reply was in the negative.
I am not a renunciate - I like to have money in my pocket, but none of the things I do are motivated by money, and I find a culture where (as Dave McMann said, commenting on Loren's post that people "must shop for tat they don't need or can't afford as they have been brainwashed by he media to do so" totally abhorrent. There is nothing wrong with making money, but there is everything wrong with harrassing, bullying or manipulating people so that one can do so.
The new issue of Gonzo Weekly is out, and boy is it a corker. We have an interview with the lovely Judy Dyble about her recent appearance on an EP by Thee Faction, who make the claim that they are bringing down the government one song at a time which sounds good to me, especially as I have been doing something similar. We also have an interview with John Higgs about chaos, magick, and the band who burned a million quid. Listen to it and enter the surrealchemical world of the KLF. We also have Steve Ignorant's Slice of Life's recent London show in pictures, Doug Harr reviewing the new Jethro Rull biography, Jefferson Starship, Clearlight and tons more. Add to this news, reviews, interviews, idiosyncratic opinion pieces and that little bit of politics...and its all ABSOLUTELY FREE.
Check out this issue
http://eepurl.com/JsdCX
Or make an old anarchist hippy very happy by subscribing.
http://eepurl.com/r-VTD
http://gonzo-multimedia.blogspot.com/2013/11/gonzo-weekly-magazine-54.html
*****
Another visit to our old friend Thom the World Poet
http://gonzo-multimedia.blogspot.com/2013/11/thom-world-poet-daily-poem_30.html
Today's Track of the Day is by Jack Bruce
http://gonzo-multimedia.blogspot.com/2013/11/thom-world-poet-daily-poem_30.html
Genesis revisited & extended by original guitarist!
http://gonzo-multimedia.blogspot.com/2013/11/genesis-revisited-extended-by-original.html
Roy Wood, The Apex, 9 December 2013
http://gonzo-multimedia.blogspot.com/2013/11/roy-wood-apex-9-december-2013.html
More on Hawkwind's live Space Ritual show
http://gonzo-multimedia.blogspot.com/2013/11/more-on-hawkwind-space-ritual-show.html

*  Jon Downes, the Editor of all these ventures (and several others) is an old hippy of 54 who - together with his orange cat (who is currently on sick leave in Staffordshire) and two very small kittens (one of whom is also orange) puts it all together from a converted potato shed in a tumbledown cottage deep in rural Devon which he shares with various fish, and sometimes a small Indian frog. He is ably assisted by his lovely wife Corinna, his bulldog/boxer Prudence, his elderly mother-in-law, and a motley collection of social malcontents. Plus.. did we mention the orange cat?
Posted by Jon Downes at 1:50 PM No comments: 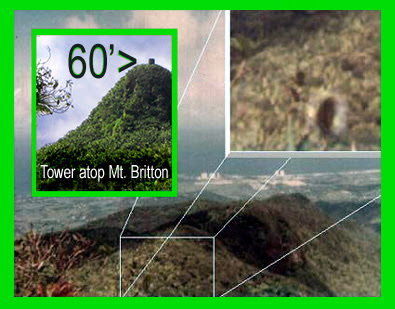 Recently at Mysterious Universe, Nick Redfern wrote about what he has learned of the oft-neglected legends of a hirsute hominid roaming the Caribbean island of Puerto Rico, which is to say not much. To be fair, there isn't much on this strange and elusive creature. Fortunately, I spent several years there talking to locals and researching the island's many tales and can give you what little more I have learned on the topic.
Comecogollos (roughly translated as one who eats the hearts of edible plants) is the term applied to the fabled bipedal primates similar to Bigfoot that are known to destroy guinea (a small, sweet type of banana) crops by devouring the top portion of the tree - hence the name.

Ironically, however, witnesses say that the creature is after the sap found in the trunk and not the guineas themselves. Witnesses have described this creature as hirsute, short, and bipedal with a quick step. It has been witnessed in areas of increased UFO activities such as the El Yunque National Rainforest.

KARL SHUKER: From King Cheetahs to Koolookambas - Volume 2 of 'The Journal of Cryptozoology' is available to pre-order

The orang pendek of Sumatra in Indonesia's Greater Sundas island group has attracted considerable cryptozoological attention, but could there also be diminutive yet previously less-publicised man-beasts existing still-undiscovered by science on Indonesia's much smaller Lesser Sundas island of Flores?

Does an ornate 16th-century painting from India's Mughal Empire hold the key to the former existence in Asia of a mystery cat analogous to Africa's king cheetah?

How can the vast diversity of reports appertaining to mysterious freshwater cryptids across the length and breadth of Spain be explained?

What is the taxonomic identity of the koolookamba, a longstanding African mystery ape known not only from reports but also from captive specimens - just an aberrant version of chimpanzee, or a taxonomically discrete form in its own right, or even a bona fide chimpanzee-gorilla hybrid?

These are the fascinating subjects and thought-provoking questions under consideration in the papers contained within Volume 2 of the Journal of Cryptozoology - the world's only peer-reviewed scientific periodical devoted to mystery animals - which is now available to pre-order here. Don't miss it!

Engravings from 1896 of Mafuca, the most famous koolookamba to have been exhibited in captivity

On this day in 1965 the comedy actor/ writer/ director Ben Stiller, of Zoolander and Night at the Museum fame, was born.


What is this?! A centre for ants?!
http://www.youtube.com/watch?v=NQ-8IuUkJJc
Posted by Jon Downes at 7:25 AM No comments: