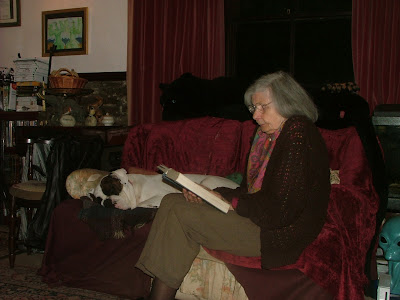 For all of you who asked about Prudence. She came home this afternoon and sulked for a bit. She is on a special diet and medication which should hopefully turn her urine acidic and dissolve the bladder stones.
She still has difficulty peeing, and I would not be surprised if she has to go back t0 the vet to be catheterised again, but on the whole the prognosis is pretty good though expensive.
This evening I photographed this cosy domestic scene; Prudence fast asleep whilst Grandmama reads Jane Austen.
I will keep you all abreast of any developments.
Posted by Jon Downes at 9:53 PM No comments:

On this day in 1985 the Nintendo Entertainment System (aka NES/Famicom) was released in Japan. The NES went on to become the world's best ever selling video games console and saved the entire industry after the great video games crash, which was mainly caused by Atari who did 'smart' things like making thousands more copies of their quite pants ET game than there were Atari 2600s to play it on.

When I was about 9, the power glove seemed so cool:

Sunday lunchtime once again
rhymes just flow out from my pen,
(and my hi-fi is turned up to ten)
and I'm sat at my keyboard once again
trying to coax our rhyming verse
(but a proper job would be much worse)
and I'll carry on writing about Gonzo stuff
till everyone involved has had enough

It has become a really fine tradition
(and this is by my own admission)
that my sunday rhymes on the music biz
include verses about Lenten (Liz)
'Cos Auburn are a damn fine band,
see (I knew you'd understand)
Here's a review of her new CD
and its a good one (believe me)
http://gonzo-multimedia.blogspot.com/2012/07/auburn-nice-review.html

Dan Wooding wrote (for goodness sake man)
a groovy book about Rick Wakeman
and I (although its not an issue)
typeset and designed Gonzo's reissue
and it is damn good news for me
that Dan Wooding's been on TV
so come on people have a look,
and watch our Dan promote the book.
http://gonzo-multimedia.blogspot.com/2012/07/dan-wooding-is-busy-chap-these-days.html

Possibly the weirdest act
in Gonzoworld (and that's a fact)
is an act that's really dear to me
a peculiar project called 'Ant-Bee'
Its put together by Billy James
and a whole host of famous names
but I never thought that I would see
such arcane stuff on MTV
http://gonzo-multimedia.blogspot.com/2012/07/ant-bee-on-mtv-will-wonders-never-cease.html

And the next story to soothe your pain
is about 'Asia Featuring John Payne'
whose website has (wouldn't you know)
a cool exclusive video
all acoustic (I'm not a liar)
rendition of 'don't cut the wire'
and I'll say it, though its understood
this video is jolly good
http://gonzo-multimedia.blogspot.com/2012/07/asia-featuring-john-payne-dont-cut-wire.html

Mimi Page is a busy lass,
her recordings have a lot of class,
and I'm sure nobody objects
about her slew of side projects
and collaborations at quite a pace,
dubstep, dance and drum 'n' bass
and you know what this is leading to,
her is a remix just for you
http://gonzo-multimedia.blogspot.com/2012/07/mimi-page-jigsaw-affecting-noise-remix.html

You know I've had a wizard wheeze
Rob Ayling, the Gonzo big cheese
has been meeting more interesting folk
like Terry Christian (what a bloke)
a groovy Mancunian media guy
I met him once (he wasn't shy)
and while they partied after all
they talked about reggae and 'The Fall'
http://gonzo-multimedia.blogspot.com/2012/07/rob-meets-terry-c.html

You might have heard from some passing freak
but on the tuesday of last week,
came a veritable musical feast
when 'Carnaby Street' was released,
the new record by M. Des Barres,
a talent like his really should go far,
on this blog he drops a hint no less
that it should be free on the NHS
http://gonzo-multimedia.blogspot.com/2012/07/bloody-hell-this-man-is-good.html

Now yesterday I made you sadder
with news about Prudence's bladder
she's a lovely dog and dear to me,
she's home again and she can pee,
so although its costing me a mint,
and possibly will leave us skint,
its worth all the money I spend
to have my bulldog back again.
http://gonzo-multimedia.blogspot.com/2012/07/prudence-update.html

And so guys have another fun day
my lousy verse will be back next sunday
Posted by Jon Downes at 12:17 PM No comments:

KARL SHUKER: THE PEACOCK-PLUMED WINGED SERPENTS OF GLAMORGAN – A ZOOMYTHOLOGICAL CURIOSITY FROM WALES

British mythology is replete with folktales and legends of fabulous beasts, including many that feature dragons and other reptilian monsters. Surely the most remarkable of these, however, are the jewel-scaled, plume-winged wonders that were reportedly still existing in Wales as recently as the 1800s.