http://www.gonzomultimedia.co.uk/about.html
Yes/Rick Wakeman/Tony Ashton/Thom/Gib Guilbeau
And as Lady Selene retreats into her heavenly dance, I get on with my life once more. The news from the two Yes camps startled a lot of people yesterday. I had no forewarning whatsoever, but am not at all surprised. It is at times like this when Rock and roll is nearly as entertaining a spectator sport as British party politics! I look forward to seeing what happens next.
And now, here is the news:
THE GONZO TRACK OF THE DAY: Gib Guilbeau - Sweet S...
http://gonzo-multimedia.blogspot.co.uk/2017/04/the-gonzo-track-of-day-gib-guilbeau.html
THOM THE WORLD POET: The Daily Poem
http://gonzo-multimedia.blogspot.co.uk/2017/04/thom-world-poet-daily-poem_12.html
JEFFERSON AIRPLANE IN THE NEWS
http://gonzo-multimedia.blogspot.co.uk/2017/04/jefferson-airplane-in-news.html
YES IN THE NEWS
http://gonzo-multimedia.blogspot.co.uk/2017/04/yes-in-news_11.html
Rick Wakeman "GasTank" Polish review translated
http://gonzo-multimedia.blogspot.co.uk/2017/04/rick-wakeman-gastank-polish-review.html
Gonzo Magazine #229
THE MERCURY GOES INTO RETROGRADE ISSUE
http://www.gonzoweekly.com/
I feel like one of those disaffected US Postal Workers who climb the water tower in the middle of the township and take potshots at starangers with a high powered assault rifle. But unfortunately my wife won't let me have a high powered assault rifle and there is no water tower so I will be having ice cream instead. However, first I have to tell you about the new issue of this remarkable little magazine of ours: Part Two of Jeremy’s EXCLUSIVE interview with Larry Wallis, Alan has arty hijinx in Lithuania, John looks forward to Record Store Day and other stuff, Richard profiles Warren Haynes, and Jon is wary of peculiar children...
Groovy huh?
It’s all free!
And there are radio shows from Mack Maloney, Friday Night Progressive, and Strange Fruit. We also have columns from all sorts of folk including Roy Weard, Mr Biffo, Neil Nixon and the irrepressible Corinna. There is also a collection of more news, reviews, views, interviews and pademelons outside zoos (OK, nothing to do with small marsupials who have escaped from captivity, but I got carried away with things that rhymed with OOOOS) than you can shake a stick at. And the best part is IT's ABSOLUTELY FREE!!!
This issue features:
Miss Peregrine’s School for Peculiar Children, Ransom Riggs, Ringo Starr, The Zombies, Eric Clapton, John Lydon, Roger Daltrey, Marillion, Elton John, Pink Floyd, Strange Fruit, Friday Night Progressive, Mack Maloney's Mystery Hour, Paul O'Neill, Lonnie Brooks (born Lee Baker Jr.), Gilbert Baker, Brenda Jones, L.A. Dre (born Andre Bolton), Rosalie Hamlin,  Elyse Steinman, David Peel (born David Michael Rosario), Emmie Beckitt and Rick Wakeman, Supertramp, Ashton, Gardner and Dyke, Al Atkins, Arthur Brown, Atomic Rooster, Mary Hopkin, Jeremy Smith, Larry Wallis, Alan Dearling, Uzupis, Lithuania, UzBand, Hilltop Sheep, Muse, Kooky, A'Broken Leg, Aristokratai, Misko Gyventojai,  Deivis Nutautus, Bees (The Bites), John Brodie-Good, Record Store Day, Summer of Love, Linda Imperial Band, Jefferson Starship, 10cc, Richard Foreman, Warren Haynes, Kev Rowland, Pandora Snail, Aldaria, Aversions Crown, Battle Beast, Karda Estra, The Ed Palermo Big Band, Mr Biffo, Hawkwind, Martin Springett, Mike Morsch, John Lennon, The Beatles, Roots Manuva, Snoop Dogg, AC/DC, Weird Al, Oasis
Read the previous few issues of Gonzo Weekly:
Issue 228 (Larry Wallis)
http://www.flipsnack.com/9FE5CEE9E8C/gonzo229.html
Issue 228 (Space Pharoahs)
http://www.flipsnack.com/9FE5CEE9E8C/gonzo228.html
Issue 227 (Chuck Berry)
http://www.flipsnack.com/9FE5CEE9E8C/gonzo227.html
Issue 225-6 (The Rites of Spring)
http://www.flipsnack.com/9FE5CEE9E8C/gonzo225-6.html
Issue 224 (Hibernal)
http://www.flipsnack.com/9FE5CEE9E8C/gonzo224.html
Issue 223 (Beatles)
http://www.flipsnack.com/9FE5CEE9E8C/gonzo223.html
Issue 222 (Cruise to the Edge)
http://www.flipsnack.com/9FE5CEE9E8C/gonzo222.html
Issue 221 (Deke Leonard)
http://www.flipsnack.com/9FE5CEE9E8C/gonzo221.html
Issue 220 (Larry Wallis)
http://www.flipsnack.com/9FE5CEE9E8C/gonzo220.html
Issue 219 (Martin Stone)
http://www.flipsnack.com/9FE5CEE9E8C/gonzo219.html
Issue 218 (Mark Reiser tribute)
http://www.flipsnack.com/9FE5CEE9E8C/gonzo218.html
All issues from #70 can be downloaded at www.gonzoweekly.com if you prefer. If you have problems downloading, just email me and I will add you to the Gonzo Weekly dropbox. The first 69 issues are archived there as well. Information is power chaps, we have to share it!
You can download the magazine in pdf form HERE:
http://www.gonzoweekly.com/pdf/
SPECIAL NOTICE: If you, too, want to unleash the power of your inner rock journalist, and want to join a rapidly growing band of likewise minded weirdos please email me at jon@eclipse.co.uk The more the merrier really.
* The Gonzo Daily is a two way process. If you have any news or want to write for us, please contact me at jon@eclipse.co.uk. If you are an artist and want to showcase your work, or even just say hello please write to me at gonzo@cfz.org.uk. Please copy, paste and spread the word about this magazine as widely as possible. We need people to read us in order to grow, and as soon as it is viable we shall be invading more traditional magaziney areas. Join in the fun, spread the word, and maybe if we all chant loud enough we CAN stop it raining. See you tomorrow...
* The Gonzo Daily is - as the name implies - a daily online magazine (mostly) about artists connected to the Gonzo Multimedia group of companies. But it also has other stuff as and when the editor feels like it. The same team also do a weekly newsletter called - imaginatively - The Gonzo Weekly. Find out about it at this link: www.gonzo-multimedia.blogspot.co.uk
* We should probably mention here, that some of our posts are links to things we have found on the internet that we think are of interest. We are not responsible for spelling or factual errors in other people's websites. Honest guv!
* Jon Downes, the Editor of all these ventures (and several others) is an old hippy of 57 who - together with a Jack Russell called Archie, an infantile orange cat named after a song by Frank Zappa, and two half grown kittens, one totally coincidentally named after one of the Manson Family, purely because she squeaks, puts it all together from a converted potato shed in a tumbledown cottage deep in rural Devon which he shares with various fish. He is ably assisted by his lovely wife Corinna, his bulldog/boxer Prudence, his elderly mother-in-law, and a motley collection of social malcontents. Plus.. did we mention Archie and the Cats?
Posted by Jon Downes at 12:00 PM No comments:

WMFD.com
GIRARD, OH - A group that's looking for Bigfoot drove all the way from California because they believe the creature is hiding out in Girard, Ohio.

WEBN - iHeartRadio
Group says Bigfoot is in Ohio right now. posted by KiddChris - Just now. comment; share. He must coming through Ohio for the coneys!!! { "position1" ...

Bigfoot Evidence - blogger
The Trail To Bigfoot team say they have captured something on trail cam that will change everything. Proof of a bigfoot cloaking! Check this out: ...

Midnight in the Desert
This footage of an alleged Bigfoot was taken in January, 2017 in South Fork McKenzie River, Oregon. What do you think? Read More: Bigfoot ...

reportuk.org
Members of the group Searching for Bigfoot have rushed to an area of woodland after reports of a “credible” sasquatch sighting. The photo was ...
Posted by Jon Downes at 4:30 AM No comments:

Turns Out the Tasmanian Tiger Might Not Be Extinct After All

GeekReply (press release) (blog)
Move over Bigfoot and Loch Ness Monster, the Thylacine, otherwise known as the Tasmanian Tiger, is the animal scientists are actively searching for. 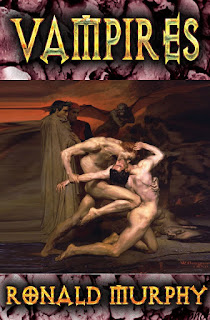 Join cryptozoologist and folklorist Ronald Murphy as he journeys throughout history in his quest to uncover the impetus for the archetype of the vampire. Beginning at the lair of cannibals at the dawn of human history, explore the images and evolving ideas of the vampire, tracing these concepts up to the information age. Keep a stake close by as you uncover the world of the vampire.

At the moment this offer is only for customers in the United States, but never fear: Ronald has a team of especially trained goblins working on it, and we shall be selling books worldwide very soon...
Posted by Jon Downes at 1:00 AM No comments:

ON THIS DAY IN - 1096 - Peter the Hermit gathered his army in Cologne.
And now some more recent news from the CFZ Newsdesk