THE GONZO BLOG DOO-DAH MAN IS WONDERING WHY

Guess what is coming back in the New Year

Squatchable
Fisherman Catches Bigfoot On Video posted by BigfootEvidence. Share on Facebook. Tuesday, November 03, 2015. This is pretty scary. This fly ...

Bigfoot Evidence
The Paranormal Review takes a look at the cone head bigfoot footage captured by Kirk Stokes. Stokes is known for his vast library of bigfoot images ...

Documentary Addict
Bigfoot - Ape Island ... Documentary on the famous Ape Island - home of Bigfoot Sightings and eyewitness testimony and reports. Scientific research to ...
Posted by Jon Downes at 11:00 AM No comments: 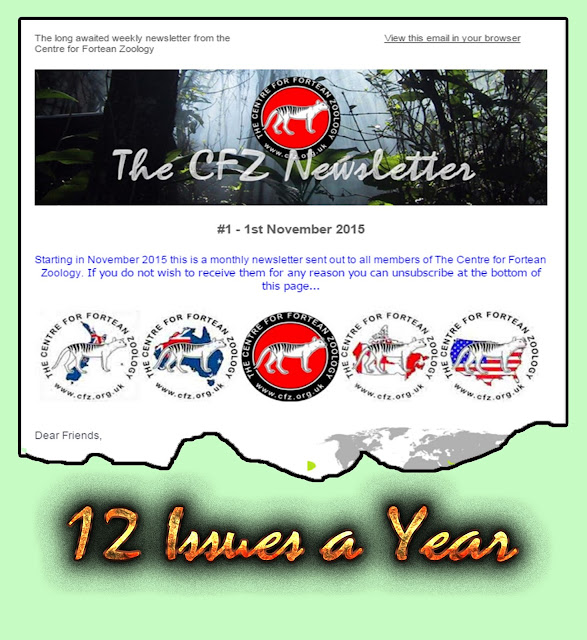 I feel mildly embarrassed about this, because I have been promising a members only CFZ newsletter since the beginning of the year, but a lot of things have gotten in the way, however here it is, and it will be appearing on or about the first of the month from now on. This is not replacing Animals & Men. However, as of earlier this year new issues of Animals & Men can be purchased in two formats, as a printed paperback and as a Kindle eBook. In addition, a FREE “flipbook” digital version is available to read online. All members of the CFZ have been added to this database, and will be receiving the newsletter from now on for the duration of their membership.

ON THIS DAY IN 1846 - A patent for an artificial leg was granted to Benjamin Palmer.
And now some more recent news from the CFZ Newsdesk