CFZ Australia never cease to amaze me with how prolific they are:

Keep up the good work guys.

Llyn Glaslyn in Wales is 126 feet (42 metres) deep and is said to be the location of a legendary monster the 'Afanc.'

The Afanc was a mythical water monster that originally abided in Llyn-yr-Afanc (the Afanc Pool) in the River Conwy. It was a huge beast who would cause flooding to the local area by its thrashing about. Attempts had been made to kill it but to no avail. It was decided to try and entice the creature from the pool and move it to a place where it could not cause any more trouble. Iron chains would be used to bind the creature and two oxen would then drag the creature to another lake. A local girl sang by the lake and the creature left the lake to get closer to her. Local men immediately bound the creature and started to drag it to Llyn Ffynnon Las (now called Llyn Glaslyn). The creature apparently jumped into the new home on arrival and is said to be trapped there.

On The Track is happening. It is just that trying to make it when everyone involved has this filthy disease is a slow and laborious process. About half of the new episode is finished including a homage to Scorpio Rising and Jon's horrid impersonation of Billy Joel. Sadly, however, you will just have to wait.
Posted by Jon Downes at 12:09 PM 1 comment:

This 37th collection once again really is a collection of completely uncategoriseable stuff, including the Vatican on miracles, golfing deaths, a Roman palace discovery, Elvis's death fraud, a rare bible, and lots more. It doesn't get much better than this. Good stuff.
HERE
Posted by Jon Downes at 12:00 PM No comments:

WE KNOW WHERE THEY COME FROM, DON'T WE BOYS AND GIRLS? 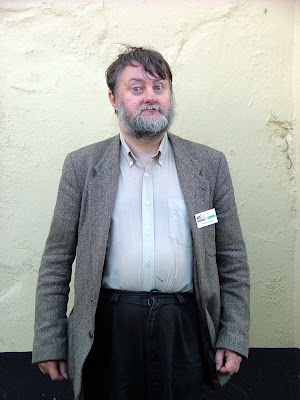 I enclose Page 1 of The Awesome Secret of Spring-Heeled Jack to cheer you up in your swine-flu.

“I say, Redders, old bean!”
Sir Jonathan Downes, Bt, leaned forward in his chair, beaming from behind his monocle in the tolerant way he always adopted for the dealing with the less endowed.
“Uh!” answered Nicholas Redfern in the monosyllabic fashion so widespread in his native north of England.
“Have you read about this blighter Spring-Heeled Jack in the jolly old newspaper?”
“Um!” replied Redfern.
In listening to Redfern, paying attention to his intonation was always vital. “Um!” could mean yes, no or even perhaps, depending on the way it was said.
“He goes around blowing gaseous vapours into the faces of parlourmaids and other lowly folk,” informed Downes, thoughtfully stroking his h 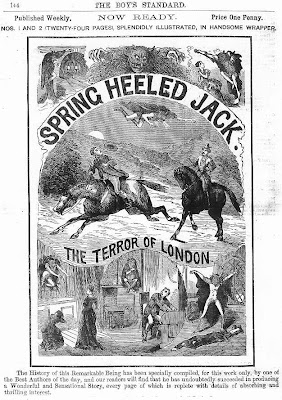 andlebar moustache. “I think, Redders, we must investigate this.”
He rang for the butler.
“Inglis, we shall need the carriage at half past four. We are going to London,” he told that worthy. “I am afraid, sir, that the horses are totally clapped out,” the butler replied.
Posted by Jon Downes at 11:45 AM No comments:

On this day in 1903 Thomas Edison electrocuted an elephant as part of his scheming to turn public opinion against Tesla’s AC current. Edison ultimately failed in this and his animal electrocutions (the elephant was part of a long line of such public displays, which usually involved stray dogs or cats) led to the development of the ‘electric chair’ by his technician Harold P. Brown as a form of capital punishment. The electric chair’s first public display was in the execution of William Kemmler in New York. The execution turned into a gory farce when, after passing 1000 volts of electricity through Kemmler for 17 seconds and declaring him dead, it was noticed that he was still breathing. The chair was turned back on, this time set to 2000 volts, and Kemmler’s blood vessels burst, sending blood oozing out of his skin, and the body caught fire. Stephen King based a key scene in The Green Mile on the incident.
And now, the news:

There can only be one video responce to that really (also check out the hillarious 'dad dancing' in the crowd):
http://www.youtube.com/watch?v=pPTP_JyQpl8
Posted by Jon Downes at 11:43 AM No comments: