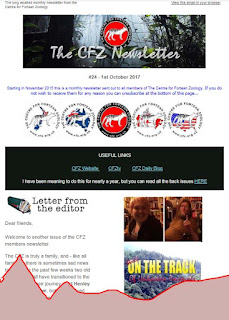 For those of you not in the know, at the beginning of each month we send out a newsletter to all members of the CFZ. The most recent (which went out on Monday morning) included articles on OTT, Stone Turtles, dead elephant mistaken for U Boat, Patreon, early chupacabras hoax, a vintage mystery cat,  a new book on vampires, Notes and Queries etc.

If you want to view a sample issue click here: http://tinyurl.com/pw7rw9l
Posted by Jon Downes at 5:00 AM No comments:

MusicLessons.com
Physical Evidence of Bigfoot like Creatures (Documentary) The Fouke Monster, also known as the Southern Sasquatch, is a legendary cryptid ...

How to Attract the Northern Minnesota Bigfoot

96.7 The River
Bigfoot has been reported multiple times in Minnesota, especially in Remer, and now there's a way to lessen your chances of scaring him off while ...
Posted by Jon Downes at 5:00 AM No comments:

ON THIS DAY IN - 1535 - The first complete English translation of the Bible was printed in Zurich, Switzerland.
And now some more recent news from the CFZ Newsdesk