Once again we have a mellifluous melange of Fortean Fun:
- Barry Tadcaster and Orang Pendek
- Jon reads a story from Douglas Adams
- The latest news from Wally the Welsh Walrus
- Has Prudence returned to haunt the pink bathroom?
- Doug Hjicek interview (part two)
- How Doug made Giant Squid history
- Doug's new idea for filming Bigfoot
Posted by Jon Downes at 1:37 PM No comments: 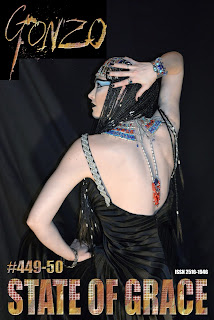 Gonzo Weekly #449/50
THE GRACE ISSUE
www.gonzoweekly.com
This magazine continues to go off on strange tangents that I never expect, but I am very happy to see it do so. What is in this week? Ooooh lots of things. Such as Cary Grace, The Beatles, Paul McCartney Gemma Doyle Trilogy, Pandemic stories, Configa Introducing DJ Views, Alan's New Music and much more...
And there are radio shows from Mack Maloney and Friday Night Progressive, AND Merrell Fankhauser, and the Real Music Club, AND Strange Fruit, there is a column from Kev Rowland, and C.J Stone but Mr Biffo, Tony Klinger and Neil Nixon, are on hiatus. There is also a collection of more news, reviews, views, interviews and dibblers who have got the blues (OK, nothing to do with tiny marsupials who are listening to the new Bob Dylan album, but I got carried away with things that rhymed with OOOOS) than you can shake a stick at. And the best part is IT's ABSOLUTELY FREE!!!
Posted by Jon Downes at 3:00 AM No comments:

ON THIS DAY IN - 0451 - Roman and Barbarian warriors brought Attila's army to a halt at the Catalaunian Plains in eastern France.