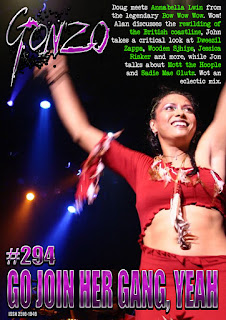 In this remarkably eclectic issue, which is one of my favourites for a while, Doug meets Annabella Lwin from the legendary Bow Wow Wow. Wow! Alan discusses the rewilding of the British coastline, John takes a critical look at Dweezil Zappa, Wooden Sjhips, Jessica Risker and more, while Jon talks about Mott the Hoople and Sadie Mae Glutz and Graham brings us up to date with Hawkwind news. YOU CANNOT GET MUCH MORE ECLECTIC THAN THAT!

And there are radio shows from Strange Fruit, AND Mack Maloney, AND Friday Night Progressive is on hiatus this week, AND there are columns from all sorts of folk including Kev Rowlands AND the irrepressible Corinna, although Neil Nixon, and Roy Weard, and C J Stone, and Mr Biffo are having a well-deserved week off. There is also a collection of more news, reviews, views, interviews and red kangaroos who've lost their shoes (OK, nothing to do with the largest extant macropods who are in a quandry with regards their footwear, but I got carried away with things that rhymed with OOOOS) than you can shake a stick at. And the best part is IT's ABSOLUTELY FREE!!!


SPECIAL NOTICE: If you, too, want to unleash the power of your inner rock journalist, and want to join a rapidly growing band of likewise minded weirdos please email me at jon@eclipse.co.uk The more the merrier really.
Posted by Jon Downes at 3:55 PM No comments:

THE GONZO HEN HOPS SOME MORE

ON THIS DAY IN -  1099 - Christian soldiers on the First Crusade march around Jerusalem.
And now some more recent news from the CFZ Newsdesk