And so life trundles on. The weather is still atrocious; it looks like November outside and all the animals are refusing to go outside (which is quite wise of them). However, we have some bloggystuff to warm you up:

Rick Wakeman is a massively talented fellow, but I had no idea that his career has included a stint interviewing rock and roll types. Yesterday whilst looking for information about Chinese water beetles I found this rather interesting video, in which Rick Wakeman interviews Judas Priest.
http://gonzo-multimedia.blogspot.co.uk/2012/07/judas-priest-interviewed-by-rick-wakeman.html

I always like to come across enthusiasts, and this review that I stumbled across yesterday afternoon is certainly enthusiastic. The person who wrote it comes across as a very sincere fan of this remarkably groovy band. That is good, 'cos so am I.
http://gonzo-multimedia.blogspot.co.uk/2012/07/asia-featuring-john-payne.html

As I may have mentioned once or twice, Michael Des Barres has a new album out (and it is really jolly good). And to promote it, he is doing interviews left, right and centre. I am doing my best to keep up but it is not an easy task.
http://gonzo-multimedia.blogspot.co.uk/2012/07/michael-des-barres-taster-for-exciting.html

For no other reason than the fact that he makes me laugh, today we are paying another visit to the world of the 9 Henrys and the incomparable Peter McAdam, who I honestly think is one of the funniest people with whom I have ever had dealings.
http://gonzo-multimedia.blogspot.co.uk/2012/07/another-visit-to-9-henrys.html

This morning I was sent the Jefferson Starship mid-year report, and it is so jam packed with good stuff that I really could not resist reposting it in its entirety. So here it is (and yes, JS fans, they are playing in the UK later this year)
http://gonzo-multimedia.blogspot.co.uk/2012/07/the-jefferson-starship-mid-year-report.html

Just as I was putting the finishing touches to today's Gonzo Daily, the Gonmzo grande fromage sent me this, with the instructions that I MUST post it. Having looked at it, IO can see why. As one commentator notes: "John Lennon, the most progressive of The Beatles, would have been delighted ... a real adventure on the borderlines between pop and jazz."
http://gonzo-multimedia.blogspot.co.uk/2012/07/mike-westbrook-band-off-abbey-road.html

And that is it for today. Ta-ra!
Posted by Jon Downes at 1:32 PM No comments:

On this day in 1925 Adolph Hitler's Mein Kampf was first published. The book set out Hitler's and the Nazi party's ideology leading to one of the greatest organised slaughters of civilians ever seen. Nazi concentration camps were responsible for the deaths by exhaustion, malnutrition, disease and mass murder of millions of disabled people, people with hereditary genetic problems, homosexuals, Jews and political opponents of the Nazis. Or if you were lucky you might avoid the camps and just end up sterilised instead. Hitler and his cronies were perhaps the most evil people to have ever lived and like most people with warped morals they tried to justify their actions to make them seem acceptable, to this end top Nazis actually invented a cult religion for themselves involving magical ceremonies and collecting powerful artefacts from other religions, like the spear of destiny, in a retarded attempt to give themselves some legitimacy.

The truth behind the Nazi's, as told by Walt Disney:

I am greatly indebted to Swedish cryptozoological artist/sculptor/film-maker Richard Svensson for bringing this hitherto little-reported lake monster to my attention, and also for so kindly presenting me with his wonderful model of it...
Read on...
Posted by Jon Downes at 12:40 PM No comments: 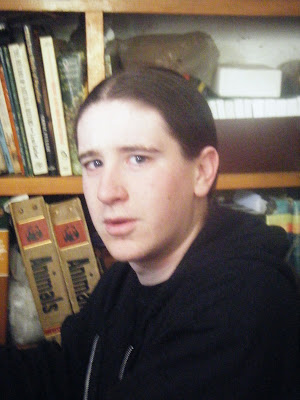 As I write, Max will be landing in Cyprus, where he will stay for the next two months beginning a self-funded and highly impressive beetle conservation project, which will hopefully be part of his PhD researches. We are very fond of Max, and consider him part of our extended family; we are very proud of him and wish him all the luck in the world.
See you in September dear boy.

I've always been fascinated by clowns, jesters, and their predecessors, the characters of the Commedia Dell'Arte, so accompany me now as I explore the colourful history and evolution of these most enigmatic of entertainment figures.
Read on...
Posted by Jon Downes at 11:45 AM No comments:

I have reposted the story to my blog and gave "Bigfoot Evidence" the credit: it is a story that I had posted on before and I thought I could correct a couple of mistaken impressions that Commentators had expressed. http://frontiersofzoology.blogspot.com/2012/07/conversation-with-justin-smeja-i-killed.html
Posted by Jon Downes at 11:34 AM No comments: