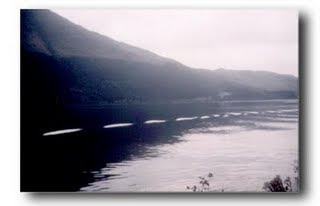 Loch Lochy (Scottish Gaelic: Loch Lochaidh) is a large freshwater lake located southwest of Loch Ness. It is ten miles long and one mile wide and is said to be the home of Lizzie, a creature described as similar to the Loch Ness Monster, Nessie. Loch Lochy is only separated from Loch Ness by Loch Oich. Loch Oich is said to contain several holes reported to go as deep as 2000 feet. This of course has given rise to the possibility that animals from Loch Ness are also being seen in the other two lochs.

Lizzie was first sighted in 1929 by two game wardens near .

The two game wardens believed at first that they where looking at nothing more than debris from a large fallen tree. When one of the two men took a closer look through his telescope they soon realised that they were looking at much more than a fallen tree but a large unidentified beast. They continued to watch the creature swim for about a mile before it submerged back into the depths of the loch.

1930: A man living on the loch side saw a strange creature in the water one day - he told his wife never to wash her clothes there again! Other reports came and in 1933 the monks of Fort Augustus Abbey began to chronicle known sightings.

In 1960, while staying in a caravan near Glen Fintaig, Eric Robinson, his family, and nine other witnesses spotted what looked to be a standing wave in the centre of the loch. It appeared to be caused by a living creature. Viewing the animal through binoculars he estimated that the animal was between 30 and 40 feet in length, with a dark spine and a paler underbelly. Robinson and the other witnesses claimed the creature began to roll in the water exposing a huge flipper before disappearing into the loch. This sighting was witnessed by nine other people.

1975: Mrs. Margaret Sargent of was passing the loch with her husband and family near the Corriegour Hotel when they saw an unusual wake on the flat, calm loch. A long black shape could be seen moving through the water. As she took a photo, the object disappeared below the water and the subsequent picture showed only the wake. (see link below to Nik Sargent’s story)

In 1996 while fishing for pike in the loch, angler Alastair Stevenson encountered a creature approximately 18 feet in length and roughly the shape of an overturned rowboat. The creature reportedly took Stevenson’s bait and began to pull the vessel. Stevenson was quoted as saying "I knew immediately it wasn't a pike with that ferocity. I had to stop the line but when I did the power started dragging the boat behind it. All the time I'm thinking it was like a scene from Jaws. Fortunately my line and rod snapped and that was the end of that. I have no idea what it was, but it was a lot bigger than a pike."

An expedition the same year led by cryptozoologist Cameron Turner had contact with a large object near , where the very first reported sighting took place. The contact was estimated as being between 18 and 20 feet in length, and was moving at a depth of 160 feet below the surface. Approximately two minutes later, after the boat sharply turned starboard in order to pursue the contact, a second contact was made, this time at a depth of 200 feet. As the boat approached the centre of the , above an abysmal trench, which is reportedly over 300 feet deep, the objects disappeared. Cameron returned to the again in September 1997, and hired a boat from the family of Alastair Stevenson, the same man who had the 1996 encounter with the creature. The team had another contact about 270 feet down in the loch. During the 3 minutes the team managed to follow the contact they where able to get clear pictures of the sonar screen. Nothing. They also had readings showing sonar hits of over 2000 feet deep, which appeared to be holes in the bottom of the .

Loch Oich is located between Loch Ness and Loch Lochy in the Great Glen and the three lochs are connected and form part of the . A strange beast has also been reported in Loch Oich. Described as a dog-headed serpent with a horse-like mane, two humps, black skin and a snake-like neck, very like the descriptions of the creature reported in Loch Ness.

In 1961 hoaxers reportedly planted an artificial monster in the dark waters of Loch Oich in order to take some photographs and cash in on the monster's popularity. This has not helped serious investigation in the area.

Lizzie, a three humped first cousin of Nessie, the Loch Ness Monster, surfaced again last week on Loch Lochy.And several people, locals and vistors, confirmed on Thursday the sighting of the water beast.Staff and guests at the Corriegour Lodge Hotel watched in amazement as a dark shaped twelve foot long "something" caused a commotion on the loch which is overlooked by the hotel.Guests and waitresses at Corriegour Lodge rushed to the picture window of the dining room to get a better view of the creature which had come to the surface."At first we thought what we were seeing was an upturned boat", said husband and wife Derick and Lindsay Burney, from Hornchurch, who were having dinner at the hotel."Then suddenly it started moving backwards, and then round in circles, and we noted that it had three humps. It was causing quite a stir. It was very large, about twelve feet in length, and it wasn't a seal or any other mammal we've ever seen before. And we've been coming to Loch Lochy on boating holidays for the past seven years" Lorna Bunney, joint proprietor with her husband Rod, of Corriegour Lodge revealed that she had originally seen a marine animal in the loch three weeks previously."I thought at first that it was just the wake from a cabin cruiser but it was too fast, and the ripples too close together for that. I ran to look out of the kitchen door and I realised it was some kind of creature. I've never seen anything like it before." Source:

The Sargent family 1975 sighting told by their son:

And this report from 1996 claims to have found a body:

It is intriguing that the first sighting of Lizzie was before the 1933 media frenzy over Loch Ness. There are reports of a hole in the bottom of Loch Ness (Edward’s Deep). Perhaps there are tunnels between the Lochs, but it seems unlikely that no one has found them before. It still is an interesting idea that the creatures (or fish or eels or whatever they are) could travel between the lochs, and hence their ability to hide from sonar and researchers. A thought to cogitate over.

Reminds me of the tales of Morag, the Loch Morar monster. Or perhaps the monster of Loch Maree or the one in Loch Shiel... are there any Lochs in Scotland without a monster?

In the spring of this year my good lady, The Bairn and I. Did the old Four Monsters and a Christening. Paying a visit to Morar, Ness, Locky and Oich. We nivver got see much as a wiff o'monster but we got to wet tha baby's heed in Banff!

I recall reading in....Monstrum I think, When a Scot was asked how many lochs where haunted by monsters, he replied "Every last blessed one of them."