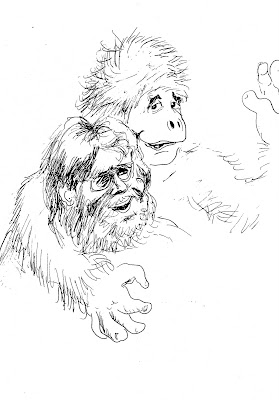 Life is a little complicated at the moment. Various members of my team are undergoing life crises: two people have been made homeless, and another has taken an overdose. I am also unwell at the moment - a benign cyst that I have had for nearly 20 years has just stopped being benign, and although I am on medication for it, it hurts like billy-oh.

However, life continues. We are working on Nick Molloy's Predator Deathmatch at the moment, with several other titles due out of the starting gate in the next few weeks. These include:

We are also working on issue 47 of Animals & Men, which will be with you by Christmas, and the 2010 Yearbook, which will be on sale at the end of the year.

So forgive us if we appear tardy. Just remember that there are only a handful of us, and that we do our best.
Posted by Jon Downes at 12:31 PM

You all seem to be doing very well considering. Just received my first copy of Animals and Men (Issue 46) and am very pleased :)

I hope everyone finds some peace and happiness before the festive season.

*hug* sounds awful but almost glad it is not just me that is having a bad time at the moment. We will just have to try and think that this is just a passing phase and things will improve. thinking about you all xx