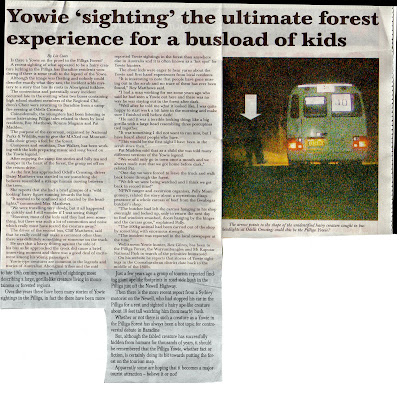 A few months ago I sent you some info of yowies at Kempsey, NSW Australia.

The three attachments are from a very good sighting in the Pilliga scrub, North West NSW.

I hope you find this of interest. This came from our local paper today. Also, a guy I was working with in Kempsey told me that an old aboriginal guy who lives out at Bellbrook, which is about 50kms up river from Kempsey, actually has the remains of a yowie. Apparently he has had the skull & other body parts stored in a shed for years, but because of aboriginal superstitions, he won't allow any white people to see it. He did let his grandchildren go in to see it and they ran out pretty scared.

Apparently it looked like a hairy human. The guy that told me about it was actually told all this by the old aboriginal that supposedly has the remains.

Email ThisBlogThis!Share to TwitterShare to FacebookShare to Pinterest
Labels: yowie

One of the rangers admitted that this was a hoax/prank.

The story about supposed yowie remains is typically vague and most likely to be bogus as well.