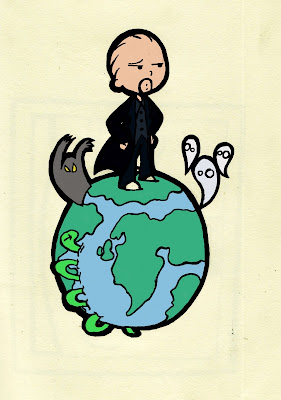 The forthcoming issue of Paranormal Magazine has just been 'put to bed' as we editors saucily have it, and although the current issue, which includes Richard Freeman's absorbing article on monsters in urban environments, will be on sale for a couple more weeks yet, I thought you might enjoy this sneak-peak.

Richard's latest article is a guide to organising your own monster hunt, one which I'm sure will inspire a lot of readers. I've been working with the Illustration Department of our local university and took the opportunity to ask one of the students, a talented cartoonist called Steph Murta, to come up with some amusing pics to go with it. I sent Steph a photo or two of Richard so that she could include him in the illos. I hope the following, which is accompanied by a quote from Richard's piece ('I have travelled the globe trying to track down beasts of legend'), will make you chuckle. I think Steph has captured the essence of the man! (Though I'm not sure what those things are creeping up to his left - monster sperm?)

Paranormal Magazine issue 37 will be out on May 29 and will also include a fascinating article by Dr Karl Shuker on 'Nightmares of the Dreamtime'.

RICHARD FREEMAN WRITES: They have made me look like the Master cerca 1972! Since when do I hunt ghosts?

I remember when you went on a ghost hunt - at the flat under the Iron Bridge, belonging to that blonde floozie about six years ago (sniggers)