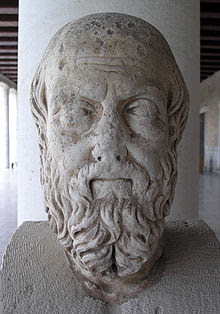 One of the oddest things Herodotus heard of on his travels were stories of giant ants.

“There are other Indians further north, round the city of Caspatyrus and in the country of Pactyica, who in their mode of life resemble the Bactrians. These are the most warlike of the Indian tribes, and it is they who go out to fech the gold-for in this region is a sandy desert. There is found in this desert a kind of ant of great size - bigger than a fox, though not so big as a dog. Some specimens that were caught there, are kept at the palace of the Persian king. These creatures as hey burrow underground throw up sand in heaps, just as ants in Greece throw up the earth, and are very similar in shape. The sand has a rich content of gold, and this it is that the Indians are after when they make their expeditions into the desert. Each man harnesses here camels abreast, a female, on which he rides, in the middle, and a male on each side in a leading rein, and takes care that the female is one who has as recently as possible dropped her young.

That, then, is how these Indians equip themselves for the expedition, and they plan their time table so as to actually get their hands on the gold during the hottest part of the day, when the heat will have driven the ants underground. In this part of the world the sun is not, as it is elsewere, hottest at noon, but in the morning: from dawn, that is, until the closing time in the market. During this part of the day the heat is much fiercer than it is at noon in Greece, and the natives are said to soak themselves in water to make it endurable. At midday the heat diminishes and it is much the same here as elsewere, and as the afternoon goes on, it becomes cooler and cooler, until at sunset it is really cold.

When the Indians reach the place where the gold is’ they fill the bags they have brought with them with sand, and start for home as fast as they can go; for the ant (as it is said in the Persians’ story) smell them and at once give chase; nothing in the world can touch these ants for speed, so not one of the Indians would get home alive, if they did not make sure of a good start while he ants were mustering their forces. The male camels, who are slower than the females, soon begin to drag and are left behind, one after the other, while the females are kept going hard by the memory of their young, who were left at home.”

It has been suggested that the ‘ants’ were in fact marmots, burrowing rodents related to prairie dogs, who inhabit the area. However marmots are not known for their aggresiveness and are not larger than foxes (unless you are comparing a woodchuck with a fennec). He story may have been concocted by local people to keep other away from the gold bearing area in a ‘Scooby Doo’ style.
Posted by Jon Downes at 5:48 PM