NAOMI WEST: The tale of the mockingbird and the hognose snake 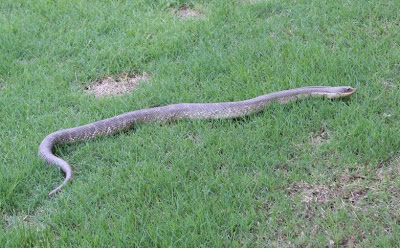 These are pictures of a snake that explored my backyard for a good while this afternoon.

As you can see, the Mocking Bird wasn't too happy. When the bird tried to frighten the snake off, the snake flattened his head and neck. I did some research, and concluded that this is an Eastern Hognose snake, which is native to the eastern United States, but can be found throughout other regions as well, including my own Central Texas. 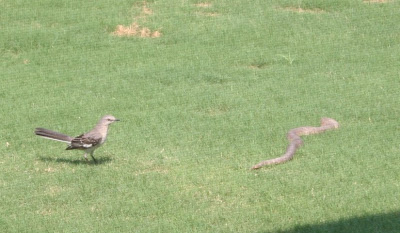 Hognose snakes eat mostly toads and frogs, but will eat some birds and other small mammals. This snake is easily identifiable by its upturned snout, stout body, and ability to flatten its neck and head, much like a cobra. It is only very slightly venomous, however, and if its flattening and hissing doesn't frighten you away,it will roll over and play dead. If you try to turn it upright, it will roll back over and attempt to fool you again. 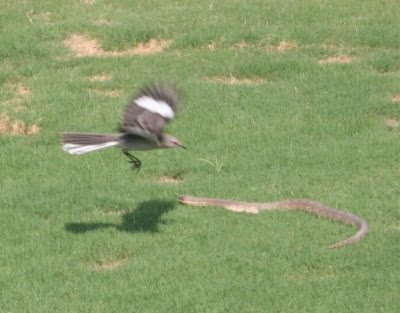 Pardon the quality of the pics with the bird -- I took them in a hurry through the screen.

EDITOR's NOTES: Naomi originally wrote that the snake is non venomous, and she is technically right. However Members of this genus have enlarged maxillary teeth and possess a slightly toxic saliva. In a few cases involving bites from this species, the symptoms reported have ranged from none at all to mild tingling, swelling and numbness. Nevertheless, they are generally considered to be harmless.

And for those only familiar with the word `mockingbird` from the novel by Harper Lee, and the songs by Eminem, Inez and Charlie Foxx, Carly Simon and James Taylor, Grant Lee Buffalo and Barclay James Harvest (I had no idea how many different songs there were with this title), mockingbirds are an exclusively New World passerine family that have been popular cage birds because of their extraordinary powers of mimicry, in the wild "mimicking the songs of insect and amphibian sounds as well as other bird songs, often loudly and in rapid succession" (Wikipedia)