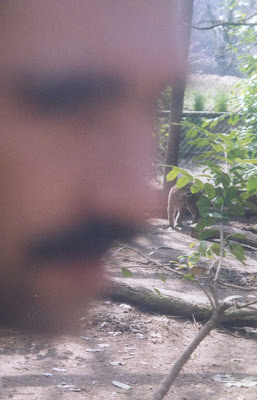 Working on the new movie Emily and the Big Cats has opened up a whole string of fond memories. Back in the day (the summer of 1997 actually) Graham, Richard and I worked on a number of TV projects together whilst Richard was supposed to be studying and me and Graham were meant to be looking for work.

During one show that completely escapes me, we were filming at Dartmoor Wildlife Park (as it was then) and the then owner Ellis Dawe let us into the ramchackle puma cage in order to film a PTC.

This is one of the few stills that survices. The vaguely humanoid shape in the foreground is Graham, but there, half hidden in the undergrowth only a few feet away is an adult puma.

Those were the days. I bet the Health and Safety Nazis would never let three middle aged (OK, two middle ageed and one younger) nutcase into a cage full of pumas in these degenerate days.