Chessie - the monster of Chesapeake Bay 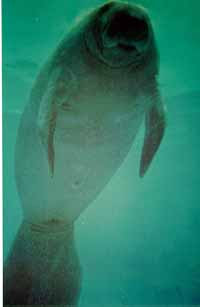 For hundreds of years there have been reports of a strange creature swimming in the waters of Chesapeake Bay on the coast of Maryland. It has been described as a long, dark, serpent-like creature, over 30 feet long, that swims along at almost 10 miles per hour. One of the early reports of Chessie was made in 1936 when a military helicopter flew over the Bush River. The crew reported seeing something reptilian and unknown in the water.

In May of 1982, the first hard evidence of Chessie's existence arrived. While at their Kent Island home, the Frew family, along with friends, believed they spotted Chessie and they made a videotape. Frew and his wife spotted the creature in shallow, clear water about 200 yards from the house. He video taped the creature as it swam toward a group of swimmers. It dove beneath the swimmers and reappeared on the other side of them. The creature they saw was about 30-25 feet long, 1 foot in diameter, dark brown with a humped back. In 1978, a retired CIA employee, Donald Kyker, also reported seeing Chessie and 3 others about 75 yards off shore. His neighbors, the Smoots', also witness the creatures. They gave descriptions of a 30 ft, sleek, dark gray creature swimming about 7-8 miles per hour.

In the summer of 1982, the Smithsonian had a minisymposium to determine if the videotape was indeed evidence of Chessie's existence. Along with the video, there was a photograph taken by a woman who was previously afraid to bring it to public attention. The officials concluded that the object was definitely alive, but they did not conclude what it was.

Although the animals have been reported in the bay for over 200 years it wasn't until the mid-1980s that reports really began to proliferate, and recently we have been given new evidence which it - although it does not explain the older reports of a snake-like creature in the dark waters, certainly sheds light on some of the more modern sightings. Exclusively We can reveal that nearly every summer since 1994 at least one manatee has strayed north from its home environment in the sub-tropical swamplands of Florida and arrived hundreds of miles north in Chesapeake Bay. One animal - nicknamed "Chessie" - even reached as far north as Rhode Island.

Whilst it is undeniable that global climate changes over the past few decades have caused a number of anomalies in animal migration, the available evidence suggests that there is nothing unusual about these straying sirenians, and it is tempting to hypothesise that Florida manatees have always strayed into these northern waters on occasion. We would like to suggest that it is not unlikely that generations of fishermen and seafarers who have reported seeing a giant serpent in Chesapeake Bay have actually been seen nothing of the sort. Manatees are extraordinary creatures. Even in their natural environment they are startling to look at. It does not take any great leap of imagination to suppose that a hapless eye-witness upon seeing a great roll of flesh undulating in and out of the water, as the massive sea mammal swam slowly along, would imagine that they were seeing that bete noire of the seafaring community - the great sea-serpent!

It is not impossible that - as a result of global climate change - these gentle giants may well expand their range northwards and become a familiar sight along the Atlantic seaboard. However, if they do, will the reports of snake-like creatures in the bay come to an end? Or are there in fact two entirely separate zoological mysterues to be solved off the Maryland coast?

A military helicopter in the US in 1936? Very unlikely. In 1936 helicopters were still in the Wright brothers stage. A mistake in the year perhaps?