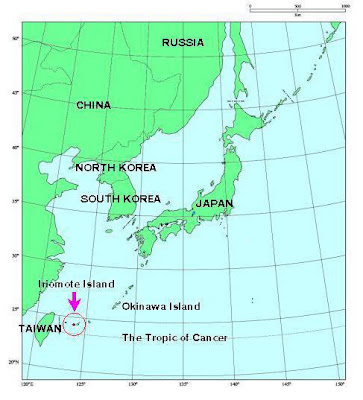 In 1965 the Japanese naturalist Yukio Tagawa descovered a small unkown species of wildcat (below left) living on the remote island in the Yaeyama chain, the South West of Okinawa. The 289 km² island is home to a population of around one hundred specimens of Prionailurus iriomotensis or the Iriomote cat. It is about the size of a large domestic cat and is cionsidered to be the most primitive species of cat in the world, as well as one of the rarest. It has been delcared a National Japanese treasure.

But the small human population of Iriomote speak of a second much larger cat they call the Yamamaya or Yamapikarya. They say it is the size of a sheepdog, and has markings like a leopard. The coat is yellow or orange in colour with black spots. The cat’s tail is said to be long in proportion to it’s body. As most of Iriomote is still poorly explored the chances of the Yamamaya being a genuine species unknown to science are good.

There are some 47 eyewitness accounts on record but they have dropped off since the 1960s possibly because the creatures are moving inwards towards the uninhabited centre of the island. 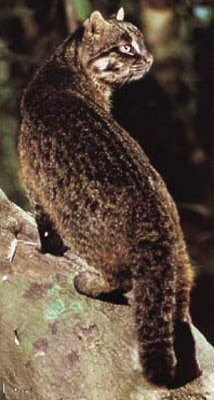 Brent Swancer, an American living in Japan has collected eyewitness accounts of this and other strange creatures.

In the summer of 1978, a hunter reported seeing a large cat lounging in a tree. He described the it as having spots that were “oddly shaped,” although exactly how they were odd is not mentioned, and a long tail that hung down “like a vine.” He watched it for several minutes before the cat seemed to suddenly notice him, after which it bounded down the tree and into the forest with what he says was extraordinary speed and agility. The cat did not make any sounds.

In 2003, a Mr. Shimabukuro, who runs a fishing boat on the island, spotted a Yamamaya while he was in the mountains setting traps for wild pigs. Whilst in a clearing he saw a large, spotted cat, estimated at slightly over a metre long. It suddenly leapt down from the top of a large boulder, landing right in front of him before disappearing into the forest. As the cat retreated, the man noticed that it was spotted, and had a remarkably long tail.

In September of 2007, a large cat was seen by a Mr. Aiyoshi, a professor at Shimane University in Japan. He was sitting on a beach fishing for a research project when a dark shape appeared from the thick forest just 2.5 meters from where he sat. He described it as being a meter in length, with a very long tail and black spots, and looking similar to a leopard. The professor reported how the cat stared right at him before calmly slinking into the shadowy forest once more.

It is possible that the Yamamaya is an island sub-specesis of the clouded leopard Neofelis nebulosa. A subspecies of this cat called Neofelis nebulosa brachyura once existed on Taiwan 200km to the west of Iriomote but there have been no confirmed sightings since the 1980s. A new species of clouded leopard, Neofelis diardi, was discovered on Borneo in 2007.Around 90% of the Iriomote is mountains steeped in subtropical forest, the perfect home for such a beast.