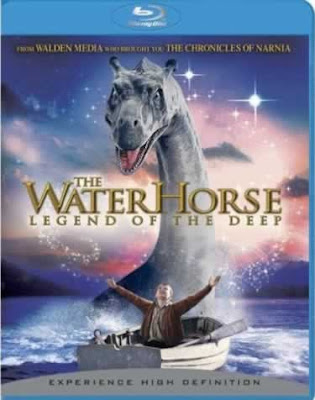 I'm incredibly behind the times, I know, so I won't go too in depth about this (also, it's nearly six o'clock and I'm in Heywood library dreaming about what my sister might be cooking for tea tonight....) but I watched The Water Horse on DVD the other night, which tells the story of Angus, a little boy growing up a stone's throw from Loch Ness during World War Two, who finds an egg that turns out to hold an infant water horse (if any of you want to know more about the fabled water horse I urge you to buy Glenn Vaudrey's wonderful Mystery Animals of the Western Isles).
With help from his sister and their new friend handyman Lewis, Angus rears the water horse, named Crusoe, and eventually releases it into the Loch, inadvertantly creating one of cryptozoology's more famous myths - see, Jon and Richard, it's NOT an eel, it's a mythological being, thank you very much.
As I said, the film has been out for a couple of years now, I think, but I've only just seen it so if anyone else is as behind the times, get down to Blockbuster or whatever other place you get your DVDs from, and take it out! And watch out for the fantasy-genre rip-off of Free Willy towards the end.
Incidentally, in one scene I thought I noticed an underwater version of Stonehenge in the loch. Does anyone know if there really are submerged stone circles in this loch or any other lake in Britain? Interesting idea....
Posted by Jon Downes at 10:39 AM

There's the usually submerged remains of a stone circle in Walshaw Dean reservoir which was apparently unusual in that as well as the normal circle of boulders, there was a horseshoe shaped drystone wall in the centre of the circle.

The only known photo of the place pre-reservoir is 1902, and thus rather grainy; it has emerged several times since in drought years and of the 10 original stones a mere 7 remain, and the drystone walling is long gone.

There are several 'wood-henges' dotted around the British coast that are occasionally revealed by the tides, but as far as I'm aware there are no sunken stone circles in British lakes. There is however an underwater gnome garden, with a picket fence, deep in Wastwater in the Lake district.

The gnome garden is a fairly modern creation though, lest anyone get too excited about it:
http://news.bbc.co.uk/1/hi/england/cumbria/4263761.stm

There are often myths about lakes swallowing up towns in Wales due to their citizens being a bit on the dodgy side. The two most famous of these are Bala Lake and Llangorse Lake, which as many of you are probably aware are also reputedly home to lake monsters. As old Bala town was supposedly submerged by the lake in pre-Roman times, were this story true chances are there would have been a stone circle submerged too as the Ordovices were quite fond of such things.

However, no evidence of a submerged town under Bala Lake has ever been found and it is likely that this story was a complete invention of Iolo Morganwg.

A report I have from the Academy of Applied sciences USA has underwater sonar readings and photos of stone circles found under Loch Ness. I will try and scan them in and send them to CFZ to pass on to you Lizzie
They are from when the water level was not so high and people will have lived and worshiped perhaps closer to the loch, the areas now covered by water(if that makes sense)