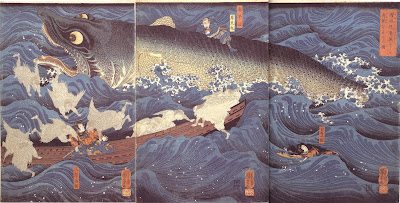 UTAGAWA KUNIYOSHI, JAPAN’S MASTER OF THE MACARBRE AND MONSTEROUS

Anyone who knows me will tell you I have an obsession with Japan, and in particular it’s folklore. My next book ‘The Great Yokai Encyclopaedia’ (due out later in the year) is an A to Z of Japan’s monsters. Japanese monsters or yokai a 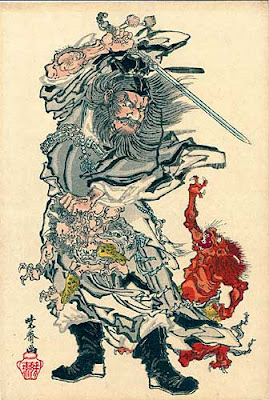 re mindbendingly weird, but I won’t give too much away here, you will have to buy my book!

The Royal Academy of Art is currently (until the 5th June) holding an exhibition of the work of Utagawa Kuniyoshi, one of the most celebrated Japanese artists of all time, and one who excelled in painting yokai.

Of course, as a yokai obsessive, I had to go. In fact I visited the exhibition twice. It was an eye-popping experience.

Utagawa Kuniyoshi was born in 1797, the son of a silk dyer. By the age of twelve he was producing impressive drawings that caught the attention of the renowned artist Utagawa Toyokuni whose studio he joined. He worked in the Ukiyo-e style of woodblock art. Ukiyo-e, or ‘The Floating World’ was a genre that transended the mundane, everyday world. It revolved around pleasure, entertainment and living for the moment. Kuniyoshi was one of the first Japanese artists to use the more brightly coloured western dyes and paints in his pictures. He was also the first to incorperate western perspective in his work. This made him unpopular with critics. He was, however, massivly popular with the ge 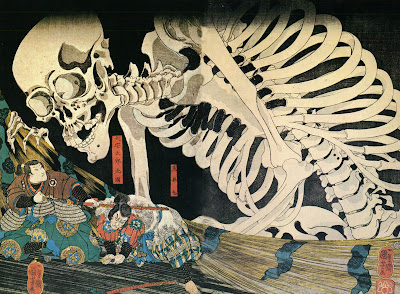 neral public. So much so that there were even Kuniyoshi pirates who did knock-offs of his prints!

Kuniyoshi had a number of themes to which he returned again and again. One was great warriors from history and legend. He painted the heroes of the Chinese classic tale The Water Margin in spectacular action poses. He was also fond of painting beautiful women from history, folklore and from contempory life. But it is for his grotesque monsters and ghosts that he is most famed.

A nuber of pictures depictiong yokai were on show in the exibition. One of the most spectacular shows th 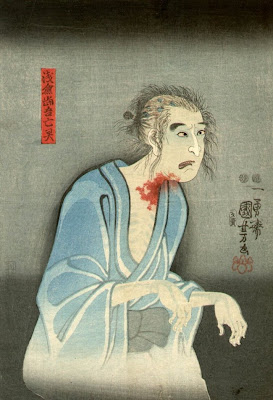 e horrific Gashadokuro, a giant cannibal skeleton. It is 90 feet tall and created from the bodies of those who died in famines. Gashadokuro bites the heads off its victims and its coming is heralded by a ringing in the ears. The painting depicts a story from the 10th century in which a provincial worlord called Taira-no-Masakado led a coup against an outpost of the central government untill he was killed by his cousin Sadamori. He was dismembered and beheaded as a warning to others.

Taira-no-Masakado’s head carried on living. It leered and laughed and eventualy flew away. His daughter, outraged at the treatement of her father’s body, prayed at the ancient Kifune Shrine in Kyoto untill her outrage was given form in a in a monsterous skeleton.

In another picture we see the renowned hero Yorimasu doing battle with the Nuẽ, a sort of Japanese Chimera. The Nuẽ has the head of a monkey, the legs of a tiger, the body of a tanuki and the tail of a snake. In 1135 the Emperor Konoe whilst at his palace in Kyōtō began to suffer dreadful nightmares. He became very ill and it was noticed that a black cloud appeared on the palace roof at 2 am each morning. The Minamoto hero Yorimasu shot an arrow into the cloud. Out of the dark miasma fell a dead Nuẽ.

Yorimasu threw the weird carcass into the Sea of Japan. The body washed ashore in a bay and the locals, fearing a curse buried it. The mound under which the Nuẽ lies is still there today, but to my knowledge no one has ever excavated it.

Yorimasu features in another spectacular work by Kuniyoshi in which he battles the titanic earth spider or Tsuchigumo. Once the great Yorimitsu fell ill and was confined to his mansion in Kyoto. He had many servants so it did not bother him that he did not recognize the boy who brought him medicine at midnight. But as the days drew on Yorimitsu became more and more ill, and suspected the boy of poisoning him.

One night Yorimitsu attacked the boy and slashed him with his sword. The youth spat a vast web about the warrior and bound him to the bed. One of Yorimitsu’s lieutenants heard the commotion and ran to his aid. He met the boy in the corridor and once again the strange youth sprayed out a giant web, pinning the man down whilst he made his escape.

The boy was tracked to a cave, where his true form - that of a giant spider - was descovered. The monster was overcome and slain. At the monster spider’s death it’s vast webs disintigrated and Yorimitsu’s strange ailment vanished.

Another story has the Tsuchigumo manifesting as a beautiful woman leading an army of yokai. Yorimitsu and his friends do battle with the bestial hord. Yorimitsu hacks at the woman and her followers vanish as if an illution. The hero follows the woman to a cave were she transformes into a monsterous spider. After a desperate struggle Yorimitsu slashes her asunder. Even in death the Tsuchigumo vomits forth hundreds of spiders the size of human infants from it’s innards. Yorimitsu and his retainers claim claim total victory only after having made sure every last one is slain. Yorimitsu was wielding a sword named "Kumokirimaru" (spider-cutter).
Both stories feature in the exhibition. In the former we see the earth spider, its bloated body covered in eye-like markings, bearing down on the hero and entwining him in its web. In the second we see the Tsuchigumo vomiting forth, not just spiders but a whole army of spirits and monsters.

r jaw-dropping picture we see a whale-sized fish shashing the boat of the samuri Minamoto no Tametomo. Winged bird men or tengu swoop down to snach him from the waves that are engulfing his wife and child.

From a cryptozoological view point the most intresting painting was Asahina Saburo and the crocodiles. It shows a Japanese warrior in battle with two crocodiles on a beach in Japan. Crocodiles are not native to Japan but are known to the Japanese as wani. In fact the huge Indo-pacific crocodile has been known to occasionally stray into the waters around the southernmost Japanese islands. German traveler Englebert Kaemfer encountered a dragon worshiped in a Japanese temple in 1690. He tells us that he saw…

“A huge four footed snake, scaly all over the body like a crocodile with sharp prickles along the back; the head beyond the rest monstrous and terrible.”

However the creatures doing battle with Asahina Saburo have turtle-like fins that make them look more like Mosasaurs than crocodiles. This could be, of course, that Kuniyoshi had never seen a crocodile and was filling in the gaps in his knowlage with his imagination, but you never know.

In a more sedate and muted picture Kuniyoshi depicts Arhat Handaka, a spiritual hero and Guardian of the Buddhist Doctrines, summoning a rain dragon from a rice bowl.

These are only a handful of the monsters that Kuniyoshi depicted in his long career. I would urge anyone in the UK to hurry down to the Royal Academy of Arts and see this amazing exibition whilst you still can.

http://www.royalacademy.org.uk/exhibitions/kuniyoshi/
Posted by Jon Downes at 9:59 AM

Great post. I especially found it interesting. For this matter, once I discussed with one of my friends, www.geonlineservice.com not only about the content you talked about, but also to how to improve and develop, but no results. So I am deeply moved by what you said today.