MORE ON THE PAINTED LADY MIGRATION 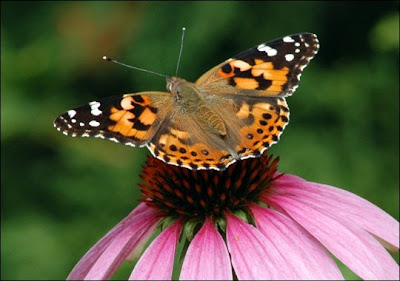 The following, compiled by Paul Batty, is taken from the latest edition of the Entomological Livestock Group monthly newsletter which arrived in my e-mail inbox this morning:

PAINTED LADY MIGRATION (C.cardui):
Since the first news of the mass northwardly migration of cardui, mentioned by Neil West & others in France & Spain, theweather has been poor here in the UK, but it's improved a little and reports from all over the UK are now coming in.
Sunday 24th May was a very nice day here and the migratingPainted Ladies had reached central England - Barry Ottewell reported seeing a dozen or morepassing through his garden near Melton Mowbray, Leicestershire. Since then, dozens of reports have been coming in.
Tim Jenkins writes... "Re. Painted Ladies I have seen a dozen plus in Coventry, all belting northwards without stopping".
Andy Green writes... "Single Painted Lady in my Garden at Little Sutton Lincs. 26th May but no Red Ad's yet.".....
Rupert Witherow e-mails.... "Painted Ladies - At Bucklebury between Reading & Newbury yesterday, 25May, in one field I counted 4-6 per minute non-stop throughout the afternoon from 1300-1730and still going strong then. Sometimes it got up to 10+ per minute. Mostly singles, butsome in 2's & 3's. Only occasionally one would stop to refuel, but a whole field of buttercups and other wild flowers was completely ignored. All flying due North and really steadily".
David Longdon wrote.... "Painted Ladies flying through North Norfolk today heading towards the coast literally hundreds - its going to be a bumper year I hope" (24th May).
Also from Norfolk, Andrew Freebray mails..... "Further to our colleagues reports in the ELG list a couple of issues back regarding the migration of Vannessa cardui (Painted Lady) through France, I wonder if any other member witnessed today's migration. It is Sunday (May24th) and after watching the Monaco Grand Prix on the TV (well done Jenson!) I sat out in my back garden in mid Norfolk and in a strip of approximately 20 yards wide and bounded byhigh sycamore trees I noted 131 cardui between 3.20 and 3.45pm after which I gave upcounting. The butterflies were all flying North at a height of between 20 and 40 feet and the migration continued at much the same rate until 5.15pm with only a few stragglers thereafter. Given my somewhat restricted viewing theatre the mind boggles at the possible numbers of this butterfly flying over Norfolk today and should we be blessed with a decent Summer this may turn out to be a cardui year".
Phil Lewis writes..... "Have seen at least 3 today in Abingdon and Oxford - good news!!!"
Terry Sparks writes... "For the record, 5 Painted Ladies passed through my garden in north Wiltshire in just over 1 hour thismorning - 24th"......
Malcolm Beeton tells us there were "Six painted ladies yesterday morning Sunday 24th May! on a lavender bush in Bushey Hertfordshire at 09.30 am."......
Tim Huggins adds.... "On Sunday morning in Diss, Norfolk I watched C.cardui streamingthrough a friends garden. I lost count but reckon they were going through at numbers in excess of 100 per hour. It was very purposeful, contour-hugging flight at 5 - 15 ft above ground level and all heading N/NW, a bearing that will probably take them to Scarborough!".
Pete Friedrich writes.... "There's Painted Ladies by the shedload in my neck of the woods - it's been a spectacular sight seeing them covering the Ceanothus bush and Red Valerian in my garden during this weekend" - [Clacton, Essex].
David Longman (Southampton) sent me a text (Yep, Batty does have text from time to time) to say that there were loads of P/L's passing through that afternoon (25th) six at a time and the odd Silver Y (Autographa gamma).
Mark Jenkins writes.... "Loads of Painted Ladies in Buddleigh Salterton Devon, at the weekend, coming in off the sea, feeding on the plentiful Valerian in town and on the cliffs.Also fair numbers seen when travelling back to Dorset in the early evening." Many, many more sightings.... If I've not mentioned yours, sorry...
I and my colleagues here on the CFZ bloggo sincerely suggest that you join the Entomological Livestock Group. It is a massively worthwhile thing with which to be involved:
http://www.pwbelg.clara.net/
Posted by Jon Downes at 10:23 AM

We've been watching them flying over the garden in Pembrokeshire nearly all day, although they appear to be going in a more westerly direction, although I suppose this could have something to do with air currents round these parts. There must have been hundreds - we counted 20 in about 5 minutes.