I FINALLY found the cable to plug my phone into a computer so here are the photos from that exhibition I've been promising you for the last 90 years.

The artist is Helen Fielding. She's from Lees and grew up there and all the paintings are of things that happened in her childhood during the Edwardian era.

AFTER THE DAY OF JUDGEMENT depicts Belle Vue Zoo animals in Lees the day after a great fire in 1910 while the artist's aunt tells stories. Apparently the animals escaped from the zoo during the fire. One the tigers actually belonged to a private individual called Biddy Murphy, though. 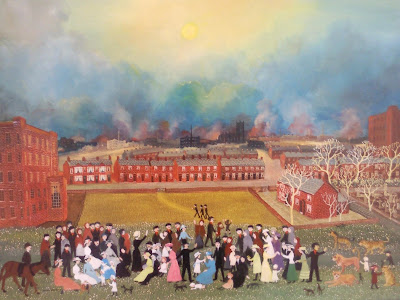 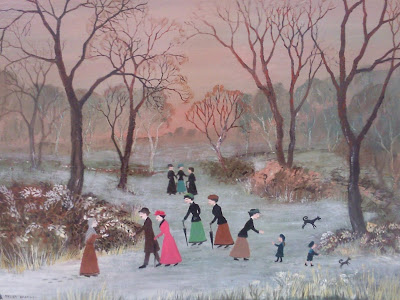 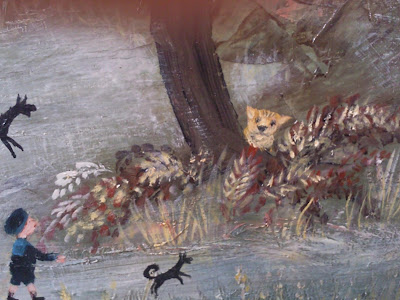 MISTY NOVEMBER depicts Helen Fielding in some woods in Blackpool. Her brother saw a tiger in the bushes and thought it was their neighbour, Biddy's tiger. This was in 1906. Since Biddy's tiger was still in Lees, either the little boy imagined it or this was a big cat sighting! (Hopefully the latter!) Anyhow, the pictures are attached and for any CFZ readers that might live up North, the exhibition is open in Touchstones, Rochdale town centre till 1st June.

Look after yourself and God bless

Those dogs almost look like laikas, a breed of Nordic dog that is found in several different strains in Russia. The people who live where the Amur tiger live have laikas, which were used to hunt tigers. I wonder if the artist got the idea from those dogs that were used to hunt that subspecies.

Here's an East Siberian Laika, the purebred and standardized version of the one the Amur foresters once used against the tiger:

Could be. Thanks for the link. Those dogs appear in all the paintings in the exhibition, actually; not just the crypto ones so I assume were Mrs Fielding's trademark like the furniture company who carve mice onto all their stock

Today I found out that the exhibition is actually on until June 14th, not 1st (today) as I originally posted. Sorry!