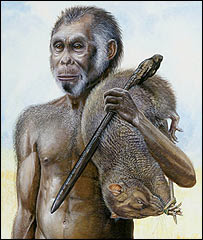 Scientists have found more evidence that the Indonesian "Hobbit" skeletons belong to a new species of human - and not modern pygmies. The 3ft (one metre) tall, 30kg (65lbs) humans roamed the Indonesian island of Flores, perhaps up to 8,000 years ago. Since the discovery, researchers have argued vehemently as to the identity of these diminutive people. Two papers in the journal Nature now support the idea they were an entirely new species of human.

The team, which discovered the tiny remains in Liang Bua cave on Flores, contends that the population belongs to the species Homo floresiensis - separate from our own grouping Homo sapiens. They argue that the "Hobbits" are descended from a prehistoric species of human - perhaps Homo erectus - which reached island South-East Asia more than a million years ago.

See arguments for and against here: http://www.newscientist.com/article/dn17081-bigfoot-hobbit-could-be-ancient-island-human.ht