NICK REDFERN: Snaking Around the Cemetery... 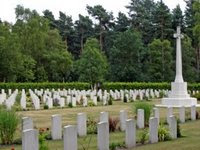 Well, yet again there is high-strangeness afoot in the woods of Britain's Cannock Chase - and specifically in the vicinity of its German Cemetery.

As regular readers will know, the cemetery in question has been a veritable hotbed of weirdness for years: Bigfoot, werewolves, hairy-sprites, ghosts, marauding black-cats, and spectral black-dogs have all been seen roaming amongst the old war-graves.
But, now there's a new player in town: a giant snake that has been seen slithering around the area. As the story shows, this is not the first time that similar beasts have been seen on the Chase (I investigated a case myself a number of years ago that reportedly occurred in the blisteringly hot-summer of 1976).
So, what are people seeing? Are they regular snakes or something else? From the descriptions, they could perhaps be pythons. However, the problem is that such creatures would not last long when the cold, harsh winter sets in.
And yet such creatures have been seen for years on the Chase, which begs the questions: if they are regular snakes, how are they surviving those aforementioned harsh winters year-after-year? And why are the snakes (like all of the other odd beasts seen on the Chase) now homing in on the German Cemetery?
Truly a mystery of Fortean proportions!
And if that were not enough, we have a new big cat sighting in the area; and a UFO encounter!
Posted by Jon Downes at 8:19 PM

Richard, could this just be a question of human perception rather than of weirdness? A cemetery, especially a war cemetery encourages people to slow down, become reflective and above all stay quiet and gaze around the area; exactly the things one needs to do to spot wildlife moving about in the general vicinity.

On the whole, people tend to be extraordinarily unperceptive when moving about outside, and most wildlife is by contrast extremely aware of cover and how much highly visual predators like humans can see of them. Most fields look flat to human eyes, but almost all aren't and have minor undulations which create a lot of dead ground into which an animal can creep and crouch, and successfully evade the gaze of people.

By contrast, the German Cemetery is a seriously weird place. It is dead flat, with a geometric pattern of gravestones meaning vision is obscured in some directions but an observer moving about will get predictable open lines of sight. People know all about this phenomenon, but animals wouldn't have a clue, and would perceive the Cemetery as a nicely secluded, quiet sort of place with plenty of cover to hide from the unusually non-inquisitive humans in the area.

So, if you add to this a marked propensity for people to stop, stare all around and generally up the perceptiveness level a lot and an environment that is pretty barren yet fools wildlife that it is nicely protective, and you have an area that ought to generate sightings.

The Chase, of course, has a high incidence of paranormalesque 'portal guardian' style doggy associations.

But the other critter you'd expect to be closely associated with the Dog (according to esoteric Death/Life iconography) is precisely the Serpent, viz Mit(h)ra(s) the Bull-slayer, and the Tarot card The Fool, (the serpent disguised as a Moses-style staff).

Traditionally, snakes are viewed as messengers of the cthonic gods and, as omens, signal the onset of monumental - completely unexpected - earthquake-like upheavals.

For instance, by a curious coincidence, Nick, your '76 serpent presaged the overthrowing of Rock's dinosaur bands by Punk, and the imminent arisal of Marageret Thatcher, after which Britain, (or, indeed, the world) was never quite the same.

And that one was only seven foot - this one's twice the size!