GWILYM GAMES: The Strange Case of the Mutant Toadman of Accrington 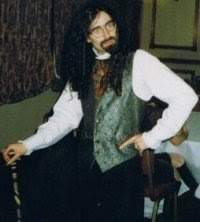 It is always a pleasure to introduce you to a Guest Blogger. Gwilym James first impacted onto the cryptoverse (hey, I think I invented a new term there, and if something as ungainly as `blogosphere` can become international parlance, then I am sure that `cryptoverse` can become the accepted term for the er... cryptoo, universey place thingy) when he became involved in a hunt for a crocodile in Swansea last year... 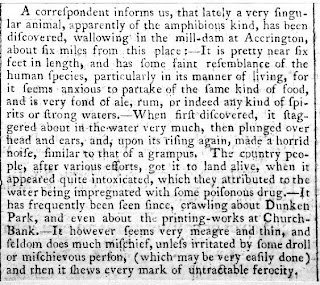 What was this weird sounding amphibious man-beast? All sorts of strange humanoids have been reported in Britain over the years from Owl-man to the mysterious Man-monkey of Ranton. Could this be another addition to their ranks? Should I dash off to Accrington to see if this horror still lurked there? In Lancashire strange things still lurk the CFZ investigated reports in 2002 of a “lake monster” in Martin Mere in Ormskirk attacking swans, a beast which was probably a large catfish. Jon discusses this case and the local folklore concerning a mermaid in the area in his book the Monster of the Mere.

I thought more research was needed however into the history of the area before getting too excited. My investigations revealed that the area in which this “Toadman” was supposedly seen was at the time the cradle of the industrial revolution in Lancashire, a revolution which later spread across Britain and from there to the world, and an important part was played by Sir Robert Peel senior, (1750 – 1830), the father of the famous Prime Minister Sir Robert Peel. Near Accrington is Stanhill where the inventor of the Spinning Jenny, James Hargreaves lived, and his device was used in Robert Peel’s Cotton Mill at Brookside, Oswaldtwistle. In 1768 the mill was attacked by angry home based cotton workers who thought Peel’s use of spinning jennies in large quantities would destroy their livelihood. Eventually Peel moved away from Brookside by 1779, and he had already set up another works in 1772 which involved the printing and dying of calico and these were the printing works at Church Bank, Oswaldtwistle, mentioned in the article. This involved various chemicals which undoubtedly would be disposed of in nearby water courses such as the River Hyndburn, which is the river which the "Toadman" would have lurked. Peel’s works were part of the expansion of cloth industry and made the family very wealthy leading to Peel and his son both becoming MPs . One result of this industrial expansion and chemical experimentation was the work of John Mercer from nearby Great Harwood (1791–1866), a pioneering chemist who discovered Antimony orange and the mercerisation process and made many discoveries in dying and printing fabric. Entirely self taught, Mercer never went to school, he later became a member of the Royal Society because of his pioneering role in industrial chemicals at Oakenshaw. As industry expanded in the area the Liverpool to Leeds Canal passed nearby to take finished cloth to port. In the nineteenth century several chemical works were established near the canal to supply textile printers, with one building formerly run by William Blythe remaining today.

When I learned that the beast was seen near the print works at Church-bank and there was much experimentation with chemicals in the area my mind boggled inspiring some strange theories. As everyone knows, well everyone who watches the right B-movies (see the excellent Korean film The Host for a prime example], the main problem with spilling with industrial chemicals and waste is that the inevitable result is gruesome mutated people or animals of one kind or another with a grudge against humanity. Was the toad-man actually a former dye worker who had fallen into a vat and had been horribly disfigured and driven mad? Did the Peelers or police force founded by Sir Robert Peel conspire to hide the depredations of the monster on innocent millworkers? Or was it a prehistoric survival possibly from the Silurian period perhaps disturbed by the quarrying and mining also found in the area? This mining at led to the Aspen Coke Ovens, at Oswaldtwistle, which are curiously known as the Fairy Caves, which still stand. Then there is the ancient folklore of Lancashire which includes numerous hostile water monsters such as Jenny Greentooth in the Ribble, the water-devils of the River Lune or the Mermaid of Martin Mere.

More careful investigation however revealed sadly that the tempting idea that the toadbeast was the hideous spawn of the Industrial Revolution was more to do with my imagination than reality. The clue comes from the curious interest of the creature in alcoholic beverages, rather than the food usually favoured by such monsters as brains, blood or spinal fluid. In fact what might seem to be a report of a cryptozoological oddity is I believe in this case more to do with local political intrigue and industrial development. As mentioned earlier the Liverpool to Leeds Canal eventually was built near this area. I discovered in my research that the canal’s route caused some controversy at the time of the article:

“As the Leeds and Liverpool Canal winds its tortuous way through East Lancashire it seems to carefully avoid Accrington. However, when the canal’s route through East Lancashire was planned in 1793, it was to continue up the valley of the Hydburn, crossing it at a point close to the old Grammar School on Blackburn Road. The proposed Haslingden Canal was to join it here, creating a waterway link with Bury and Manchester. Had this happened there would have been a wharf near the junction where goods to and from the town could have been handled.

Instead the route was altered. The Peel family asked the canal company to avoid crossing the Hyndburn above their textile print works at Peel Bank. At that time it was one of the largest factories in the world and used the river's waters during the printing process. Building the embankment for the canal to cross the Hyndburn would have interrupted this supply and caused production problems. Instead, the canal was built downstream, rejoining the original line at a right angle junction at Church. Much of the land for the canal deviation had to be purchased from the Petre family of Dunkenhalgh. Although they were quite happy for the canal to be built, they requested that the towpath was made on the side of the canal away from their house and lands. They hoped that this would prevent poachers from gaining easy access to their estate!” [1]

So it is seems likely that as well as a reference to the Peels that the Dunken Park reference in the article is an allusion to the house and estate of Dunkenhalgh Park in nearby Clayton-le-Moors which was owned by the Petre family. The controversy over the canal route would have been at its height in 1793 whether it ran near the Peel’s Print works or through lands owned by Lord Petre. Thus I believe that the toad-man is in fact a satirical reference to one of the canal promoters possibly to one of the Peels or Petres, describing him as a subhuman amphibious beast, a suitable form in the circumstances of discussing a canal, as well as playing subtly on an established reputation for indulgence in strong drink in the person referred to. The fact it was seen wallowing in the “mill dam at Accrington” may be another clue but there were already a number of cotton mills in Accrington and I am uncertain to what it refers to. Some local historian could probably work out the toad-man’s identity with more certainty. It is another case where a playful newspaper article has created a false mystery as in the Angel of Mons or the exaggerated mystery attached to Spring Heeled Jack, seen in Lancashire amongst other places, as a result of later Victorian newspaper sensationalism. It is another example of how the Fortean researcher should be careful to investigate the history of reports before leaping to outrageous ideas no matter how tempting.

Yet there is another aspect to the case which adds to its intrigue for there is a gruesome side to the history of the Petre family. Early in the eighteenth century supposedly a visitor to Dunkenhalgh Park had an affair with the Petre’s French governess, Lucette. He heartlessly ruined her, made her pregnant and then abandoned her. In despair the governess drowned herself in the Hyndburn. Her sodden ghost or boggart still haunts Dunkenhalgh Park and on the witching hour of midnight on Christmas Eve it supposedly can be seen climbing from the river near the bridge where she leapt to her death and then laboriously moves towards the house. So if the newspaper article is aimed at the Petre family then it seems possible that the toad-beast is perhaps also an obscure reference to a local scandal which produced a legend of an aquatic boggart.

Nick Harling also found a reference in the paper from 1794 to a strange creature found in Hooton Roberts in Yorkshire, a fourteen legged lion headed thing which is either an even more arcane reference or a genuine cyptozoological oddity.

1 - The History of the Leeds-Liverpool Canal . http://www.facebook.com/l/;http://www.cottontown.org/page.cfm?pageid=2594