A FEW WEEKS AGO WE ASKED VARIOUS BLOGGO REGULARS TO TELL US WHAT WERE THEIR TOP THREE FAVOURITE MYSTERY ANIMALS... AND WHY. AND NOW WE ARE INTO THE LAST THREE..... 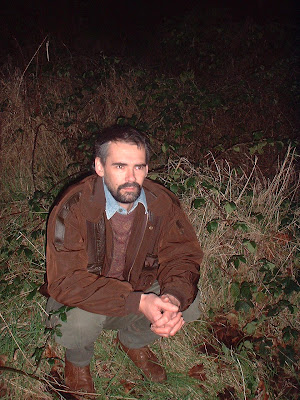 I’ve had the fun of joining in the hunt for a Lake Monster. Readers of Jon Downes’ book, The Monster of the Mere, will be familiar with this tale, which started early in 2002. Newspaper reports said a mystery ‘something’ had been attacking swans at a nature reserve in Lancashire; a giant unknown creature has been seen dragging fully-grown swans beneath the water at Martin Mere. So, off we went.

Now, a swan’s wing can break a man’s arm, so I wasn’t wholly convinced that it was safe to go out on the water, hunting this swan-killer, in a small inflatable dingy... nonetheless, I sailed forth on the murky waters. It amuses me that, although I was out on the water, paddling around with all the fancy sonar gear and a video camera, it was Richard Freeman, standing on the bank of the lake, who actually saw the monster and identified it as a Wels catfish.

I was duly informed that it was probably as big as a domestic settee (sofa) and had a mouth roughly of the aperture of a domestic rubbish bin, so I was still a bit dubious about paddling around. It wass reassuring to hear that they eat insects and fish and small mammals, but suppose it decided to embark on a gastronomical upgrade, just as I was passing overhead?

However, it didn’t; and I’ve remained intrigued by the Lake Monster theme ever since.

Still on an underwater tack, I like reading about the strange ecosystems being found around hot-water vents on the ocean floors. The foodchains there, which include normal sea-type animals such as fish, crabs, and shrimp, don’t depend on plants, since sunlight can’t penetrate such depths and allow any plants to photosynthesize. Instead, bacteria that are able to convert sulphur found in the vent's fluids into energy are the bottom of the foodchain.

This conversion process, chemosynthesis, is an interesting demonstration of the tenacity of life in gaining footholds in unlikely spots. The creatures that live in these spots also have to contend with mineral-rich hot vent water, and of course the tremendous water pressure found 2 or 3 km beneath the ocean waves.

It’s like finding alien life, but it’s here on this planet.

I suppose it could be argued that Big Cats used to roam the area now known as the UK, and so they’re not alien at all; they’ve merely regained some old hunting grounds. It could also be argued that there’s enough evidence for pumas in the UK countryside for them to be no longer regarded as a mystery: they’re just there.

The man reasons I find the Big Cat scenario interesting are: the candidates are plausible (escapees or releases, possible relict survivors); I’ve met several candidates in captivity and liked them; and there’s plenty of food for them in the UK, so their ongoing survival is readily explainable.

Around 10 years ago, on a CFZ excurtion to Dartmoor, I was in a puma enclosure at Dartmoor Wildlife Park. I sat cross-legged on the ground and kept still, hoping some of the pumas would be curious enough to approach this visiting stranger. One eventually did, coming to within about 18 inches of me. Others plodded around me in circles, looking suspiciously at me.

The thing that struck me most, as I looked around the enclosure while sitting in the centre of it, was how elusive those pumas were. There wasn’t a massive amount of cover available, yet I could seldom see more than two or three at a time. If they stood or lay still, and were behind a bush or even a few branches, they seemed to fade away and become almost unspottable. I saw they’d brought self-effacing to a fine art.

So... the failure of people – not least, police marksman – to find them in the general countryside does not surprise me at all. I would be amazed if a group set out to ‘round up’ a puma, and then suceeded.

I like the thought that pumas inhabit our countryside, and I know that if I leave them alone, they’ll leave me alone. I think they’ve as much right to be here as I have.... or possible even more!