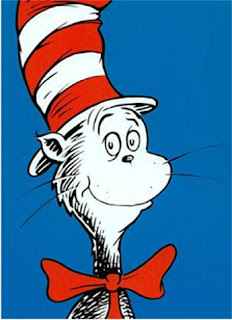 This morning I got an e-mail from Darren Naish thanking us for having published a peice relating to his discussion about a new Indian mystery cat yesterday. We were happy to do so, because Darren is one of the good guys in a field filled with self-styled pundits, and always has something interesting to say. We were also impressed by his horribly Suessian pun the "Cat in the Ghat"

So in the spirit of the late great Doctor S, (and throwing down the gauntless to Darren, challenging him to somehow get `green eggs and ham` into a Tetzoo posting in the next week)

"And NOW comes an act of Enormous Enormance!
No former performer's performed this performance!
but Darren's surpassed himself better than that
by pulling another cat out of his hat"

OK, what he actually did was to visit the museum in Winchester where, amongst other things, he photographed the semi-legendary Hayling Island jungle cat.

However, he also wrote something which struck a deeper chord with me than anything else he has written in the past fifteen years of our friendship:

I took Will (my 7-year-old) along, and he loved it, spending literally hours looking through drawers of pinned insects and at stuffed things in cases. I see every indication that kids are naturally fascinated by animals and other living things: it's just that this interest is often not switched on at the right moment, nor is it nurtured or encouraged.

I live to give! And, yes, I thought of you and your words when writing.

Jon Downes said...
This comment has been removed by the author.
5:54 PM

Regarding the photo of the new cat species, in my very humble opinion, it can’t be Oreailurus jacobita. Compare your photo
HERE
with the Andean Cat
HERE

You’ll see they are similar, but not similar enough, even taking colour variations into account.

The head shape is different (although this could be that the 2 cats are different sexes). The stance of the cat on your website is different – it is less stocky... more slender, almost regal. I realize the 2 photos are taken from different angles, but it wouldn’t make that much difference.

The stripes on the front legs are very different in the 2 pictures. Even taking into account regional variations, it seems too much of a difference to me. The markings on the head, you have identical stripes running from the far edge of each eye (away from the nose), but on your picture there is also a tear-stain dark mark similar to the one seen on cheetahs. This seems to be missing on the cat in the other picture.

I think you are right – you got a new species there.