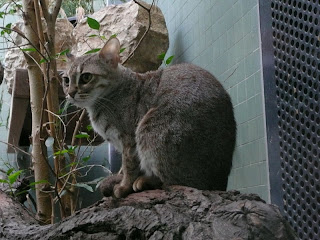 2009 has already thrown up some interesting surprises on the Indian subcontinent, with at least two wildlife sightings of note.
Indroda National Park is a nature reserve in Gujarat on the west coast of India, near the border with Pakistan. They have a museum and a zoo, and according to their website:
"In addition to the animals in the zoo, the wilderness created in an area of about 400 ha at INP is inhabited by a large number of animals, birds and reptiles. This includes around 180 species of birds of which 65 have been reported to be nesting here. The park is, in fact, a paradise for bird watchers. Moreover, the common venomous and non venomous snakes are abundantly found in the Park. As per the census conducted in 2004 by the Foundation, the wilderness of the park has 545 Nilgai, 475 common langurs and 819 peafowls."
However, they now have a rare, and totally unexpected resident - a Rusty-spotted Cat - one of the smallest species of cat in the world. The Rusty-spotted Cat (Prionailurus rubiginosus) only measures 35-48 cm (14-17 in) in length, plus 15-25 cm (6-10 in) tail, weighing in at only approximately 1.5 kg (3.3 lbs). A healthy adult female can weigh as little as a kilo, which makes it arguiable that it is even smaller a species than the black-footed cat (Felis nigripes) of southern Africa.
GEER, the organisation who manage Indroda Nature Park are understandably making quite a big deal of the sighting. CN Pandey, the director said: "Last night, GEER staff was patrolling when they spotted this cat and photographed it. It is rare to spot this cat in Indroda Park let alone the state. In the past it has been spotted in Surpaneshwar in south Gujarat and by Bharat Pathak in Gir forest."
It is not a particularly rare species, being classified as "Vulnerable" but it is nice to hear of a species increasing its range.

The other notable wildlife sighting of the year so far, in India at least, is the "hyaena" reported from Kolkata (Calcutta) airport. It was seen by a pilot coming in to land who "promptly reported the sighting - probably a stray dog or one of the jackals that live in the airport grounds - to air traffic control. Officials in the control tower asked a Jet Airways flight from Mumbai, scheduled to land in a few minutes at 6.50 pm, to hover over the city. As an inspection was carried out to check for the presence of the animal, the Jet flight was delayed by 10 minutes.

Airport officials later said they immediately carried out a spot verification on the runway , but could not find any animal".

This species os commoner than the rusty spotted cat, being graded as `Near Threatened` and having a range that covers parts of the Middle East, Africa and bits of India and Pakistan, but it is unusual to have a report from a major international airport. 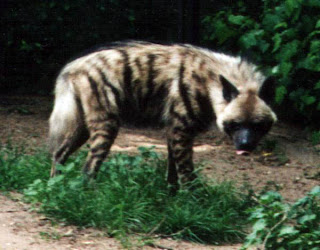