Fish You Were Here – Naturalised fishes of the world Part One

Until about 200,000,000 years ago, all the Continents that we know today were joined together into one a super-continent called Pangea. Very few of the animals and plants which can be found today, were found there - in exactly the same form - and it is unarguable that the process of continental drift has contributed largely to the amazing diversity of life on the planet today.

Wherever mankind goes, he brings a host of other animal species with him. Some of these are well known. The brown rat, the domestic cat, the domestic dog, the pig, the horse and the goat, for example. Less well known are other species of animals - for example birds, small mammals, reptiles and fish that mankind has translocated - by accident, or design - from one part of the world to another.

In this two-part article, we will give an overview of some of the more important, and bizarre, incidences of naturalised fish species, and will reveal how, without meaning to, the human race has allowed the biggest mixing of global fish species there has been known this since the days of the super-continent.

There are three main ways in which the process of naturalisation can occur.

These are as a result of:

It would be nice to be able to finish this article by giving this simple list of species in each of the above categories. However, the machinations of the natural world are, as Oscar Wilde put it, never pure and seldom simple, and much to the surprise of the present authors the genesis of some of the more peculiar naturalised fish species is highly complex.

For example, take the giant gourami (Osphronemus gouramy) - an enormous species which can - in extreme cases - which over three feet in length. Originally these enormous fish were found in the rivers and ponds of Indonesia where it can often be found in a brackish water, and oxygen depleted water as well as rivers and ponds. However they have been introduced to a wide range of countries across the world. The earliest introduction that we have been able have to pinpoint was in 1761 when colonial French authorities imported large numbers of these fish from Batavia to their colonies in Mauritius. Their eventual intention was to transplant these remarkable fish to the homeland of France herself. Although it seems that these experiments never took place, the French colonial authorities also introduced them to Madagascar in 1857. 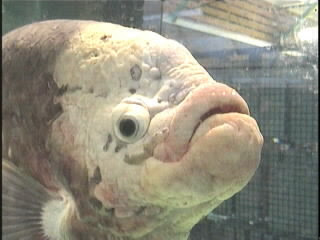 In 1841 the first attempts were made to introduce this species to India when they were introduced to the Botanical Gardens in Calcutta. However, this experiment was unsuccessful and the stock died out. However, in 1865, Sir William Denison - the Governor of Madras - was so struck by the attractiveness of these giant fish that he introduced them to several waterways surrounding the Government House in Madras. Other introductions at same time were made in Nilgris, and quite possibly in other parts of India as well. The burgeoning population was boosted by at introduction of another 200 specimens which, bizarrely enough, were from the already well-established population in Mauritius making them second generation transplants. They were introduced to Papua New Guinea and New Caledonia in 1956 by an Ichthyologist called H. Van-Pel. Whereas it is a matter of record that the introductions into India and to the French colonies in the Indian Ocean were purely because those responsible felt that the fish were attractive ornamental creatures, the raison d'etre behind these later introductions remains obscure. They were introduced into Sri Lanka, (1909) and the Philippines (1927), for aquacultural purposes, but possibly the most interesting was an accidental introduction into a waterway in Colombia in 1988. In this case the fish escaped from captivity, but we have to say that we are mystified as to the precise mechanism or on axle until escape of creature that can reach such enormous size.

In some cases, the introduction of an alien species can wreak havoc upon an insular or isolated ecosystem. Whereas the giant gouramis have caused little or no damage to the ecosystem because of a their vegetarian lifestyle - indeed in some places are they have been used to clear matted weed from overgrown waterways - other invasive species have had a far more significant effect. Possibly the most notorious of these is the Nile perch (Lates niloticus) An enormous and ferocious game fish which can grow up to six feet in length and which has a fearsome reputation both amongst anglers and the aquaculture community. Originally from the Nile and from the rivers and lakes of West Africa, they were introduced in two various East African river and lake systems in a wide ranging exercise which was first mooted by the colonial authorities in the 1920s, but which did not take place until 30 years later. The British Empire is responsible for several inadvertent acts of zoological genocide. The introduction of foxes, weasels and stoats and New Zealand - for example - caused enormous amounts of damage to the local wildlife as did introduction of similar animals on to island ecosystems in the Indian and Pacific oceans. However, it was the introduction of this fish into East Africa that was arguably the British Empire's worst eco-atrocity. Within only a few years of the initial introductions, it was noticed that the main item of prey for this ferocious predator was the local cichlid population. The cichlids of the Rift Valley have been compared to Darwin's finches on the Galapagos Islands as living examples of the mechanism of evolutionary Biodiversity. It is certain that some entire species of cichlids were wiped out by the Nile perch before they were even recorded and named by scientists. Until someone invents time-machine we will never know quite how much irreparable damage the introduction of this single species of fish has caused. In 1987 it was claimed that Nile perch made up over 80 per cent of the fish biomass in Lake Victoria - an amazing feat for a species which had only been in existence there for 30 years. An unforeseen side-effect to of the introduction of the species is the disappearance of the local Forest. Because the local fishing population now has to subsist almost entirely on the species the eating and cooking patterns the local population have also changed. Because of the flesh of the Nile perch is very greasy it has to be smoked or fried rather than sun-dried and the search of the necessary firewood has had grave results.

The Stone Moroko (Pseudorasbora parva) is a small fish of the family Cyprinidae. It is naturally found in many parts of Asia, especially those connected to the basin of the Amur river. It is a small, insignificant fish of no commercial value either to the aquarist or the fishermen. However, it has spread from its homeland across much of Europe, Asia Minor, and what used to be Soviet Central Asia, and even as far as Fiji. Its eggs and fry have been imported to all these places in shipments of Chinese carp, grass carp, and silver carp. In Europe, because of its population density and success in breeding, it is becoming a serious competitor to many native species and in Uzbekistan it - for example - its success at naturalisation has a seriously displaced many invaluable native food species. 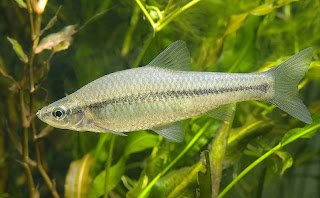 In part two of this article (tomorrow morning) we will see how even the waters of the United Kingdom have been invaded by alien species from all over the world.
Posted by Jon Downes at 6:00 PM