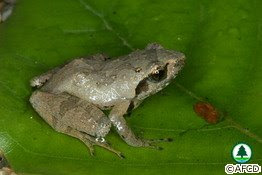 I want to tell you a story.

One of the rarest amphibians in the world is the tiny Romer`s Tree Frog (Philautus romeri) which was discovered in a sea cave on Lantau Island in 1955. Romer's Tree Frog was named after the late J. D. Romer, who first discovered it. That population disappeared in 1953 due to the collapse of the cave. Once thought to be extinct, the frog was re-discovered on the island in 1984.Other small colonies were eventually found on two adjacent islands. In 1992, however, plans for a new Hongkong airport spelled potential disaster for the entire species.

The total population was about 1300 individuals. In order to build the airport, the island of Chek Lap Kok , just north of Lantau was levelled. It was estimated at the time that a third or more of the world population of this animal would vanish during the demolition of the island. Something needed to be done if the frogs were to ve saved.

In April 1992, thirty frogs were caught and taken to Melbourne Zoo, in Australia. They started a breeding programme and together with the Ecology and Biodiversity department at the University of Hong Kong identified suitable sites across Hongkong and the surrounding areas where these refugees could be re-released.

439 frogs bred at Melbourne were returned to Hongkong in 1994 and a further 260 captive-bred frogs were returned in 1995. They were released eight selected sites on Hong Kong Island and what was once known as the New Territories. Frogs in 7 of the sites survived. Surprisingly, a very small number of the creatures also survives in Chek Lap Kok.

So the species has been given up for dead once, and had its main habitat flattened, but still it survives. There is a lesson there for us both as a species, and as cryptozoologists. Mother Nature is more resilient than we give her credit for being. It doesn't take too much of an effort to save, or at least optimise the chances for a species. However, it takes a lot more than we often realise to destroy one. How many other `extinct` species are just awaiting a serendipitous rediscovery?
Posted by Jon Downes at 6:00 PM