Ever wonder what’s in those delicious dumplings? What gives them that special tang? The flavor [sic] that cannot quite be named? Wonder no further! For the secret has been revealed. 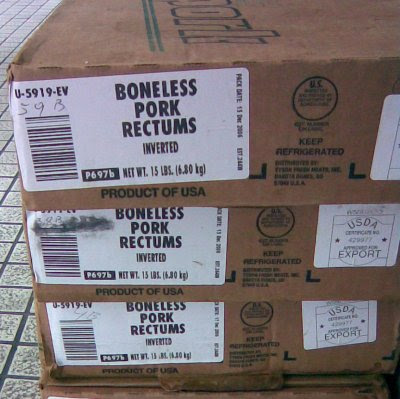 And the secret is…boneless pork rectums, finely diced. All the hush-hush is over because, through carelessness, these boxes were allowed to be photographed just before they were hustled into a restaurant in Taiwan. But now that their presence has been revealed to the world, the silence surrounding dumpling recipes can be broken.
Take a careful look at the labels. Not only are these rectums boneless—all the best ones are—but they are inverted! Culinary insiders have long known that it is only in the cheapest dumplings that one finds non-inverted rectums.
This is almost certainly because inverting a rectum is a tedious, labor-intensive process, requiring specialized skills and arcane knowledge available to only a few. We can only imagine that the apprenticeship leading to a mastery of inversion is long and grueling.